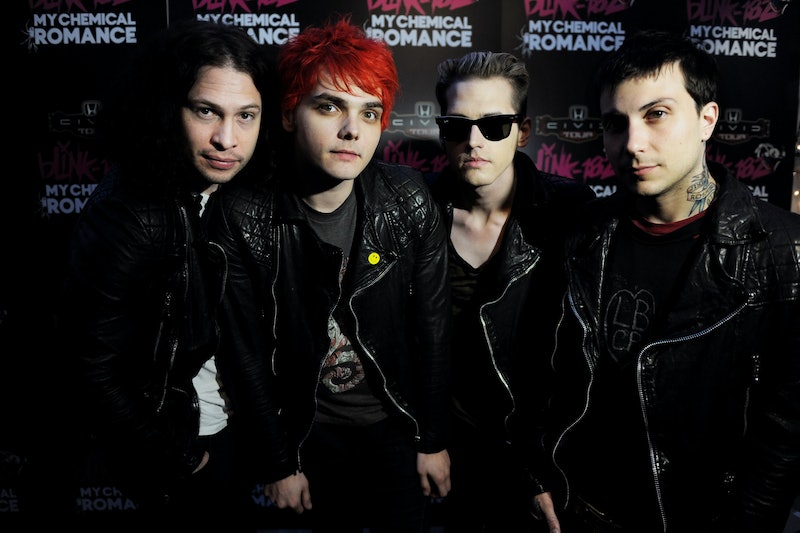 A member of the Jonas Brothers just personified the “and I oop” meme. As it turns out, a My Chemical Romance reunion might happen, and Joe Jonas has the scoop. Disregard the distressing mix up back in 2016 that led fans to believe a reunion was in the works after the band shared a mysterious tweet. Because now, thanks to a Jonas brother, fans are now equipped with much more compelling evidence of a reunion. Earlier this month, the newly-reunited brothers appeared on KISS FM UK to discuss all things Happiness Begins. During the interview, the trio discussed TV shows and rock bands that informed their youths, and, following a My Chemical Romance discussion that begins around the six minute mark, Joe revealed that he had “some dirt” on the band that split in 2013.

“My Chemical Romance apparently were rehearsing next to us in New York recently, which, I thought they broke up, so. I don’t know. That’s the gossip,” Joe said, before suggesting that he take on the role of the station’s gossip columnist. That’ll do, Joseph. That’ll do. As fans will tearfully recall, MCR officially announced their split back in 2013 to the widespread distress of many. Following the bombshell news, MCR frontman Gerard Way appeared on BBC Radio 1 and told host Zane Lowe that “it was time” for the split, and ultimately, it was “nobody’s fault.”

Way elaborated on the decision at the time, “I think we’re all pretty upset. It wasn’t an easy thing to come to. It was sad, because it wasn’t a situation where anybody hated each other,” he said. “You should always be doing new things and changing and growing as a human being.”

Now that time (precisely six whole years, that is) has passed, could a return to the Black Parade be on the horizon? All signs point to… maybe…? According to fans, former MCR keyboardist James Dewees has reportedly told attendees at recent shows that the band “might be working on something.” Dewees is currently on tour with former MCR bandmate Frank Iero and the Future Violents, and, according to concert attendees, the two have allegedly been discussing MCR during these shows. Fans on Reddit have been abuzz about a possible reunion on a discussion thread, too, with one user writing two days ago, “Oh were you at Charlotte too? I got there around 3 to wait in line and the few people there said James had told them there would be MCR news in the next few months.”

This is a lot to unpack. Unfortunately for now, these rumors remain as speculation since the former band members have not made public direct statements. Of course, former frontman Way — who has since explored other creative avenues since the split, such as his The Umbrella Academy comics and its subsequent Netflix series adaptation — has kept consistently mum about a possible reunion. However, in February of this year, Way weighed in on the possibility of a reunion for the first time in years during an interview with The Guardian.

According to Way, a reunion “definitely came into my head” during the infancy of the Trump Administration’s reign in the White House. But ultimately, he doesn’t believe it’ll happen despite the fact that he does “miss playing with the guys.”

Hey. If a Jonas Brothers reunion was possible after all the issues laid bare in Chasing Happiness, a My Chemical Romance reunion is possible. If it does happen, there’d be something poetically metaphorical about Joe Jonas, of all newly-reunited band members, breaking the news.