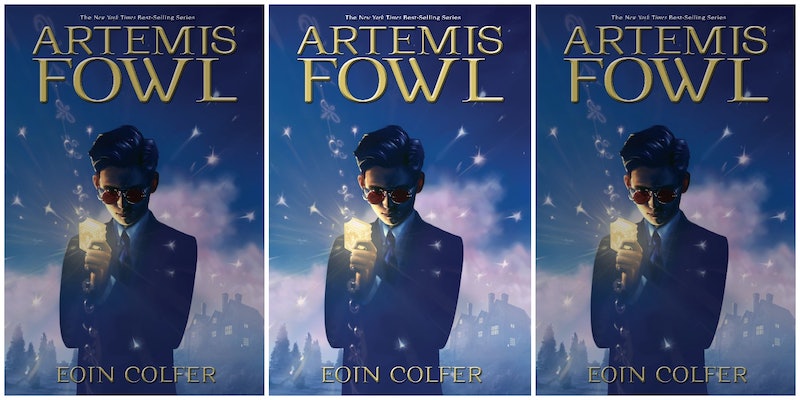 Attention all fans of fairies, and, uh, "Fowl": the wait is over. The Artemis Fowl universe is returning once again to bookshelves, this time with twins. Double the Fowl, double the fun (that's not a phrase but it's about to be, trust me).

In a statement published on Wednesday, Disney-Hyperion announced they had acquired two new spin-offs from the ultra-popular sci-fi/fantasy series. Since its birth in 2001, the Artemis Fowl series has sold more than 25 million copies, putting it in the same viral category as The Hunger Games and the Game of Thrones' Fire and Ice. The books will be penned by Irish children's book writer Eoin Colfer, who originally created the character of Artemis Fowl II, a 12-year-old millionaire and criminal genius who orchestrates the kidnapping of a fairy for the potential ransom money in order to bail out his father and save his mother. Phew. And that was just the first book. There are eight total. It's no wonder the series has been called "Die Hard, with fairies."

Colfer's two new books, the first of which will be published in 2020, center around Artemis' twin younger brothers, Myles and Beckett. The boys first appeared in the fifth book of the Artemis Fowl series, Artemis Fowl and the Lost Code. Though they're significantly younger than Artemis - they're two years old in the sixth book, and four years old in the seventh - the personalities of the boys have warranted a pretty substantial Artemis Fowl fandom wiki profile. Beckett is the creative, big and sweet; Myles is the mastermind, whose moral compass may be a bit, uh, skewed. Beckett has blond curls; Myles has the black hair of Artemis. Though no clues have been given thus far about narrative arc of the new Fowl books, you can probably begin to see some adventures shaping up. We're so excited. And so is Eion Colfer (probably a good sign).

"I cannot wait for a whole new generation of readers to immerse themselves in the magical adventures of Myles and Beckett," said Colfer in a statement. "The future is bright. The future is Fowl.”

The future sure is Fowl. In addition to the two-book spin-off deal, a film adaptation of the Artemis Fowl series is set to hit the big screen in 2019. According to IMDB, the cast currently features Dame Judi Dench (as a fairy commanding officer because DUH) and Josh Gad as a "fabulously flatulent dwarf" named Mulch Diggums.