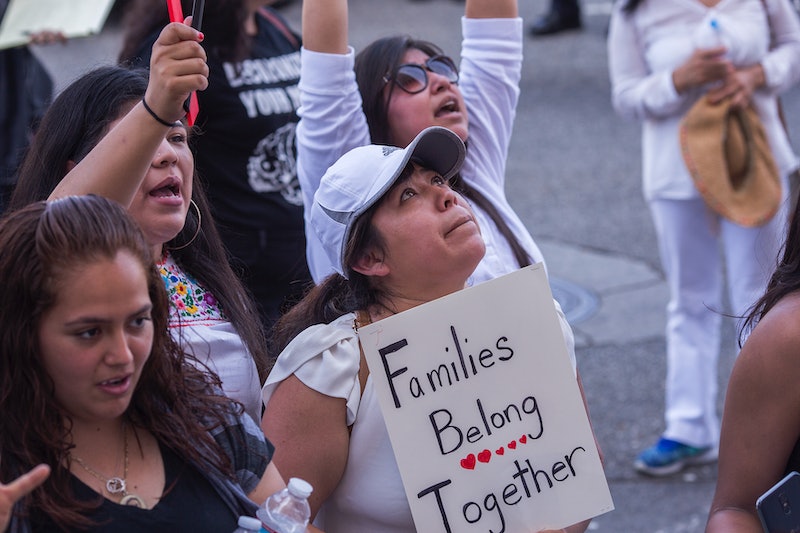 According to the Washington Post, the Trump administration is considering a new family separation plan for immigrants apprehended at the border. While a return to the policy of forcibly separating immigrant children from their parents isn't on the table, Trump officials have been weighing a plan called "binary choice" that would give parents the option of being separated from their children, the Post reports. Bustle has reached out to the White House for confirmation of the report.

Under "binary choice," the Post reports, immigrant parents apprehended with their children at the border would be given two choices: Be detained with their children for months or years as their immigration case moves through the courts, or allow their children to be released to a government facility for potential adoption by relatives in the country. Per the Post's report, it's unclear what would happen to parents who opted for the second choice.

During a six-week period in 2018, the Trump administration separated more than 2,500 immigrant children from their parents. The policy caused international uproar, and Trump, under immense pressure from Democrats and Republicans alike, eventually relented and signed an executive order ending the policy in June. As of September, however, over 600 immigrant children had not yet been reunited with their parents, CNN reports.

The Post reports that binary choice is being pushed from within the administration by senior presidential adviser Stephen Miller, the 33-year-old immigration hardliner who helped craft the administration's initial family separation policy. Despite the outrage that policy caused, Miller reportedly believes that it was an effective deterrent to illegal border crossings and wants to bring some form of it back, according to the Post.

In a statement to the Post, deputy White House press secretary Hogan Gidley said that "career law enforcement professionals in the U.S. government are working to analyze and evaluate options" for reducing illegal border crossings, though he didn't confirm that binary choice in particular is being considered.

Though Trump campaigned on a far-right immigration platform, including a proposal to ban all Muslims from entering the United States, he has been unable to fulfill two of his signature campaign promises: The construction of a border wall on the U.S.-Mexico border and the end of what Trump calls "catch and release," the policy by which some undocumented immigrants are released in the U.S. while their cases move through the courts.

In September, the administration announced a plan to circumvent the Flores agreement, a legally-binding 1997 court order that prohibits the government from detaining immigrant children for more than 20 days. That plan hasn't been implemented yet, though, and will almost certainly be challenged in court if and when it is, lawyers tell the Post.

The Post reports that the administration is considering other immigration proposals in addition to binary choice, although it didn't say what those proposals were.

Trump, Miller, and other officials maintain that the administration's hardline immigration policies are intended to deter crime and drug smuggling. However, study after study has found that immigrants, undocumented and documented alike, commit crimes at far lower rates than native-born Americans.