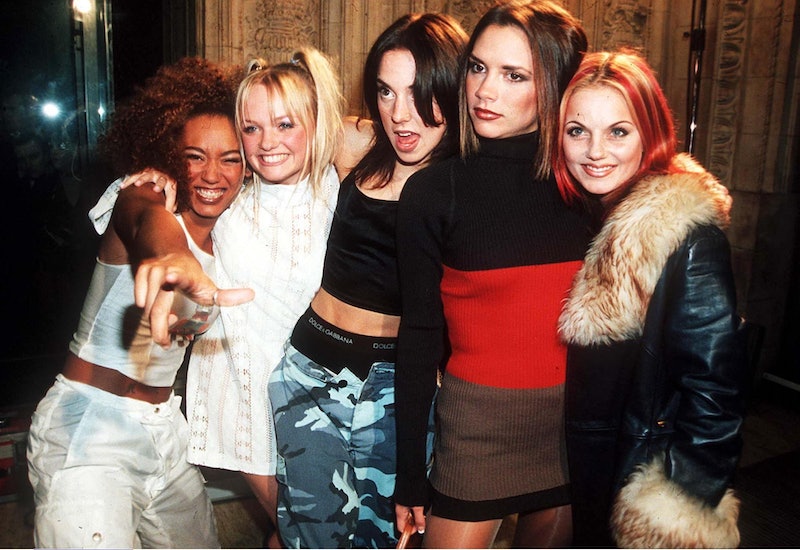 OMG guys, huge news. There is a chance that the OG girl power slinging legends that are the Spice Girls might be getting back in the studio. And it's OK if you just high fived yourself, I know I did. Anyhow, rumours of new tunes have been rumbling since the tour was announced and now one of the gals is stoking the fire. Which gal I hear you ask? Well, it's Baby Spice. Yes, Emma Bunton has hinted that the Spice Girls might do a new album.

Speaking to the Daily Mail, Bunton said, although nothing is set in stone, or even in development, that the group are absolutely open to the idea"

"We definitely haven't started writing, or anything like that, and it would have to be very organic. So, we'll have to see. After the tour maybe, or during the tour I think, especially with us girls. We are so fly by the seat, which we love, and gives us that adrenaline. We're always like: "What's next?" So, that [a new Spice Girls album] could happen. Who knows?"

This news comes hot off the press just as Bunton is releasing some solo music. Looks like all that time in the studio has Baby Spice ready to flex those singing muscles again.

Bunton's latest song, Baby Please Don't Stop, is from her solo album My Happy Place, which is due to be released Apr. 12. During her chat with the Daily Mail, the singer also made it absolutely clear that, despite any fledgling hopes from super fans, Victoria Beckham would definitely not be performing at any of the shows. I know, right? I also am crushed by this news. Bunton told the Daily Mail:

"That's something that's not gonna happen. She's been brilliant in the conversations we've had. So supportive. From day one she's been like: 'I'm here to support you,' so that's just lovely. And, she wants to come with Harper. I'm so excited that she's going to come."

Bunton's album is sure to get a lot of attention in the run up to the hotly anticipated tour. The gals are set to do a huge tour of the UK and Ireland, and despite nothing being confirmed as of yet, they are rumoured to be playing at this year's Glastonbury Music Festival, as Bustle has previously reported.

The tour is set to be an absolute stonker, and Bunton said that the band members are keen to add a lot of their own creativity and concepts to the show. "There's lots going on, and all very exciting creatively," she said. "I've got it in my head what it's going to look like, so we've gotta make that come to life."

The actual rehearsals don't begin until later in the year, but Baby Spice has suggested the talent involved in the production has already blown her socks off. She said: "We don't start rehearsals until April, and I can't wait now. But, you know it's a big show, we're prepping second to second. I've been to auditions with the dancers, so I've seen them. They're incredible."

With what feels like an eternity before the tour kicks off, Bunton's new album should satiate the needs of Spice Girls fans across the globe.

Emma Bunton's new album My Happy Place is out April 11.