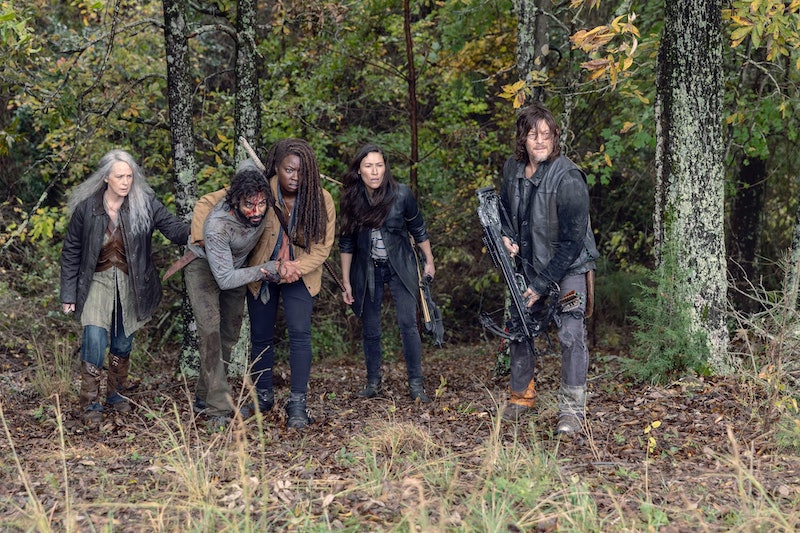 Some people are afraid of a potential zombie apocalypse and build entire shelters around the possibility. But at this rate, humanity should probably be more wary of the rapidly spreading zombies on our TV screens. The Walking Dead universe is getting another show in its now vast repertoire. AMC has green-lighted a third scripted Walking Dead series, as announced by the network on Monday, April 8, making it the latest development in a long string of projects for the Walking Dead universe.

According to a press release obtained by Bustle, the new show will feature “two young female protagonists and focus on the first generation to come-of-age in the apocalypse as we know it. Some will become heroes. Some will become villains. In the end, all of them will be changed forever. Grown-up and cemented in their identities, both good and bad.”

This third Walking Dead series follows the original show, which premiered in 2010 to large fanfare and has recently been renewed for its tenth season, and the first spin-off, Fear the Walking Dead, which launched in 2015. Its fifth season is due to premiere in June. Both shows take place in the years after a zombie apocalypse occurred and follow different groups of survivors traveling in search of a safe home, and it looks like the new show will focus on the younger generation that has been forced to grow up in these scary conditions.

“We’re thrilled that the Dead will keep walking into a new corner of the post-apocalyptic world, a corner that will present stories and characters unlike any that The Walking Dead has dramatized thus far, and that is bound to excite one of the most passionate fanbases in television,” David Madden, president of programming for AMC Networks and AMC Studios, said in the press release announcing the newest series.

The show was created by Walking Dead universe chief content officer Scott M. Gimple and Walking Dead writer-producer Matt Negrete, who will also act as showrunner. “I’m beyond excited to be a part of this new show set in The Walking Dead Universe,” Negrete said, per the press release. “Writing and producing for the original series has been the job of a lifetime and I’m honored to be working with Scott and all the fine Dead folks at AMC in this new capacity.”

Although this will be the third Walking Dead show, it’s not the only upcoming project in the zombie-filled universe that fans are salivating for. AMC is also producing a trilogy of Walking Dead films which will focus on Rick Grimes, the lead character of the original series that started it all. Andrew Lincoln, who left the show in the ninth season, will return for the films, which are still in development.

While there’s no details about casting or a show title as of yet, production will begin on the first ten episodes this summer in Virginia. And, the show is currently set to premiere in 2020, so you still have time to set up your zombie shelters if necessary.