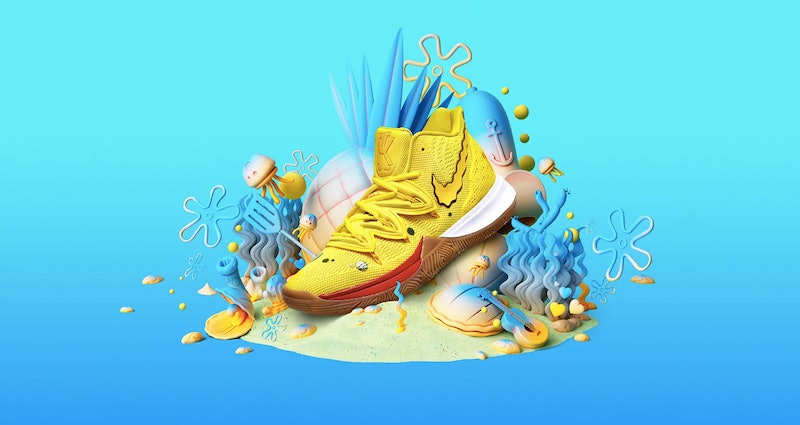 Unless you’re a starfish living under a rock, then you know 2019 is the 20 anniversary of the first SpongeBob Squarepants episode. Brands have already created makeup in honor of the Bikini Bottom native, but now Nike has a Kyrie x SpongeBob collection in the works — and it’s launching real soon. Are you ready, kids?

If you automatically answered with an “Aye, Aye, captain,” then this line is one that you’ll be excited to cop for yourself. Nike has already referenced pop culture with its Stranger Things collection to exemplify characters in a shoe. But the sneaker brand is capturing the true essence of the most notable characters — Sandy, Patrick, Squidward, Mr. Krabs, and SpongeBob himself — in a series of five shoe designs.

According to the Nike site, the collection is done in partnership with Nickelodeon, but is specifically created in the Kyrie Irving “Kyrie 5” Nike shoe since the basketball star himself is a superfan of the classic television show.

The sneakers may all be of the same style from Nike, but each pair has their own unique characteristics. From the acorn on the back heel of the Sandy sneaker to a splattered Plankton on the side of Mr. Krabs shoe, there’s a little piece of the show found all throughout this collection.

SpongeBob fans can get a piece of Bikini Bottom on land, online, and in stores starting Aug. 10 where prices start at $110.

Here’s what to expect in this “F.U.N.” collection.

Just like the sponge himself, the Kyrie 5 SpongeBob Squarepants sneakers feature a porous upper in bright yellow. The base of the shoe uses red, brown, and white accents to signify SB's tie and square pants. These will retail for $130.

SpongeBob's frienemy (unbeknownst to him) Squidward gets his spotlight in these seafoam green kicks of the Kyrie 5 style that are set to also retail for $130. The back of the heel is even more detailed with the plastic bubbles to make this shoe (and show) come to life.

As luck (or great marketing) would have it, the Kyrie 5 Mr. Krabbs sneakers retail for $20 cheaper. And if you know anything about the Krabs, he's all about the moneybag while being cheap. Fans will find the Krusty Krab owner's claws all over this shoe from the splattered Plankton to the interior cash design surrounding the characters face on the inner sole.

Both Sandy and Mr. Krabs' shoes are low tops, but still make an impactful statement in the details. Sandy Cheeks' sneaks are more casual, but built with all the makings of her underwater space suit. The squirrel's hair flower on the uppers are a clear reminder of which land creature runs Bikini Bottom.

The last pair in the SpongeBob collection are a pair dedicated to the sponge's best pink pal Patrick Star. The starfish is fully represented with its bright pink uppers featuring a porous print while the bright green and purple soles reflect the starfish's iconic trunk shorts.

SpongeBob and his pals are unforgettable characters that even the biggest basketball stars relate to. So whether you're sitting at home watching SpongeBob reruns or dribbling on the court, these shoes will serve as a reminder of the world's favorite underwater sponge.