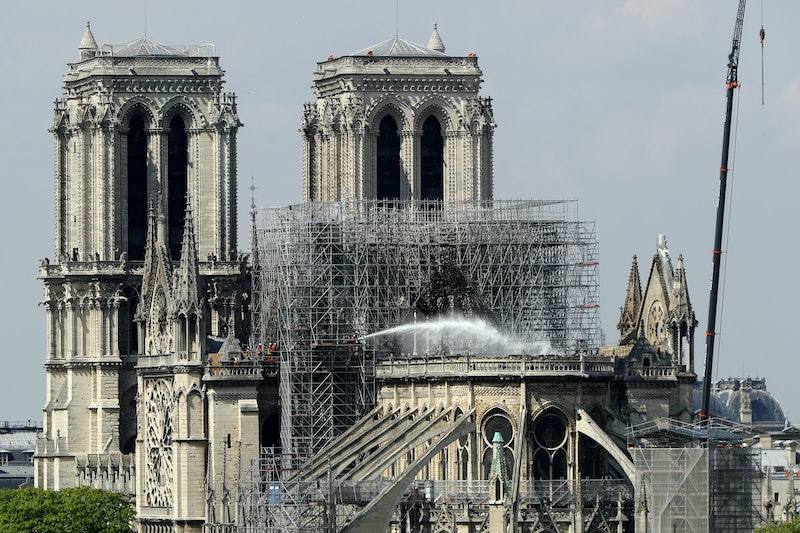 When the rooftop of the Notre Dame cathedral caught on fire earlier this month, photos of the blaze captured the world's attention. Shortly after the fire, which destroyed the cathedral's famous spire, French Prime Minister Edouard Philippe announced that an international architecture competition would be organized for the spire's reconstruction. In anticipation of this competition, one Parisian architecture firm has proposed a Notre Dame greenhouse roof, with the new spire serving as an apiary.

The firm, Studio NAB, considered global concerns such as climate change and social inequalities while coming up with the design. In an email to Bustle, Nicolas Abdelkader — the founder and creative director of Studio NAB — explained that "even after a tragedy, it is possible to build a project sensitive to the human, a universal project in some ways."

The firm didn't initially plan to submit its proposal to the French government, Abdelkader said, but has not ruled out doing so once the competition is launched. In a presentation outlining its vision for the new Notre Dame, Studio NAB described its project as a cathedral "in green for all." In addition to constructing a greenhouse and apiary in the cathedral's roof and spire, Studio NAB envisions a space for professional and educational workshops that are accessible to people regardless of income or social class.

The goal of Studio NAB's proposal is to "spread a positive message after this disaster," Abdelkader said, and to approach the reconstruction of the cathedral in a "relevant and meaningful" way. Studio NAB's vision for Notre Dame's new roof would "respect the original profile of the building" while also adopting more modern, sustainable features, per the firm's presentation.

According to Studio NAB, having an apiary full of bees — those "insatiable workers" that survived the fire — in Notre Dame's spire would be "in homage to the builders of the cathedral." But the bees wouldn't be the only ones working; Studio NAB hopes, if its proposal comes to fruition, that low-income individuals, students, and other people seeking employment would be able to work as beekeepers, gardeners, or workshop facilitators.

The firm's vision for the new Notre Dame roof also entails rebuilding it directly "from the ashes," per its presentation; Studio NAB hopes that the greenhouse's planters and other facilities could be built using the burnt oak framework that remained following the fire. Studio NAB wants to maintain as many of the old elements of the cathedral as possible — such as the rooftop statutes — while simultaneously responding to environmental concerns.

This vision directly responds to the guidelines that Philippe laid out for the international architecture competition. According to French radio network Europe 1, the goal of the competition is to "give Notre Dame a new spire adapted to the techniques and stakes of our time."

Although the fire caused significant damage to Notre Dame's roof, French President Emmanuel Macron announced shortly after the blaze that France would rebuild the cathedral within five years, and that it will be "even more beautiful" than before, per New York Magazine.