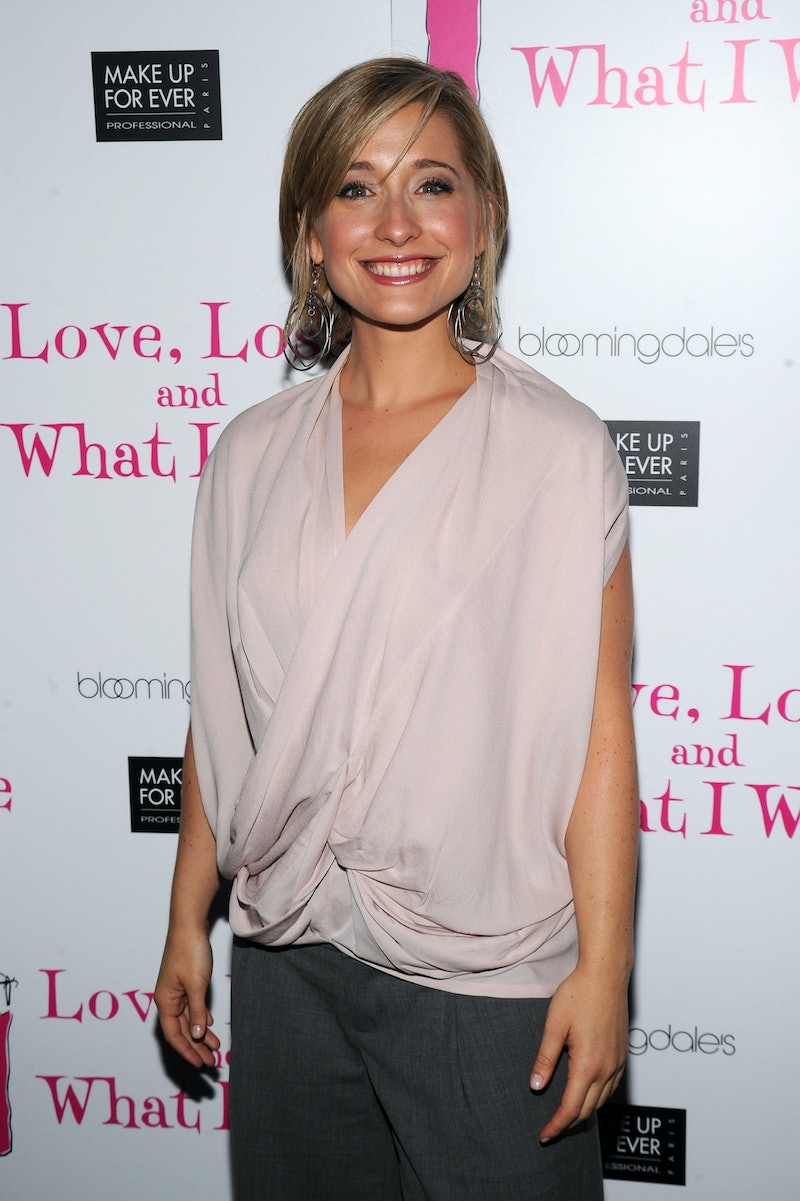 Lifetime just greenlit another movie ripped straight from the headlines. A NXVIM movie is coming to Lifetime with the working title of NXIVM Cult: A Mother's Nightmare. The film has also cast the roles of former Smallville star Allison Mack and Keith Raniere, who were both accused of having ties to NXIVM, an alleged sex cult. (Bustle previously reached out to Mack's rep for comment, but did not receive an immediate response.)

According to a press release from Lifetime, Twilight star Peter Facinelli is portraying Raniere and Sara Fletcher from Secret Girlfriend will play Mack. The made-for-TV movie will follow "the true story of Catherine Oxenberg and her fight to save her daughter India from a dangerous sex cult." Cloak & Dagger's Andrea Roth will play Oxenberg and Devil Whisper's Jasper Polish has taken on the role of India.

Here is the official description of NXIVM Cult:

"When Catherine learns about a leadership seminar from a new organization called NXIVM, she decides to take her twenty-year-old daughter India to the professional development meeting. Led by the extremely enigmatic Keith Raniere, Catherine can’t help but shake the feeling there’s more than meets the eye with the self-help organization. Despite Catherine’s best efforts, India is drawn deeper into the cult, eventually joining a secret sorority of female members who are branded with the cult leader’s initials, ordered to maintain a restricted diet and forced to recruit other women as sex slaves."

The Lifetime film is also said to tell "the story of a mother who will stop at nothing to get her daughter back and exposes the intricate seductive power of Allison and Keith and the mental and physical abuse India fell victim to."

The New York Times first exposed the alleged sex cult in 2017. In April 2018, NBC New York reported that Mack was arrested for allegedly being involved in NXIVM, in which she allegedly recruited reported sex slaves for Raniere, the alleged cult leader. Mack pleaded not guilty at the time of her arrest. In April, Mack pleaded guilty to racketeering conspiracy and racketeering and admitted to state law extortion and forced labor, CNN reported. She faces a maximum of 40 years in prison. Her sentencing is slated for Sept. 11.

On June 19, BuzzFeed reported that Raniere was found guilty on all charges. According to the outlet, the 12-person jury convicted Raniere of sex trafficking, sex trafficking conspiracy, racketeering, and conspiracy to commit forced labor. Raniere faces life in prison with his sentencing set for Sept. 25. According to CNN, Raniere pleaded not guilty to all of the charges and did not testify at his trial. His attorney argued Raniere's relationships with the NXIVM followers were consensual.

As for Lifetime's movie version, the project is slated for a fall premiere and is being produced by Sony Pictures. Alongside Judith Verno of Peace Out Productions, Yfat Reiss Gendell, and Richie Kern, Oxenberg will also serve as executive producer. Lisa Robinson is set to direct the script written by Adam Mazer.

More like this
Here’s Everything Coming To & Leaving Netflix In February
By Jake Viswanath
Who Is Allison Williams Dating After Her Divorce? She’s Engaged With A Child
By Jake Viswanath
At 28, Rosie Perez Risked Her Career To Stop Playing Stereotypes
By Gabrielle Bondi
Adam Ali Hopes 'Waterloo Road' Will “Subvert” Queer Misconceptions
By Sam Ramsden
Get Even More From Bustle — Sign Up For The Newsletter
From hair trends to relationship advice, our daily newsletter has everything you need to sound like a person who’s on TikTok, even if you aren’t.