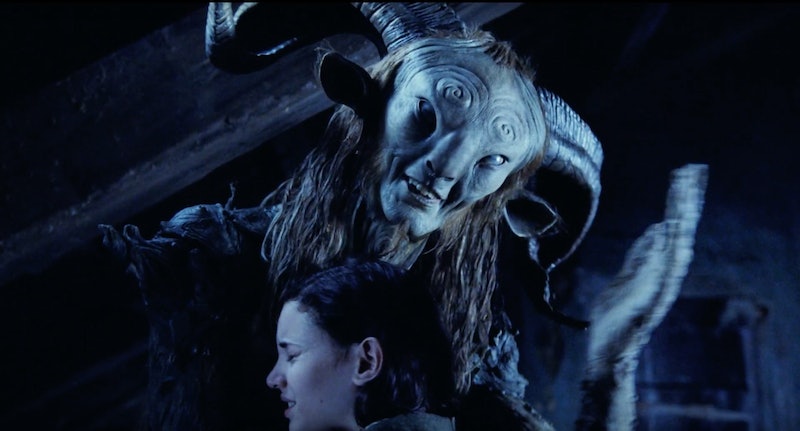 If you were paying attention to film and pop culture at all in 2006, you probably remember Guillermo del Toro's epic film, Pan's Labyrinth. The dark fantasy film opened to widespread critical acclaim, made $83.3 at the box-office and was eventually nominated for six Academy Awards. Now, a generation of fans both new and old can celebrate the tale anew, because HarperCollins Children's Books is publishing a novelization of the film, written by both del Toro and beloved children's fantasy author, Cornelia Funke. Pan's Labyrinth: The Labyrinth of the Faun is due to hit shelves on July 2, 2019.

A little plot summary for those in need: Pan's Labyrinth is set in Spain in the summer of 1944, five years after the Spanish Civil War. A troop of soldiers are sent to a remote forest to flush out the rebels, led by Capitan Vidal, a murdering sadist. With him are his new wife Carmen and her daughter from a previous marriage, 11-year-old Ofelia. As Ofelia witnesses her stepfather's brutality, she is drawn into Pan's Labyrinth, a fantastical world of mythical beings. The magical realist story is centered Ophelia overcoming three trials within the labyrinth, assisted by the many mysterious and magical creatures she meets along the way.

Funke, who is perhaps best known for her bestselling Inkworld trilogy — which includes Inkheart, Inkspell, and Inkdeath — has come together with the filmmaker to transform the material into an epic and dark fantasy novel for readers of all ages titled Pan's Labyrinth: The Labyrinth of the Faun. This haunting tale will no doubt translate beautifully to the page, where the magical world and richly drawn characters —including trickster fauns, murderous soldiers, child-eating monsters, courageous rebels, and a long-lost princess hoping to be reunited with her family — will be brought to life once more.

In a statement released by HarperCollins, Funke says:

"El Laberinto del Fauno (Pan’s Labyrinth) has been my favorite movie since I first watched it. It demonstrates what I believe to be true: that fantasy is the sharpest tool to develop and unveil all the miracles and the terrors of our reality. It is both political and timeless, a rare achievement in storytelling. My life has often given me reason to believe in magic. But when Guillermo del Toro asked me to turn my favorite movie into a novel, even I wondered whether I had entered the realm of fairy tales."

Though the book won't be hitting shelves until 2019, you can obviously check out the original film version of del Toro's story right now. And if you haven't already been a fan since 2006, I have a strong feeling that you'll be desperate to pre-order The Labyrinth of the Faun after just one viewing.