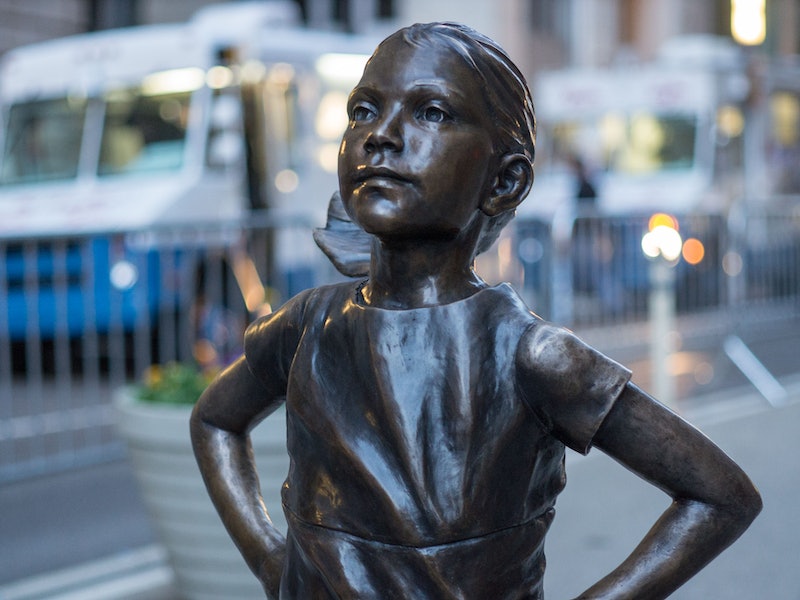 After a gunman opened fire at a Parkland, Florida high school in February, parents of students who were killed in the shooting found numerous ways to protest gun violence. On Friday, one of these parents — Manuel Oliver — placed a bulletproof vest on Wall Street's "Fearless Girl" statue, turning her into "#FearfulGirl."

Oliver's son, Joaquin “Guac” Oliver, was one of 17 people killed at Marjory Stoneman Douglas High School earlier this year. After his son's death, Oliver launched an organization called Change the Ref, which, according to its website, uses urban art and nonviolent creative confrontation to combat the pandemic of mass shootings. On Friday, Change the Ref posted a photo of "#FearfulGirl" on its official Twitter account, alongside a powerful reminder about gun violence's disastrous impact.

“She can’t be fearless if she’s afraid to go back to school,” Change the Ref tweeted.

According to Newsweek, Change the Ref is currently working to promote more restrictive gun control legislation ahead of Tuesday's midterm elections. The "#FearfulGirl" initiative is part of this effort, though The Hill reported that the bulletproof vest was "peacefully removed" from the statue after one hour. In a statement issued to The Hill, Change the Ref explained that the vest's placement on the statue intended to serve as powerful commentary.

“The Fearless Girl is undeniably brave, but bravery isn’t bulletproof,” Change the Ref stated on Friday.

"#FearfulGirl" is not the only art installation Oliver has made in light of the Parkland shooting. Less than a week before sculptor Kristen Visbal's "Fearless Girl" donned a bulletproof vest, Oliver displayed a life-size, 3D-printed statue of his son in Times Square in order to protest 3D-printed guns. Also this week, Oliver designed and unveiled a 90-foot-long billboard in Boston that featured a photo of his son.

“If I had attended high school in Massachusetts instead of Parkland Florida, I would likely be alive today," the billboard stated.

The billboard was a joint effort between Change the Ref and a nonprofit organization called Stop Handgun Violence, according to Boston Magazine. During a Thursday morning press conference, Oliver told reporters that he and other gun control activists were trying to a send a message from Boston "to the people of Florida."

“It’s too late for us to help our son Joaquin, but it’s still early for other parents to save their sons and daughters," Oliver said on Thursday.

Oliver is also not the only artist who has used bulletproof vests to make a statement about school shootings. In August, Newsweek reported that a street artist in Los Angeles hung kid-size bulletproof vests in multiple Target and Macy's stores — just in time for back-to-school season. The artist, who went by the name of Plastic Jesus, included plastic tags indicating that the vests would provide "unparalleled protection for your kids."

The "#FearfulGirl" installation added an additional layer of activism to the "Fearless Girl" statue, which was initially placed in front of Wall Street's “Charging Bull” ahead of International Women's Day last year. Earlier this year, New York City officials announced that "Fearless Girl" would move to new, permanent home in front of the New York Stock Exchange by the end of the year.