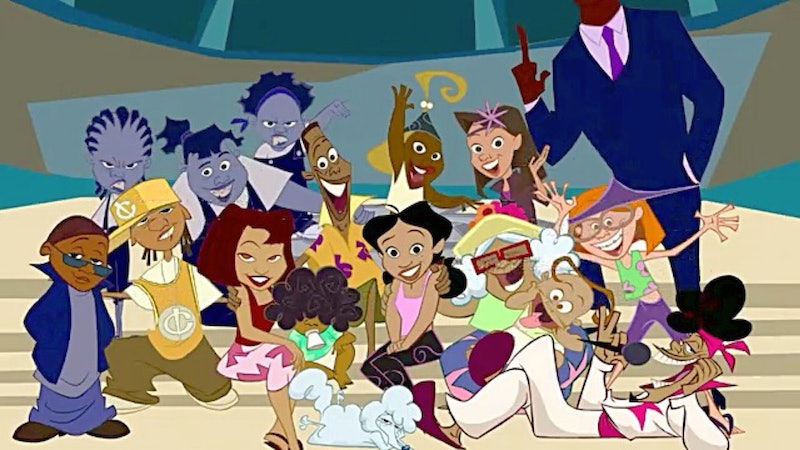 There's nothing better than reconnecting with family — especially if that family is a hilarious, animated staple of early 2000s cartoons. During a recent appearance on Strahan, Sara and Keke, actor Jo Marie Payton announced that a Proud Family reboot is heading to Disney+. The actor, who voiced Suga Mama on the Disney Channel sitcom, told the Good Morning America hosts that fans can expect to see new episodes of The Proud Family in 2020, even though the streaming service has yet to officially announce the revival. (Bustle reached out to Disney+ for comment, and has not heard back.)

"Suga's large and in charge, that's all I've got to say," Payton told host Keke Palmer when asked if there were any similarities between herself and the animated character. "Except for Suga Mama will be doing some new episodes come February," she added. It's unclear whether she meant that The Proud Family reboot will begin production in early 2020 or if episodes will be available then, but Payton did confirm to Palmer that the revival is in collaboration with Disney+.

Payton isn't the only person to tease a Proud Family reboot recently; Tommy Davidson, who voiced family patriarch Oscar Proud told Where Is The Buzz? in August that he was working on a revival. "Oh, I forgot to tell you that, Proud Family is coming back," Davidson said. "It [will be] on one of Disney's streaming [services]," he continued, confirming that it will be "new episodes" of the show.

A month later, Kyla Pratt, who voiced leading lady Penny, seemed to confirm the reboot on Instagram. On Sept. 25, she shared a photo of herself and some of her cast members from before the show's premiere in 2001. "Can’t have a remake without the OG’s," Pratt captioned the pic.

The Proud Family, which ran for four years on the Disney Channel before concluding with a TV movie, centered on the titular Proud family — 14-year-old Penny, her over-the-top father, Oscar, her loving and supportive mother, Trudy (Paula Jai Parker), her tough grandmother, Suga Mama, and her twin siblings, BeBe and CeCe — and their various misadventures. Thus far, it's unclear whether or not the Proud Family revival will pick up where the series left off 18 years ago, or if fans will rejoin the Prouds today, with Penny as a 32-year-old and BeBe and CeCe all grown up.

In addition to The Proud Family, Disney+ is also rebooting Lizzie McGuire, with star Hilary Duff reprising her iconic character, as well as her sassy animated counterpart. In that series, fans will catch up with Lizzie as a thirty-year-old woman, living and working in New York City as an interior designer, and dating a handsome man who owns a SoHo hotspot. Many of the show's original cast members are returning for the Disney+ series, including Adam Lamberg as Lizzie's best friend and potential love interest, Gordo.

The Proud Family reboot has yet to be confirmed, but in the meantime, fans can relive all of the wild family moments by watching The Proud Family Movie on Disney+. The early 2000s may be long over, but thanks to Disney's streaming service, the TV shows everyone loved will live on forever.