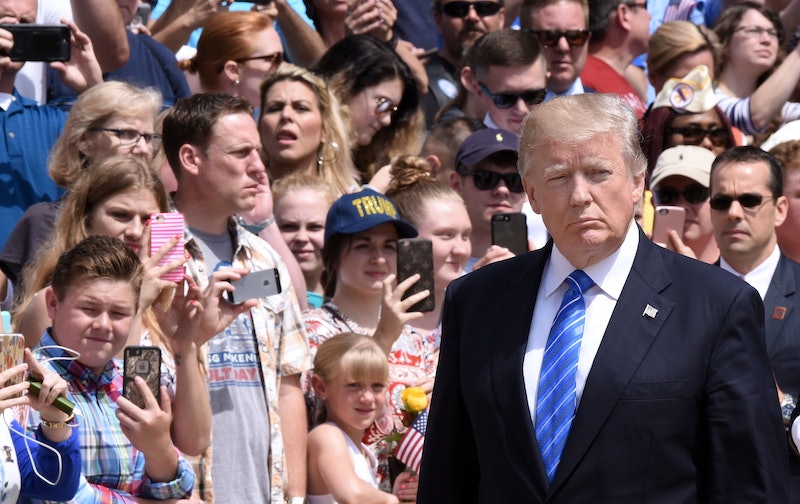 I have so many questions right now. Ever since inauguration day, there's been so much to question, so much to doubt. So many flickers of hope, crushed down, only to flare up again. However, I know that my questions for the commander-in-chief would better be posed to the people supporting him. My burning question for the people still defending Trump — why?

Trump, after all, seems incapable of true human emotion, incapable of thinking of anyone except himself, certainly incapable of taking his constituents and their children and grandchildren into account when making decisions that impact all of us. Not all of his defenders in Congress or on Twitter can possibly be like him, though. So, why?

Instead of working to push through any major legislation, Trump has been almost singularly focused on denying an allegation that none of the intelligence services dispute. He says that Russia had no influence on the election in interviews and on Twitter, over and over. The most trusted American intelligence sources disagree with him. So, why defend him?

He reportedly tried to convince the FBI director to stop the investigation into the issue, a claim that James Comey is willing to publicly testify about. This could mean that he committed the exact crime, obstruction of justice, that two presidents were threatened with impeachment over, though he denies it. But yet, there are still people defending him ... why?

Maybe you're in the camp that believes this is all fake news, not to be believed. OK. Agree to disagree. Let's move on. Why are you defending him after that tax proposal of his, which we already know would save him millions of dollars a year? Why are you defending him when he's proving that he would rather pad his own wallet than yours, or rather than the nation's treasury?

Speaking of his wallet, his representatives are now claiming that it's just too difficult to track foreign government payments coming into the accounts of the various Trump hotels and resorts, so they're not doing it. The Constitution and its emoluments clause barring government officials from receiving payments from foreign governments apply to everyone in the country, including Trump. Why do you defend someone so willing to scoff at the nation's founding document?

His lack of respect for the nation and its safety doesn't stop there. He didn't think twice about giving up classified intelligence information to Russia, and then he defended doing it. You defended him when he claimed that Hillary Clinton should be locked up for her supposed crimes against cybersecurity, but he's giving out his unsecured cellphone number. So why are you defending him now?

What do you get out of defending him for these actions? What political calculus are you performing to get to that answer? What's telling you to stick with this guy? Why do you think he'll help you reach your goals? Why? Why? Why?

Trump's not defending you. So just ask yourself — why are you still defending him? Really think about it — why? Think about a moment in the not so distant future, when you'll look back on this choice. Is it really the right one?

Ask yourself why, and then stop doing it. The longer you do it, the more you'll have to regret.