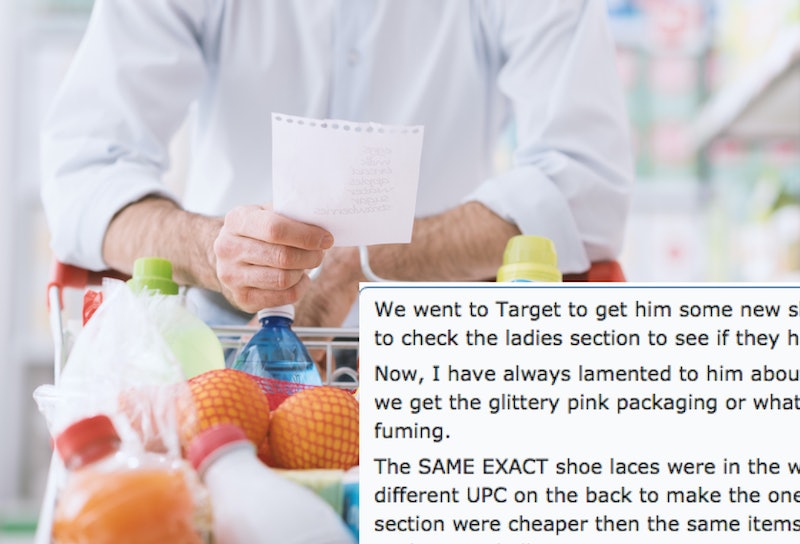 It started when Redditor u/KnitAFett went to the store with her husband to get some new shoelaces for him. It ended with the husband’s reaction to learning about the pink tax — and he’s still mad about it now. And, I mean, heck: Aren't we all? It's been a huge issue for years — and as this story demonstrates, it has now officially reached a level of Absolute Absurdity.

In a recent post in the r/TwoXChromosomes subreddit, u/KnitAFett recounted the story of the fateful shopping trip. They stopped by the men’s section first and did find a couple of pairs; however, the husband then decided he wanted to check the women’s section to see if they had a better variety.

Guess what happened next?

Yep: “The SAME EXACT shoelaces were in the women’s shoe section. For over $1 more,” wrote u/KnitAFett. And we’re not talking just one variety; they checked three, and all of them were more expensive in the women’s section than in the men’s. There was no variation between the actually shoelaces themselves, either — they were identical, “literally the same item numbers on the front of the package and all,” said u/KnitAFett.

They took pictures, by the way. Click the Imgur link in the embedded post below to see them. (But don’t forget to brace yourself for an onslaught of fiercely burning rage first, because something like that is likely to overtake you when you see the photos.)

Yep. The “men’s” laces were $1.59, while the “women’s” were $2.79. That’s a difference of $1.20 — a markup of about 80 percent — just because the laces were filed under different sections in the store. And although u/KnitAFett had “always lamented to him about women being charged more for the exact same products,” the husband “finally got to see just how bad it can be and he’s still fuming.”

Me too, u/KnitAFett’s husband. Me too.

The phenomenon of the “pink tax,” as it’s known — the tendency for products and services aimed towards women and femmes to be marketed at a higher price point than gender neutral products and services or those coded as masculine — has been well documented, particularly in recent years. For example, in 2015, the New York City Department of Consumer Affairs published a study called “From Cradle To Cane: The Cost Of Being A Female Consumer" whiched analyzed more than 800 products from over 90 brands sold at retailers in New York City; according to the results, “women’s” products cost on average seven percent more than “men’s,” with clothing for adults costing eight percent more and personal care products costing 13 percent more. Meanwhile, a 2016 report from the Joint Economic Committee of the United States Congress pointed to a variety of other research that found similar results, including a 2011 study that found “women’s” deodorant costs more per ounce than “men’s,” and that a “women’s” haircut typically costs 54 percent more than a “men’s” haircut.

According to a senate floor analysis of bill AB 1100 in California, the pink tax costs women and femmes $1,351 more per year — a figure which really adds up over a lifetime. And when you combine the pink tax with the wage gap? The picture that emerges is decidedly not OK: Women and femmes are paid less for the same work, but charged more for comparable products — and will spend their entire lives battling this inequality.

That’s outrageous enough in and of itself — but u/KnitAFett’s experience takes it all to a whole new level. The products were literally identical. They weren’t in different packaging; they weren’t different colors; they weren’t for different shoe sizes; they were the exact same product. And yet, one was marked up a whopping 80 percent, simply due to the fact that it was placed in a different section of the store.

(And yes, I know that computer-based price optimization has a lot to do with this particular example — but that still doesn't make it acceptable.)

I won’t lie: I’m a little annoyed that the husband has been hearing u/KnitAFett tell him about the realities of the pink tax for ages, and it’s only when he had direct experience with it himself that he finally realized what a problem it is. This is a common thing in our culture, and it bothers me that we haven't managed to move beyond it yet. But at least he knows there’s a problem now — and he’s mad about it.

So, I say this: Good. Stay mad. Help us get rid of the pink tax once and for all, because it is absolutely not OK. Help fight the tampon tax, too, while you’re at it. And help fight the many, many pay gaps that exist. All these issues, and so many more, are all tied up with each other; wealth inequality is a huge and pervasive problem. It’s going to take all of us even just to shrink the gap, let alone end it — so let’s get to work.

More like this
Here’s How To Make The Spotify Music Festival Lineups Taking Over Instagram
By Alexis Morillo
You Can Save Up To 40% Off On TikTok’s Favorite Products This Black Friday
By Kristine Fellizar and Alexis Morillo
Iran Has Issued A Death Sentence Over Mahsa Amini Protests
By Catharina Cheung, Darshita Goyal and Maxine Harrison
MOBO Awards Found Kanya King On The Woman Whose Grit & Determination Spur Her On
By Kanya King
Get Even More From Bustle — Sign Up For The Newsletter