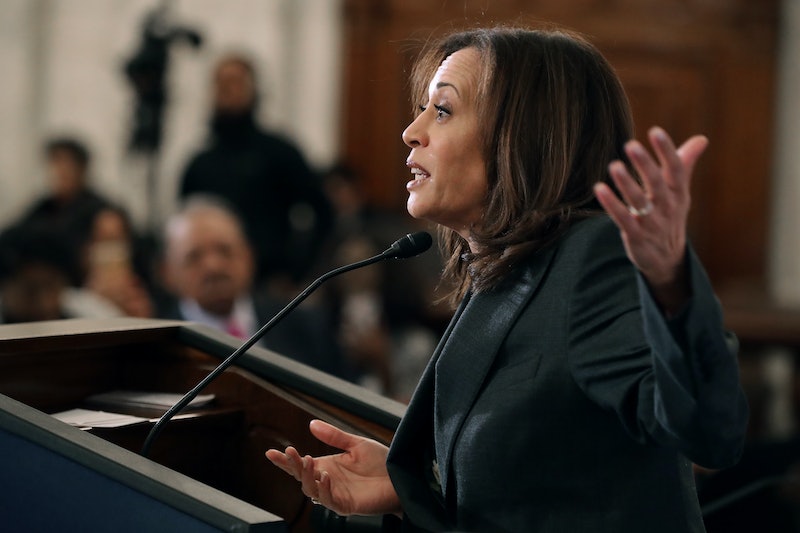 After nearly a century of failed attempts, the Senate has passed an anti-lynching bill that, for the first time in America's history, will make it a federal crime to lynch people. That's right: Lynching isn't currently forbidden under federal law, and it won't be until President Trump signs the legislation that the Senate passed on Wednesday.

The bill was introduced by Sens. Kamala Harris, Cory Booker and Tim Scott and formally co-sponsored by 38 other senators, according to the Hill. It passed on a voice vote. In a statement released jointly with Booker, Harris condemned lynchings as "needless and horrendous acts of violence that were motivated by racism."

"This is a historic piece of legislation that would criminalize lynching, attempts to lynch and conspiracy to lynch for the first time in America's history," Harris said on the Senate floor. "Lynching is part of the dark and despicable aspect of our country's history that followed slavery and many other outrages in our country."

According to research from Tuskagee University, over 4,700 people were lynched in the United States between 1882 and 1968, around three-quarters of them black. Anti-lynching legislation was fist proposed in Congress in 1900, according to the Washington Post, and has been put forth more than 200 time since. but although the House of Representatives passed several iterations of it, the bills have regularly been filibustered in the Senate. In 2005, the Senate passed a resolution apologizing for failing to enact anti-lynching laws — but ironically, that resolution didn't actually enact any anti-lynching laws.

“It’s a travesty that despite repeated attempts to do so, Congress still hasn’t put anti-lynching legislation on the books,” Booker said. “This bill will right historical wrongs by acknowledging our country’s stained past and codifying into law our commitment to abolishing this shameful practice."

Under the Justice for Victims of Lynching Act, if two or more people lynch somebody based on their race, gender, religion, nationality, sexual orientation, gender identity or disability, the perpetrators will be subject to a maximum of 10 years in prison if the victim is injured but doesn't die. If the victim dies, the perpetrators are liable to spend the rest of their lives in prison.

The National Review reported that many Republicans on Capitol Hill were uncomfortable with the inclusion of gender identity in the list of protected categories. Of the 38 senators who co-sponsored the legislation, only eight were Republicans, according to GovTrack.

“This bill will not undo the damage, the terror, and the violence that has been already done, nor will it bring back the lives that have been brutally taken,” Booker said in his statement. “It will not reverse the irrevocable harm that lynching as a tool of oppression and suppression has caused. But it will acknowledge the wrongs in our history. It will honor the memories of those so brutally killed. And it will leave a legacy that future generations can look back on – that on this day, in this time, we did the right thing.”