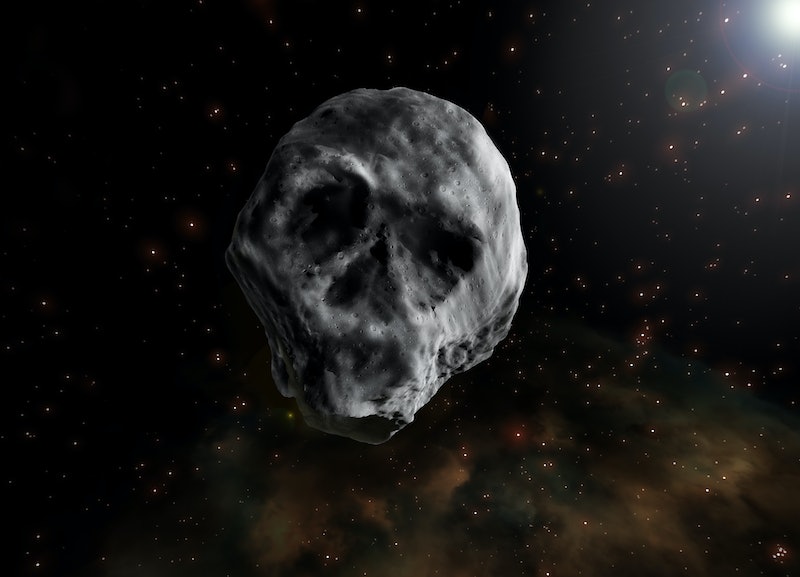 This fall, even space is getting into the spirit of the season: According to Space.com, an asteroid that looks like a skull nicknamed the Halloween Asteroid is set to fly by Earth not too long after the spookiest holiday of the year. And when I say it looks like a skull, I really do mean that; images captured of the asteroid during its last flyby three years ago show a space rock whose shadows lend a distinctly skeleton-like cast to its own surface. The fact that it tends to drift by our planet during an extremely specific time of year just adds to the asteroid’s mystique; I mean, what are the odds that it would both look like a skull and make its flybys around Halloween? It’s just too good a coincidence to pass up — and I am absolutely Here For It.

Officially called Asteroid 2015 TB145, the Halloween Asteroid — which has also been referred to as the Spooky Asteroid, the Skull Asteroid, and, in a reference to one of the most memorable Peanuts cartoons of all time, the Great Pumpkin — was spotted for the first time on Oct. 10, 2015 by the Panoramic Survey Telescope and Rapid Response System (Pan-STARRS) at Hawaii’s Haleakala Observatory, according to Sky and Telescope. Its physical appearance immediately captured the imaginations of the world — and, really, how could it not? I mean, just look at it:

To be fair, that widely-shared image is actually an artist’s rendering, as Space.com points out; however, the site isn’t wrong in noting that the asteroid does “[look] much like a skull from certain angles” all on its own. Here are a few actual radar images of the thing:

And in case you still don’t see it, here’s a close-up view of one of those radar images:

Yep. There it is. Definitely a skull.

But the asteroid didn’t earn its various nicknames solely from its appearance; on top of its skull-like expression, it also distinguished itself by the date of the flyby that occurred soon after its discovery: Oct. 31, 2015. On Halloween itself, the asteroid passed by the Earth at a distance slightly further away than the moon's orbit, according to the Jet Propulsion Laboratory — a safe distance, but one which was still visible to home telescopes set up by amateur stargazers on the planet’s surface, reported Sky and Telescope.

Now, three years later, Asteroid 2015 TB145 is set to pass by the Earth again — and although the flyby won’t occur directly on Halloween this time, it’s still happening within a few weeks of the holiday: Astronomers expect to see the Halloween Asteroid in mid-November of 2018. It won’t be quite as close as last time, either, but it might still be possible to make some valuable observations about it as it passes by. Said researcher Pablo Santos-Sanz of the Institute of Astrophysics of Andalusia (IAA-CSIC) to SINC back at the end of 2017, “Although this approach shall not be so favorable, we will be able to obtain new data which could help improve our knowledge of this mass and other similar masses that come close to our planet.”

The asteroid doesn’t really depict a skull, of course; the fact that the image seems to resemble one is the result of the human mind’s tendency to identify patterns where there aren’t any. Broadly speaking, the phenomenon is called apophenia, or our habit of perceiving connections between things that are actually unrelated (you’ll probably be familiar with the term if you listened to The Black Tapes Podcast); in this particular instance, though, it’s specifically pareidolia, which refers to the tendency to interpret visual or literal noise as significant. When you see an inanimate object and think, “Gee, that looks an awful lot like a face,” that’s pareidolia in action — and so, for that matter, is looking at a photo of an asteroid and seeing the image of a human skull etched in its surface.

It’s still a pretty spooky coincidence, though — and as a lover of fall in general and Halloween in particular, I’m totally willing to roll with it. What’s more, after the 2018 flyby, the Halloween asteroid won’t pass by the Earth again until 2088, at which point there is a good chance I’ll be dead (if I’m not, I’ll have somehow managed to live past 100, which would honestly be something of a miracle). So, let’s enjoy the whole thing while we can, shall we? After all, Halloween comes but once a year — and the Halloween Asteroid comes even more rarely than that.