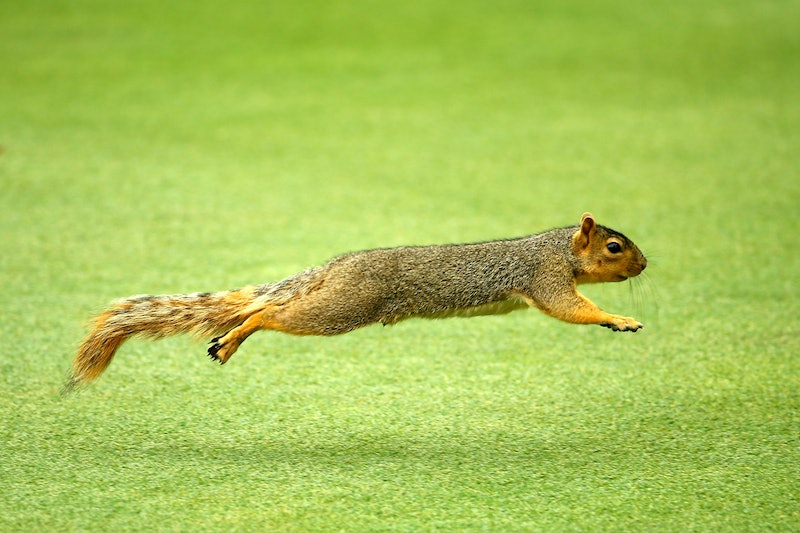 When you came across the above headline referencing a squirrel terrorizing NYC, I'm sure you probably thought it was some kind of click bait or meme reference. But, trust me, it's not: according to a confirmation by the New York City Health Department, the headlines are real. A potentially rabid squirrel has been terrorizing Prospect Park in Brooklyn, and also probably signaling the end of days. It's been real, guys — thanks for the memories.

Maybe we shouldn't freak out yet, though. I mean, you think about apocalyptic New York, you probably think of things like soaring temperatures, oil spills, snakes riding busses, and squirrels getting bloodthirsty... oh wait... check, check, check, check. Literally all those things have happened. It's definitely the end of days, sorry. I really tried to stay optimistic.

So, while we wait for the world to end, I guess we might as well find out more about this apparently bloodthirsty squirrel. According to reports from the New York Times and local NYC station ABC7, if you enter Prospect Park at its Parkside and Ocean Avenue entrance, you'll notice a slew of signs from the health department warning visitors about the "unusually aggressive" squirrel in the area, and urging people/pets who might have come into contact with it to seek medical attention immediately. For, in the last week, that very squirrel is believed to have attacked five different people, including a seven-year-old girl.

Considering the fact that the health department also notes that nationally, there are only 70 annual reports of squirrel bites a year, it's pretty wild that seven percent of those bites are already accounted for thanks to one feisty squirrel's rampage — and that until the squirrel is captured or found dead, the threat of more instances is still in play.

Whether this cranky squirrel is here to let us know that the world is over, or is just an unfortunate victim of rabies, there's a few things we can learn from the past week's freaky true events.

Do Not Feed Squirrels

Most squirrel bites occur when people try to interact with them. Even though they look cute and cuddly, they are not to be touched — they're wild animals! They are more than capable of finding their own food source, so there's no need for you to help feed them. You're actually doing a disservice to the squirrel community by feeding them, as it's dangerous for them to be unafraid and interactive with humans.

Do Not Ignore The Health Department

When you see signs posted anywhere with a NYC Health Department emblem on them, read them. The signs are not there to bore with you dry facts, they're there to warn you of potential dangers — you know, like apocalyptic vampire squirrels that might be on the loose.

Do Not Be Surprised By Anything In New York City

Angry squirrels, snakes on busses, raccoons in the walls, kittens in toilets — all of these things have been reported in New York City. So if you see a headline that sounds insane, look into it before dismissing it. It's probably real. Don't be that person who gets bit by a rabid animal because you didn't think the threat was real. Seriously folks, anything can happen in New York City. And while rabies being in squirrels is rare, it can occur, and rabies is no joke — it can be fatal.

More like this
If You Have Pets, You Probably Don't Realize You're Making These Common Mistakes
By Mackenzie Edwards
David Tennant’s Transformation In ITV’s 'Litvinenko' Is Astonishing
By Sophie McEvoy
Here’s Your Daily Horoscope For November 30, 2022
By Mecca Woods
Here’s How To Find Your Spotify Wrapped
By Emma Lord and Emma Carey
Get Even More From Bustle — Sign Up For The Newsletter