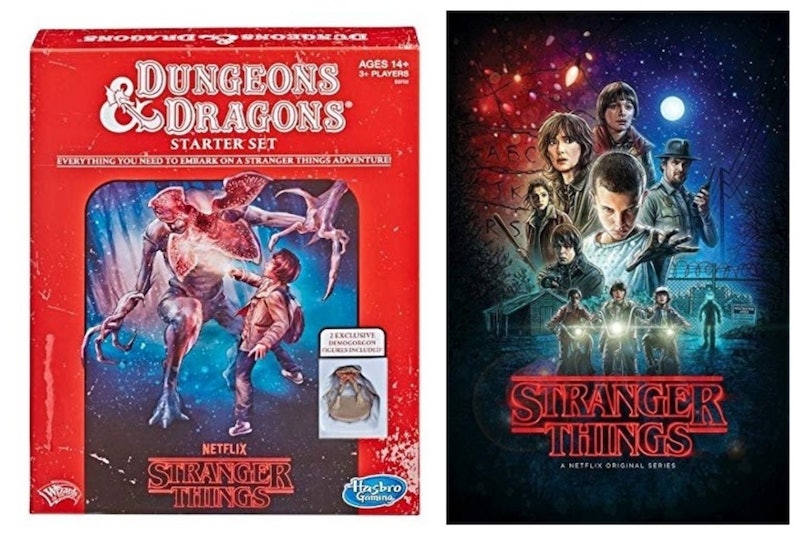 It’s such a perfect idea, I can’t imagine why no one thought of it sooner: Hasbro is releasing a Stranger Things edition of Dungeons and Dragons in the spring of 2019. According to both ComicBook.com and BuzzFeed, Hasbro and current Dungeons and Dragons maker Wizards of the Coast are set to reveal the tie-in version of the iconic tabletop roleplaying game at the 2019 New York Toy Fair, which will occur from Feb. 16 to 19 at the Javits Center. As a former DnD player, current Stranger Things enthusiast, and fan of all things weird and creepy, this whole thing warms the cockles of my dark and shadowy little heart.

Dungeons and Dragons has factored prominently in both seasons of Stranger Things; in fact, it’s such an essential part of our team of adolescent heroes’ lives that they use it as a lens to explain the odd goings-on that constantly plague Hawkins. Originally released in 1974, the tabletop RPG has been a gaming favorite for nearly 50 years, with the most recent update to the three core rulebooks, the Player’s Handbook, Dungeon Master’s Guide, and Monster Manual, having been released in 2014. (You can also access the Basic Rules online these days, too.)

Canonically, the Stranger Things boys use the 1983 Expert edition of the game, which can be identified by its rulebook’s blue cover. By contrast, the DnD Basic set at the time was red. But the red rulebook and the scarlet box the Basic set came in have become more well-known in the decades since than the blue Expert packaging — and accordingly, that’s the appearance Hasbro’s Stranger Things edition of DnD has: It comes packaged in the iconic red box. And, hey, lest it seem inaccurate for a Stranger Things version of DnD to be red when the version the boys play is blue, it’s worth remembering that the Expert version was an expansion — that is, Mike, Will, Dustin, and Lucas would also have had to have to have the Basic set in order to play.

The Stranger Things DnD set, which is scheduled for release on May 1, 2019, includes a rulebook, an adventure book, a set of dice, and character sheets — that is, everything you need to get going, even if this is your first foray into DnD specifically or tabletop RPGs more generally. Additionally, you’ll find some Stranger Things character sheets inside, enabling you to play as your favorite character from the show. And the finishing touch? Two Demogorgon figures, one of which you can paint yourself.

The Stranger Things tie-in isn’t just cosmetic, either. That “adventure book” I mentioned? It actually allows you to play one of Mike’s campaigns — although it’s not totally clear at present which of his campaigns it might be.

The box art and inclusion of the Demogorgon figures suggests that it’s the first campaign we see the boys play in the show: The 10-hour session they originally ran on Nov. 6, 1983, which saw them face off with the on-paper version of the Demogorgon (in contrast to the actual Demogorgon they fought at the end of Season 1). However, according to both ComicBook.com and the game's Amazon pre-order page note that the set has you “[embarking] on an exciting Dungeons & Dragons adventure, Hunt for the Thessalhydra” — that is, the second campaign we see them play on Christmas Eve after Will returns home. If it is the Thessalhydra campaign, then that bring up an interesting thought: Could the release of the Stranger Things DnD set be some sneaky foreshadowing for Season 3?

Prior to the release of Season 2 in October 2017, a fan-favorite theory posited that at least one of that season’s antagonists would be a Thessalhydra — the eight-headed, reptilian creature capable of causing great damage to those who might be foolish enough to attack it Mike had introduced in his final DnD campaign of Season 1. Ultimately, the theory didn’t pan out; instead of a Thessalhydra, we got the Mind Flayer, a giant, 50-foot-tall, spider-like creature with the abilities to control a hive mind army, possess human hosts, and manipulate storms. But it’s worth noting that the Stranger Things DnD set is scheduled for release on May 1, 2019 — just two months prior to Season 3’s premiere date, which will occur on July 4, 2019. I don’t know about you, but if I were planning on bringing a popular fan theory to life on an extremely well-loved television show, and I had his kind of tie-in planned to drop right before that season’s release? I’d definitely use it to prep viewers, however subtly, for what I had in store.

Only time will tell if that’s actually the case yet; again, it’s not even clear whether the Thessalhydra campaign is the one included in this DnD edition, let alone whether the monster itself will appear in the upcoming season. Either way, though, according to BuzzFeed, the Stranger Things Dungeons and Dragons set will be available from Walmart, Target, Amazon, GameStop, and Barnes & Noble starting on May 1; you can place a pre-order at Amazon here. Meanwhile, Stranger Things Season 3 will arrive on Netflix on July 4.

Who’s ready for a trip to the Upside Down?