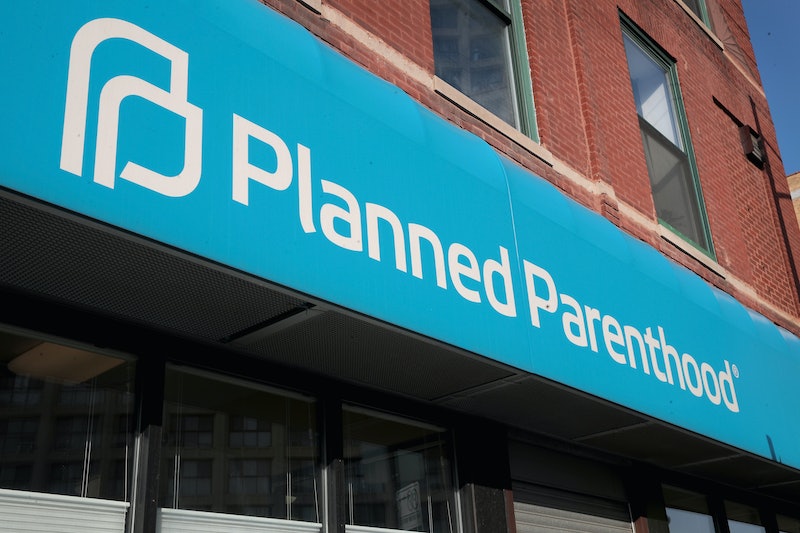 Opponents of reproductive rights have been ramping up their rhetoric against abortion access in the U.S., from the president all the way down to clinic protestors. Similar rhetoric has had violent consequences before, and in February, there was another dangerous incident. A suspect in the Missouri Planned Parenthood fire was arrested, though the suspect's efforts did not succeed in shutting down the clinic, NBC News reports.

A suspect was arrested on Saturday following the attack that happened in the early morning hours of Feb. 10. Surveillance footage shows a man breaking a glass door to the clinic, placing two large buckets inside, and then throwing a Molotov cocktail through the broken door, according to NBC. The buckets were later found to contain gasoline. A fire did not break out immediately, according to Newsweek, so the footage shows the man re-entering the building, and only later did smoke start to emerge from the building.

There were no injuries from the attack, as The Hill reports. The suspect is now facing a charge of one count of maliciously damaging a building that receives federal funding, but the FBI also began investigating the incident as a potential hate crime and was offering a $10,000 reward for information about the fire.

Firefighters at the scene told the Columbia, Missouri police that the fire was “suspicious in nature,” according to the Associated Press. The FBI thus started looking into it as, among other concerns, a potential violation of the Freedom of Access to Clinic Entrances Act, a federal civl rights law that makes it illegal to damage buildings because they house a reproductive health care provider. Even with this initial arrest, the investigation into the clinic attack is far from over, according to NBC News.

"All I can say at this point is that it is an ongoing investigation and we are early in the process," Don Ledford, a U.S. Attorney's office spokesman, told NBC News on Monday. "A complaint is a temporary charge; this case will be presented to a federal grand jury in the near future, which could return an indictment with different or additional charges."

While The Hill wrote at the time that the clinic in question was closed for the week following the attack, it has since re-opened, and Planned Parenthood Great Plains President and CEO Brandon Hill made it clear in a statement that incidents like the February fire would not deter those working to provide reproductive health care to Missouri's women.

“Let this send a clear message: Blocking access to essential health care is against the law, whether it takes the form of violence and vandalism or threats against our patients, our providers, or our supporters,” Hill said in a statement, according to The Daily Beast. "Health care is a human right, and we will not stop fighting for the rights of our patients. Our doors are open in Columbia, and we remain committed to serving this community.”

This dangerous attack is far from the only one of its kind, as New York magazine documented. Attaching abortion to violent rhetoric has consequences — and while this incident thankfully didn't harm anyone, previous attacks have taken people's lives.