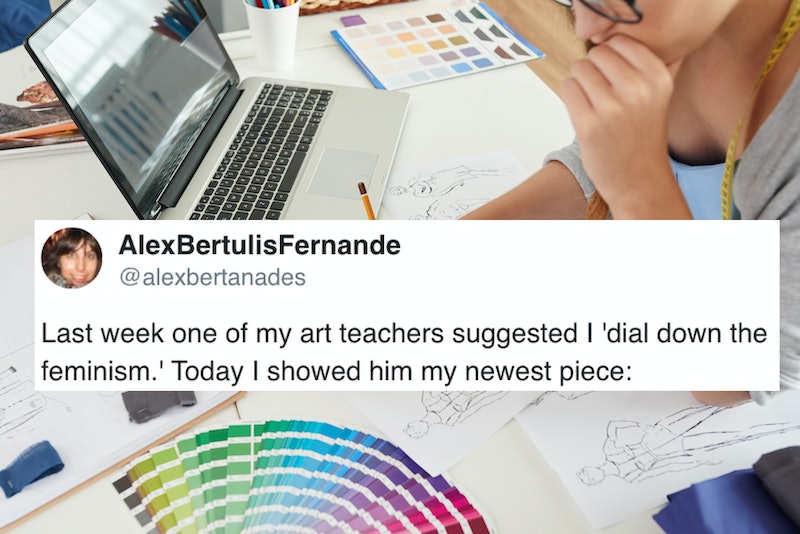 When one of artist Alex Bertulis-Fernandes’ teachers recently told her to “dial down the feminism” in her work, she had one response for him: She dialed it up. I mean that literally, by the way; the next piece she presented to that teacher was an image of a dial turned all the way up to “Raging feminism.” She tweeted the piece on Wednesday — and naturally it went viral. If art is meant to make people feel things, think things, and talk about things, then it’s safe to say that Bertulis-Fernandes’ work accomplishes that in spades.

(Also: Yes, there have been plenty of Spinal Tap jokes to came out of the tweet's viral status, too. The spirit of Nigel Tufnel moves us all.)

A 23-year-old copywriter and creative living in London, Bertulis-Fernandes is currently working on earning a Foundation Diploma in Art and Design, with a specialization in Visual Communication and Moving Image, according to her website. But she’s already got quite an impressive track record, too: She was a Barbican Poet from 2011 to 2012, as well as an editor for Spinebreakers, an online community for teens run by Penguin Books, from 2010 to 2014; she participated in the New Views playwriting program at the National Theatre in 2013, as well as in the National Theatre's Young Studio: Season 6 and the Burn After Reading Poetry Collective in 2014.

And yet, for all her achievements, she still faces the same issues that pretty much all of us who aren’t cis, white, straight men do. Case in point: The incident that inspired her recent piece of art. “Last week one of my art teachers suggested I ‘dial down the feminism,’” she wrote on Twitter on Feb. 7. “Today I showed him my newest piece.” That piece, as an image attached to the tweet showed, was a picture of a silver dial with only two settings: On the left, “Complicit in my own dehumanization,” and on the right, “Raging feminist.” The title of the piece was — what else? — “Dial Down The Feminism.”

The response on Twitter has been overwhelmingly positive. Some simply applauded:

While many others expressed solidarity:

(This comic is by floccinaucinihilipilification, by the way; the original is on Tumblr.)

While others made astute observations about the situation that gave rise to the piece:

Or about how well the metaphor works as a response:

Plenty noted that they'd love to be able to purchase prints of the piece:

(Because supporting artists you dig is rad!)

And some both expressed support for Bertulis-Fernandes and her work and disbelief at some of the... other responses to it:

Because of course, there have also been a number of negative responses, too. And as this tweet notes, it's not unexpected, but it's still kind of discouraging.

Many of these negative responses ask things like, “Isn’t there a setting somewhere in between, ‘Appropriately assertive; respectful to others’?” or present different versions of Bertulis-Fernandes’ image that have options inthe middle of the dial saying things like, “Compassionate human-being who does not need to interject their political ideology into every facet of their life.”

I would argue, though, that these replies (which, by and large, have come from men — surprise!) are missing the point. There is no middle setting (or, as one on-point response put it, "I thought, 'Which way does it twist?' Then I realized: It shouldn't"), and people who deal with the deeply-rooted systems of oppression that are still rife throughout our culture and society are affected by “political ideology” every dang day.

Our culture insists on treating so many people as "lesser," in ways both big and small and on a daily basis. And because of that, our very existence is often a form of resistance. We cannot help but “interject our political ideology into every facet of our lives” when we still have to fight to get paid the same amount for the same work, or to be allowed to turn down a date without risking the situation turning abusive or dangerous, or justify having access to essential health care services, or to do any number of things that those with more privilege than us don’t usually have to worry about.

What’s more, these responses also equate “raging feminism” with being a jerk — but that’s an erroneous assumption to make. You can be a raging feminist without being a jerk ,because you can be angry about something without being a jerk. And besides, we’re allowed to be angry. We do not have to be quiet and pleasant and accommodating simply because it makes life easier for those who are more privileged than we are. Anyone who suffers from the inherent lack of equal rights and treatment that still exists within our society is allowed to be angry about it — and they’re allowed to fight to change the status quo.

By and large, though, the replies are supportive. It’s a testament to how much the message of Bertulis-Fernandes’ piece resonates — and about how much, even though we clearly still have a long way to go, we are willing to fight for our rights. The future literally depends on it.

To see more of Alex Bertulis-Fernandes' work, check out her website.