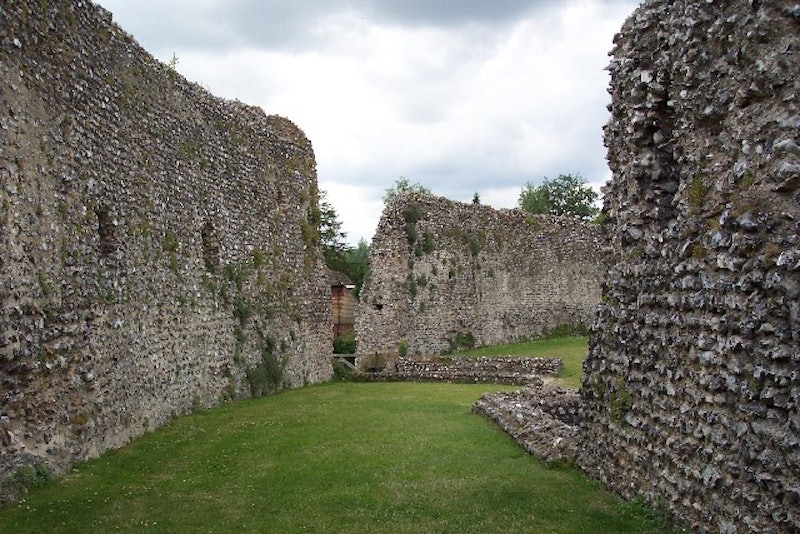 It’s long been thought (by those who believe in the supernatural,at least) that cameras can catch things that the human eye can’t — which some are citing as evidence that an alleged ghost photograph taken at Eynsford Castle, an English Heritage site located in Kent in the UK is authentic. Taken by Jon Wickes, it seems to show a “black monk” lurking where there shouldn’t be anyone at all… although whether or not you believe it’s actually a ghost depends on how you feel about the supernatural in the first place.

According to The Sun, Wickes had taken his 12-year-old son, Harry, to visit Eynsford because Harry was studying medieval castles in school. (Ah, the beauty of living in a place that doesn’t literally tear down all its history just because it’s old!) While the pair were there, they look a lot of photographs — and when he went back to look at them later, Wickes was astonished to see a strange figure in the background of one of them when he was positive there hadn’t been anyone there when he snapped the shot.

“I was quite surprised when I first saw the picture,” Wickes said according to Australian online news outlet News.com.au. “I saw the image with the figure in it and looked on the web. That’s when I read about a monk being seen in the area.” It’s possible that this monk might be William de Eynsford; he was the knight responsible for building the castle in the years following the Norman Conquest, which occurred in 1066. Later in life — around the year 1130— Eynsford became a monk in Canterbury, according to British History Online.

The Daily Mail reports that Wickes posted the image to an online paranormal group to see what they could make of it. Some members of the group apparently thought the figure might have just been a holy in the wall, but others who went to check out the location saw that there was, in fact, no hole in that particular location.

The photo was also examined by paranormal investigator Alan Tigwell, according to the Daily Mail. Said Tigwell, “I went to the site twice last Thursday — in the morning when it first opened and later on. The purpose of my visit was to ascertain whether there was anything within those walls to explain the picture.” His conclusion? “AllI can say is that there wasn’t anything in the castle itself that could explain that picture,” he said according to the Mail.

For what it’s worth, I actually haven’t been able to find any information about a monk allegedly haunting the castle. In fact, there doesn’t seem to be a ton of information available about possibly hauntings occurring at Eynsford at all; the most I’ve found is a mention on the website GreatBritish Ghost Tour that “the castle is reputedly haunted,” with witnesses allegedly reporting “a particular cold spot in the earthworks of the empty moat,” and a possible White Lady sighting claimed by a website called The Paranormal Database to “likely … be responsible for the cold spot located in the moat.”

White Ladies — also sometimes known as Women in White or Weeping Women — are particular kinds of spirits; they’re typically associated with personal tragedies: A lost child, a jilted lover, things like that. However, there don’t seem to be any stories floating around that might explain the presence of a White Lady at Eynsford Castle, either.

Tigwell also couldn’t find anything in the castle’s history to suggest that a monk ever lived there — not even William de Eynsford. (Canterbury, where Eynsford seemingly became a monk, is nearly 50 miles away from Eynsford Castle — not exactly local.) He did say according to the Daily Mail, “In terms of the history of the castle, there was nothing specifically about a monk living there that I could find but I do believe one of the families who own edit had a son who left to become a monk”; I haven’t been able to confirm this, though, so do with it what you will.

Lastly, I was unable to dig up much information about Tigwell himself. He’s mentioned in an article on the Ghost Club website as being the Ghost Club Investigation Coordinator for Kent — the Ghost Club being one of the oldest paranormal investigation and research association in the world; it was founded in 1862, at which time Charles Dickens is believed to have been a member, according to the Paris Review — and someone by that name appears to be a Patreon supporter of a paranormal podcast called Knock Once For Yes, but that’s all I’ve got. (It’s also worth noting that the Knock Once For Yes patron may not be the same Alan Tigwell as the one cited in the Sun, Daily Mail, and News.com.au pieces on the alleged Eynsford ghost photo. It would make sense if he were, but he may not be. Just, y’know, putting that out there.) It’s interesting to me that Tigwell seems to keep such a low profile online.

For his part, Wickes has said that he thinks a near-death experience he had in 1995 may be connected to a number of weird things that have happened to him in the decades since. “I’ve had a few supernatural experiences in the past,” he said according to the Daily Mail. “I had a motorcycle accident in 1995 and died and was brought back to life. When I died, a strange thing happened. I wouldn’t say I’ve experienced a lot of ghostly goings-on, but when I lay there and died, I saw my grandfather telling me to go back to the other side.”

However, he also seems to have a fairly realistic view of near-death experiences in general. He added, “You never know. It might have been because I was on a lot of morphine.”