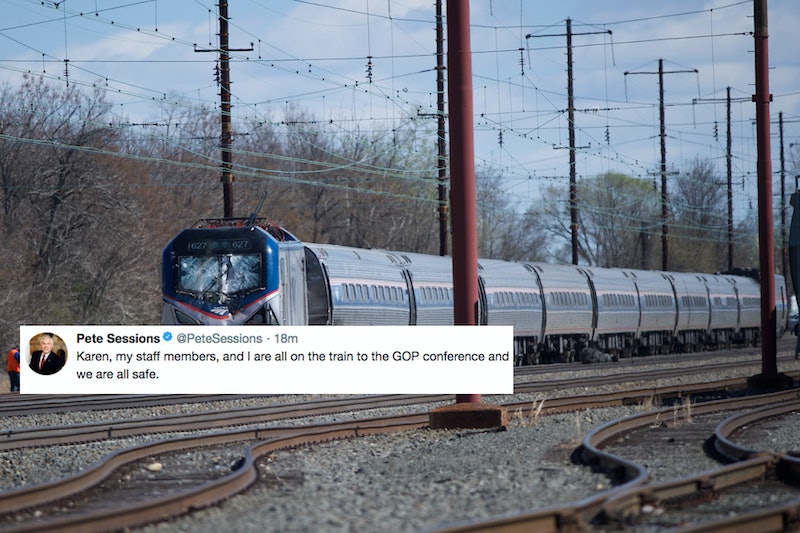 On Wednesday morning, a train transporting GOP congressional representatives hit a truck. The Republicans were en route to their retreat in West Virginia. There are no known injuries to those onboard the train, though there is one confirmed fatality from the truck that was hit. Sen. Jeff Flake and other congressmembers who were on the train told several media outlets that at least one person who was in the truck was killed.

White House Spokeswoman Sarah Huckabee Sanders confirmed the death of a person at the scene and issued the following statement:

The President has been fully briefed on the situation in Virginia and is receiving regular updates. There is one confirmed fatality and one serious injury. There are no serious injuries among members of Congress or their staff.

The GOP representatives were riding an Amtrak train, and a spokesman has since issued a statement that reads:

An Amtrak train came into contact with a vehicle that was on the tracks at 11:20 a.m. in Crozet, VA. There are no reported injuries to passengers or crew members. Local law enforcement is investigating the incident and crews are inspecting the equipment for damage. The train originated in Washington, D.C. Updates will be provided as new information becomes available.

Several Republican lawmakers on board the train have taken to Twitter to issue status reports. Kansas congressman Dr. Roger Marshall tweeted that he and his wife were okay, and he was "helping those that are injured."

Alabama Rep. Bradley Byrne tweeted that the train had had "a collision"; "security and doctors on board are helping secure the scene and treat injuries."

The congressional group was traveling to Greenbrier Resort in West Virginia, where Vice President Mike Pence and President Trump were supposed to join them later on.

Multiple sources tell CNN that injuries for those on board the train are minor.

Speaker Paul Ryan, the top Republican in the House of Representatives, was on board, according to an aide; he was not injured in the crash.

"I think everyone on the train is OK," New York Rep. John Faso told CNN. "I don't know that for sure, it's a long train. But most of the concern is for the people outside."