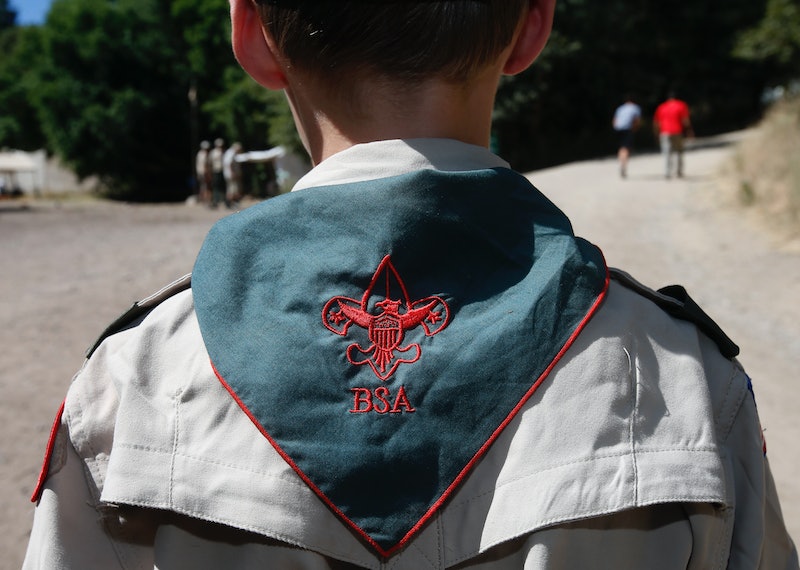 While an event held on the sidelines of this weekend's Conservative Political Action Conference sought to pay tribute to men, not all men were deemed cause for celebration. The "Tribute To Men" event reportedly derided so-called "soy boys," using a popular alt-right slang term for feminist liberal men, in an attempt to celebrate "strong" men.

Although Friday's event was heralded as a "Tribute To Men," organizers and participants had something of a #NotAllMen moment when they began ripping into males they'd dubbed "soy boys." In fact, according to The Daily Beast, "Tribute To Men" participants all agreed that "America is facing a plague of 'soy boys.'"

According to Dictionary.com, the term "soy boy" is an insult that stems from the debunked myth that soy consumption lowers testosterone and is often used by the alt-right to ridicule men they view to be "effeminate liberals." In an EventBrite page promoting the "Tribute To Men" event, organizers said they believe in "the profound truth that strong men equals a strong nation." But as participants pointed out on Friday, these so-called "soy boys" aren't helping.

While speaking at Friday's "Tribute To Men" event, former Pussycat Dolls member and ardent Trump supporter Kaya Jones sought to drive home just how decidedly unsexy such "soy boys" are by declaring, "I don't want to have sex with a soy boy," the Daily Beast reported.

Meanwhile, "Tribute To Men" organizer DeAnna Lorraine, who promotes herself as a "pro-male media personality," condemned The Boy Scouts of America as "the soy scouts" for their recent decision to widen their Boy Scout program to include girls.

The Boy Scouts of America officially welcomed its first group of female scouts into its older youth program, recently renamed from the Boy Scouts to Scouts BSA, in early February. Under the new rule, girls between the ages of 11 and 17 will now be able to strive for the organization's elite Eagle Scout ranking. In early 2018, the scouting organization had welcomed girls between the ages of 7 and 10 into its Cub Scout program.

According to The Daily Beast, Will Witt, a "social media influencer" for the non-profit PragerU, argued it was important to maintain male-only groups like the Boy Scouts, claiming he might have been "a beta male, a soy boy" without them.

In a GoFundMe page seeking donations for her "Tribute To Men" event, Lorraine characterized it as "a huge tribute to men that is so needed in a time where men are being denigrated and vilified every day."

"We are outraged by the Gillette ad and feel we need to counter the current narrative that is so negative to men, masculinity and fathers," she continued, referencing an advertisement put out earlier this year that addressed the subject of toxic masculinity and suggested men could do better by stopping catcalling, bullying, and mansplaining. According to The Daily Beast, "Tribute To Men" organizers had actually planned to hold a symbolic burning of Gillette products at the event to show just how outraged they are at the shaving and personal care product company.

For reasons unknown that symbolic "burning" ultimately did not happen.