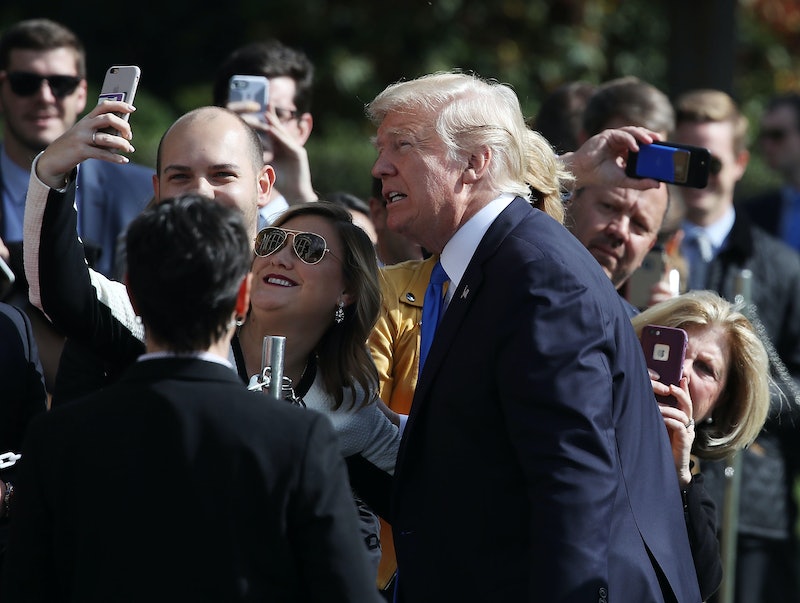 In the coming week, a Trump campaign fundraiser in Los Angeles will include photo-ops, dinner, and the chance to participate in a roundtable event with POTUS, himself. For those people wondering if they'd want to swing by the event, you might want to take a look at the price of admission before you head over. Cost of attendance begins with a $15,000 ticket, per NBC Los Angeles, and the not-so-freebies only grow steeper in price from there.

According to NBC Los Angeles, the event is taking place in honor of Trump's reelection campaign. Per the publication, tickets to the dinner are $15,000, a photo opportunity with the president is $50,000, and the option to participate in a roundtable discussion with the president during the event costs $150,000. The information was obtained by the news network via an invitation acquired by City News Service.

Putting aside the staggering cost of the roundtable discussion, the quick $50,000 drop for a photo with the president is especially remarkable, given the fact that a photo-op with POTUS in February cost $15,000. Per CNN, Trump's reelection campaign kickoff event in El Paso, Texas, offered donors the chance to snag a picture with Trump for that amount. And when you consider the fact that the cost of a photo with Trump in 2016 was $10,000, his new $50,000 shows the sticker price is climbing.

Trump's California event will take place on April 5, according to the Associated Press. Furthermore, it will be held by Trump Victory, a joint fundraising committee backed by Trump's 2020 campaign as well as the Republican National Committee.

For those who are shocked at Trump's ticket prices, it's technically not uncommon for politicians to charge a pretty penny for photo-ops. During Obama's reelection campaign in 2012, his campaign offered a series of fundraising packages to donors in Hollywood, according to The Hollywood Reporter. The most expensive package cost $71,600 per couple, and included two seats at a five-event local speaker series, entry to a private reception with Michelle Obama with a photo opportunity, as well as another dinner with the president at a private residence. On the other hand, a Hillary Clinton event in Los Angeles in 2016 was much more affordable, offering donors cost of entry and a photo-op for a combined $3,700.

Still, Trump's ticketed events seem to go above and beyond standard precedent for politicians charging fees at events. In January, Trump hosted a party in Mar-a-Lago to celebrate the first anniversary of his inauguration, and tickets started at $100,000 per couple, according to CNBC.

It might be surprising to some that Trump's rallies don't cost people any money at all (most political rallies don't). Rather, all people have to do is visit his campaign website and sign up for free tickets there.