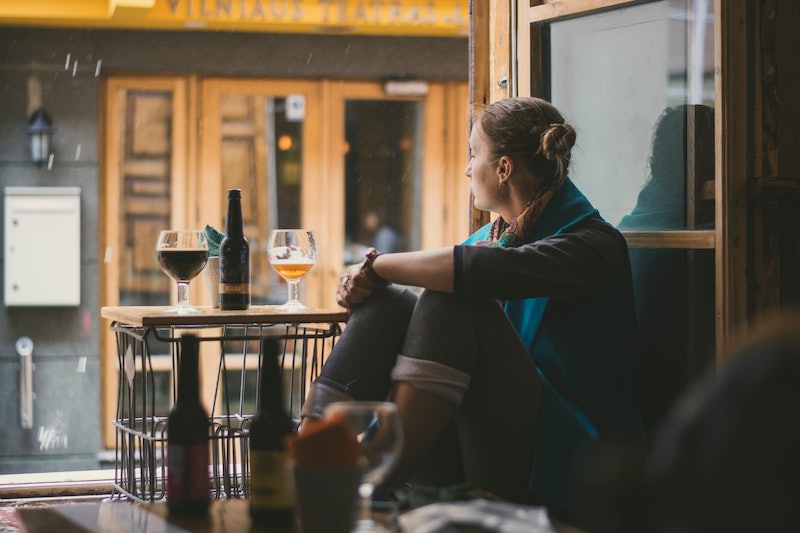 On the next episode of Yikes On Ice, a university's sexist binge-drinking PSA has come under fire for its blatantly victim-blaming message. As important as it is to make students aware of the danger of binge-drinking — a whopping 37.9 percent of college students ages 18-22 self-reported monthly binge-drinking, and the adverse effects on health and campus safety are well-documented — it is another thing entirely when that message is perpetuating extremely harmful ideas about women, drinking, and their role in assault. (York University has since issued an apology for the ads, writing, "We recently received feedback about one of our campaigns. We take this feedback seriously and will suspend this campaign immediately.")

The programming, created by the York region and displayed at York University in Toronto, is eyebrow-raising on several levels. In bold it says "Don't Try To Keep Up With The Guys," which right away establishes a narrative where it's okay for the bros to go out and get hammered, but not for women. In fact, based on that alone, it seems like an anti-binge drinking PSA targeted at only women.

It only gets worse from there — underneath an image of a woman gasping at the raunchy Instagrams she posted the night before, it says, "It's not just about keeping an eye on your drink, but how much you drink." This is cringeworthy on its own, but chilling when paired with the Instagrams, which feature the woman in the ad in seemingly vulnerable positions with men and alcohol. The message here seems to hold the woman in the PSA responsible for whatever harm comes to her, blaming it on her alcohol consumption instead of say, oh, the people who want to do her harm.

It didn't take long for people to start airing their concerns on Twitter — particularly as it related to sexual assault. All too often, women who report their sexual assaults are asked how much they were drinking when the assault occurred, as if to establish blame for "letting" it happen to them rather than blaming the person who committed the assault. Messages like this only reinforce that narrative by shaming women specifically for drinking — a narrative responsible for the 80 percent of sexual assaults on campus that women don't report.

The creators of the campaign have since responded to the criticism, tweeting that they were suspending the campaign immediately: "Our intent is never to offend. Instead, the intent of this campaign was to raise awareness about the dangers associated with excessive alcohol consumption and binge drinking," reads their statement.

While their commitment to making students aware about the dangers of binge-drinking is admirable, it should never, ever come at the expense of women's safety. And there is no time quite as crucial as right now to shut down victim-blaming narratives — according to RAINN, over half of campus sexual assaults take place in the months of August, September, October, or November. With classes starting back up again and a semester's worth of parties, tailgating, and other drinking-related activities on the horizon, we need to reinforce that assault is never the fault of a person being assaulted, and that consuming alcohol safely applies to everyone, regardless of sex, gender, or sexual orientation.