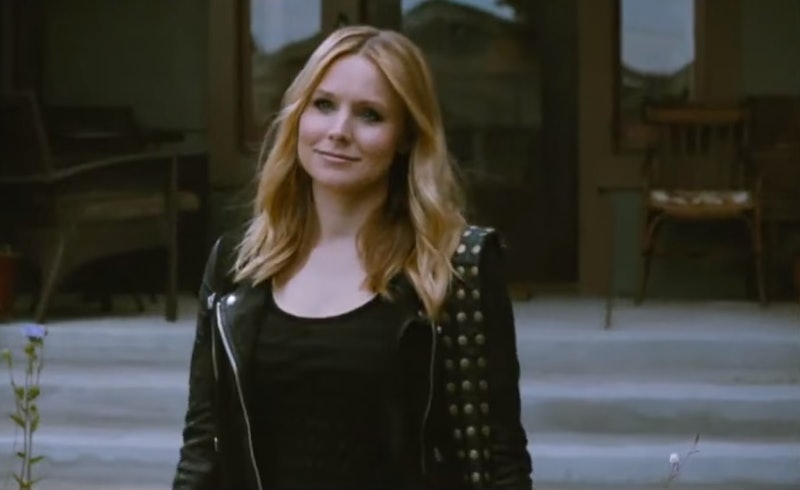 Attention Marshmallows, your favorite private investigator might be heading back to the small screen. According to a report from Entertainment Weekly, a Veronica Mars revival starring Kristen Bell is reportedly in the works at Hulu. Yes, you read that right: Bell is reportedly on board, making this officially the best revival news ever. (And don't worry The Good Place fans, EW confirmed that the actor will be able to do both shows.)

Details are scarce at the moment, but TVLine is reporting that the Veronica Mars revival would be an eight-episode limited series. Given the nature of the original series, it tracks that Veronica would be solving a singular case. What's unclear is what the nature of the case would be. The last time the beloved character made a return it was on the big screen, and fans saw her leave behind a potentially high-power lawyer job in New York City to take over her dad's detective agency in Neptune.

One things fans know for sure is that Neptune is never short on crime. But how many of Veronica's old pals (and enemies) would join her for this potential revival? So far, it seems that Bell and series creator Rob Thomas are the only two confirmed to be attached, but that doesn't mean they're not working on bringing the whole gang back together.

For most of the original cast, it seems like now would be the perfect time for a revival. Jason Dohring, who famously played Veronica's love interest Logan, was most recently seen in The CW favorites iZombie and The Originals. Meanwhile, Veronica's right-hand woman, Mac (Tina Majorino) has been appearing on the recently canceled Scorpion. Percy Daggs III — Wallace — has been making sporadic TV guest appearances, and according to IMDb, Enrico Colantoni, who plays Keith Mars is currently working on a film called Red River.

With many of the original stars in between projects, here's hoping Hulu will be able to iron out deals for them to return to Neptune once more. Thankfully, the cast always has been notoriously close. Not only did they all return for the 2014 movie that was funded by the fans, they also tend to appear in each other's projects. For instance, Bell made an appearance in Ryan Hansen's YouTube series Ryan Hansen Solves Crimes on Television, and a number of Veronica Mars alums have appeared on Thomas' CW series iZombie.

At the moment, it seems that Hulu and Warner Brothers are still working on the details of the deal — which means there's a chance the revival might not happen. However, it sounds like they're far enough along in the process for Marshmallows everywhere to be excited. Because come on, who hasn't been waiting for Veronica to solve one more case? Even if you've had enough of reboots, this is one fans can get behind. After all, Veronica Mars has the kind of premise that lends itself to picking up the story years later.

There's never a bad time for sleuthing, especially when it involves Bell snarking and kicking butt as the timeless noir hero that is Veronica Mars.

More like this
The First Trailer For 'That '90s Show' Includes So Many Nods To The Original Series
By Jack Irvin, Alyssa Lapid and Grace Wehniainen
The 'Ugly Betty' Cast Just Reunited In The Best Way
By Sam Ramsden
How The Thanksgiving Episode Of 'Gossip Girl' Changed Pop Culture History
By Gabrielle Bondi
'Bel-Air' Season 2 Finally Has A Release Date & A New Trailer
By Brad Witter, Kadin Burnett and Sam Ramsden
Get Even More From Bustle — Sign Up For The Newsletter