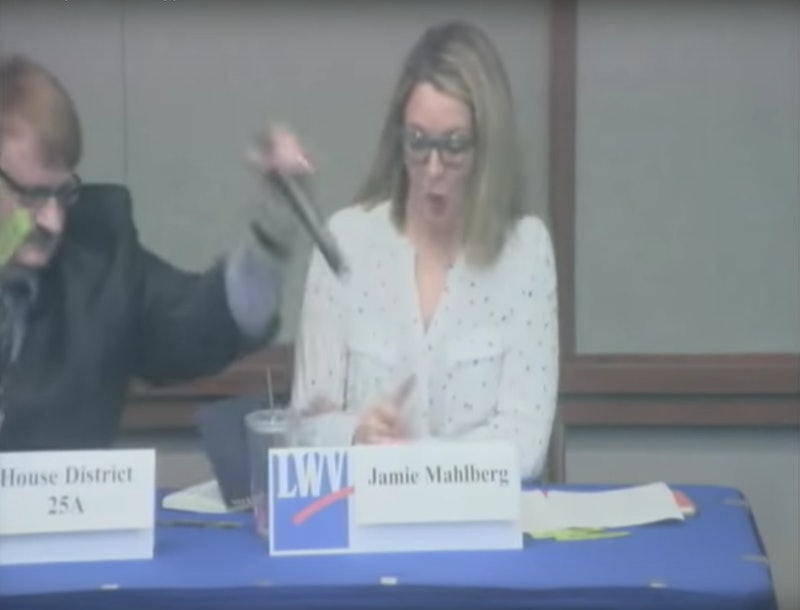 Many analysts are predicting that 2018 will be a "year of the woman" — a year that welcomes a wave of successful female candidates in elections across the nation. It's true that record numbers of women are running in these midterms, and many are doing so because they feel that their voices have been stifled in the political arena. That perception was epitomized by a moment in a political debate on Monday, when GOP lawmaker Duane Quam grabbed the mic from Jamie Mahlberg, his Democratic opponent.

The moment occurred about 39 minutes into a 50-minute long debate. After Mahlberg gave a statement about education funding, Quam reached over and snatched the mic from her hand. She seemed to respond with shock, going, "Oh!" A few minutes later, when she declined to take the mic back from him, he tossed it in front of her.

"It was disappointing to be on the receiving end of such disrespectful behavior from my current representative," Mahlberg told Splinter, "but ultimately I'm focused on my campaign and the hard work I will continue to do to earn the support of the voters of the district." Bustle has reached out to Quam for comment.

Quam has served in the Minnesota legislature since 2010. In 2016, he was challenged by another female Democrat, Linda Walbruch, and beat her by around 20 points, according to The New York Times. The district leans conservative; it includes pieces of both Dodge and Olmsted Counties, the former of which heavily voted for President Donald Trump in 2016 and the latter of which narrowly went for Hillary Clinton, per the Times.

According to The Post-Bulletin, Mahlberg has never run for office before. She told the Minnesota paper that she finally decided to do so after people around her repeatedly made the suggestion. "When you hear something enough times, you think, 'All right, I'm going to check it out,'" she said.

Quam told the Bulletin that he was happy to have the chance to debate issues with an opponent. "Having conversation and discourse is good," he said. "And probably because I have not been shying away from public discourse on issues, it may have energized some people that have a different viewpoint."

Record numbers of female candidates are running for office this year, including around 2,400 women for state legislature seats, according to NPR. The surge has overwhelmingly come on the Democratic side but also affected Republicans.

There are currently about twice as many male state legislators in office in Minnesota as female, according to The Star Tribune. The state's House of Representatives has 134 seats, of which 49 are occupied by women, and the ratio is even more imbalanced in the Senate. Womenwinning, an organization that works to elect pro-choice women in the state, endorsed a whopping 53 female House candidates this year. And that's an incomplete picture of the number of women running, since the group won't endorse anti-abortion candidates from either party.

"We have never seen this level of enthusiasm and commitment before," executive director Lauren Beecham told the Tribune.