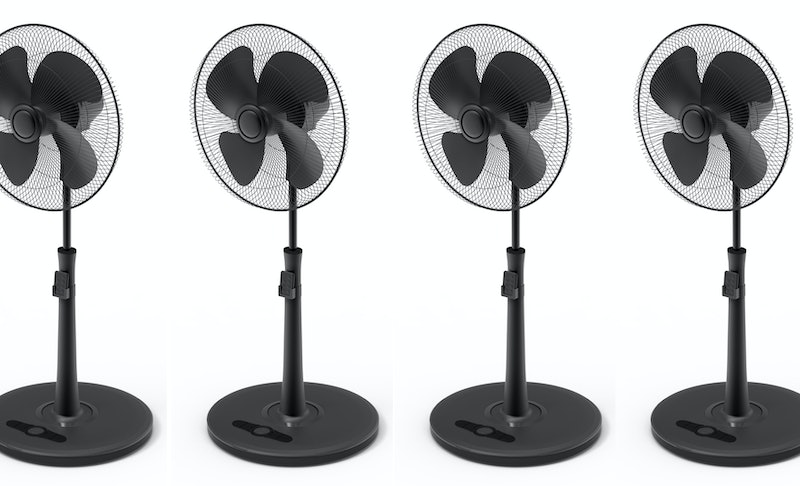 Have you ever made a trip on the London Underground in the hot summer months? If so, you'll know it feels like you're travelling at the speed of light through a tunnel of hell and chaos. The crowds, the sweating, the BO, the general angst — it really is Lana Del Rey style Summertime Sadness for many commuters. In an effort to combat the horror that is the blazing heat, one savvy commuter totally upped the game and has deservedly gone viral. This woman brought a fan on the tube and bow down guys, we have a new queen.

A fan? So what, I always see that. Hand-held fans are a genius idea, but they're nothing groundbreaking.

Well guys, this is not a snappy little hand fan from to Costa Del Sol. Nor is it one of those little battery powered ones. Oh no. This legend brought a large standing fan on wheels with her on her tube journey. Which sounds, like, a bit odd considering there are no plug sockets on the tube (as any person with a rapidly depleting phone battery will tell you), but guys, she didn't need a plug because she is, in fact, potentially a physicist genius. This commuter clocked the fact that all you need is that brief moment of air running through the carriages to get the fan blades spinning.

I mean, is this woman on holiday from her day job at NASA or what?

The fellow commuter who clocked the woman's ingenious method spoke to The Metro about the experience:

"It was in Newbury Park. She was waiting for a train with the fan. I was like, 'how's the fan going to work inside the train?.' But the window was open and the wind was making the fan work."

Newbury Park is a stop on the Central Line. You know, the red one on the map. Which seems appropriate as it is literally red hot on that particular line. Which I can truly tell you is hell on earth having used it for several summers when I lived in London.

The Central line is infamously the hottest of the hot, and last year it really got crazy. According to reports, a temperature of 40 degrees was recorded on the line. Which is just too flipping much, I'm sorry.

As one of the older lines, the red one is yet to have an up-to-date ventilation and air conditioning system. A spokesperson for TFL spoke to The Metro about why it's just so blooming stuffy down there, and said:

"On older parts of the Tube network which have fewer ventilation shafts, we have introduced a range of station cooling systems including industrial-sized fans and chiller units to pump in cold air."

Commuters are often reminded by TFL to carry a bottle of water with them in order to help them stay cool. Which might sound like a really small thing to do and makes very little difference when you find yourself trapped in a tunnel. This commuter seems to have absolutely nailed it and I can't promise I won't be following suit.