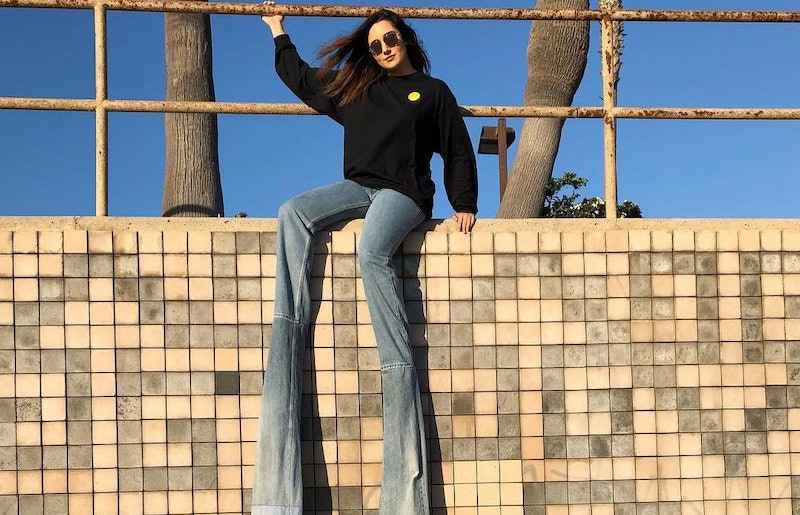 When it comes to fashion and beauty experiments on the internet, Safiya Nygaard may just be the reigning queen. Not only did she start the whole mixing foundation trend (aka Frankendation), but she's one of YouTube's biggest channels with 5.8 million subscribers. Now, Safiya Nygaard's nine-foot jeans are reminding everyone that when it comes to quirky experiments and must-see content, no one does it quite like Nygaard.

One glance at the YouTube star's videos, and you'll notice right away that there's not much she's afraid to try. That's what makes her content so great. After all, not everyone is going to have the guts to walk around in public wearing plastic pants. Now, she's switching it up and walking around (or at least trying to) in nine-foot denim, but where did it come from? Why was it created, and most importantly, who was it made for? The Jolly Green Giant, perhaps? Slender Man?

According to Nygaard's video, the jeans were created by company Bronze 56k and are called the Extendo Jean. If you thought the idea of creating denim this long was kind of ludicrous in itself, just wait until you hear the price. These nine-foot-long jeans retail for $500. Yes, you read that correctly. To be fair, though, you're kind of getting three pair of jeans in one, right?

While the price alone is mind boggling, it's seeing Nygaard both unroll the jeans once she receives them and try to put them on and wear them that will make you ask "Wtf even is this?"

Once the YouTuber does get the jeans on (they only come in one size by the way), they're so long that she can't really even walk through a room with them on. It's totally laughable just how impractical they truly are, but that's probably the point of Nygaard's video. As for why the brand created such impractical pants, she's got a few ideas.

In the video, Nygaard posits that tons of brands have debuted items simply for the shock value. Much like plastic pants and triple waistband jeans, wild fashions get attention, and clearly, it's been working for the nine-foot-long pants. Nygaard's subscribers and Twitter followers quickly began responding to the denim online.

Honestly, it's hard not to joke about the difficulty of walking in jeans that are taller than you are.

For some, though, the nine-foot jeans were all too real.

Perhaps one of the greatest parts of the video, though, was when Nygaard wore both the jeans and a similar denim jacket she'd tried in an earlier video. Honestly, it's kind of the stuff of nightmares.

If, however, you're not completely horrified by the Bronze 56k jeans and instead, can't get enough of the weirdest shit on the internet, Nygaard's channel is about to be your most watched on YouTube. From platform Crocs to 8-foot-tall scarves, if it's out there and weird AF, she probably either will try it or already has. Honestly, though, someone's got to do it. Thankfully, that's Nygaard.