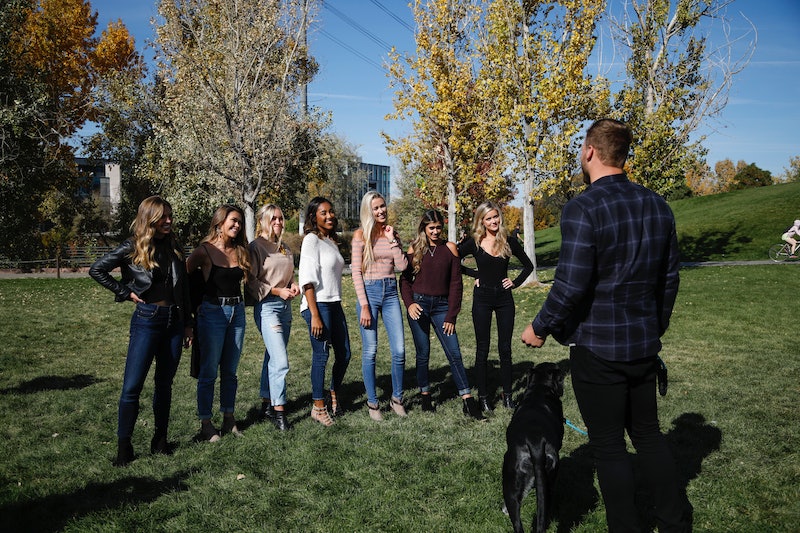 One of the great things about the Bachelor franchise is that, even though there can only be one winner per season (or in Colton's case, maybe not even that), there's still a good chance you'll be seeing some of your favorite contestants pop up at some point down the line, whether it be as the next Bachelor or Bachelorette or as a member of the Bachelor in Paradise cast. Usually, the next Bachelorette is picked from the final women on the Bachelor. However, the latest Bachelorette tease excludes Tayshia Adams as a possible option, even though she made it all the way to the Final Three. Given how down-to-earth and genuinely likable she was throughout the whole process, many fans can't help but wonder why Tayshia seems to be out of the running for Bachelorette already.

The tease came on Tuesday, March 12, in the form of an Instagram post on the official Bachelorette account, and includes images of three of Colton's former contestants: Hannah Godwin, Hannah Brown, and Caelynn Miller Keyes. The caption reads: "1 will be your next Bachelorette, and the other 2 you’ll see in Paradise! Guess who," while tagging all three women.

Many fans will agree, it'd be great to see any one of these ladies continue on in the franchise in some way — but what about Tayshia? It seems odd that she isn't included in this roundup, especially after seeing how gracefully she handled her break up with Colton and the strength she exuded on Part 1 of the live finale Monday, March 11. It's impossible not to want to see her as the next Bachelorette after all of that, so why isn't her picture shown along with these other contestants?

What makes this all the more eyebrow-raising is the fact that Tayshia was the only non-white contestant to make it so far in the competition for Colton's heart. The Bachelor has had a diversity problem for quite some time now. Both The Bachelor and The Bachelorette have consistently been made up mostly white contestants every season and it wasn't until Rachael Lindsay came on the scene that the Bachelorette crown was given to a person of color. (As a point of reference, the show had already been on for 12 seasons.) So while all of the women in this above photo are beautiful, intelligent, viable options, they are also all overwhelmingly white, which has become a prominent pattern on this show.

Several fans couldn't help but notice Tayshia's exclusion in the photo and took to the comments section to vouch for her and note how she deserves to be a candidate for the next Bachelorette. "It should have been Tayshia!" Instagram user terrameraz wrote. "I liked Tayshia @tayshiaaa should be it. She was so classy and smart," another fan, kpvkp, remarked, while kimbann couldn't help but be disappointed, writing, "Why not Tayshia? Ughhhh." Similar sentiments are echoed all throughout the post, proving just how much Tayshia was beloved by so many.

So while The Bachelor has made some strides in diversifying the franchise, this latest Bachelorette tease just goes to show that the series as a whole still has a long ways to go.