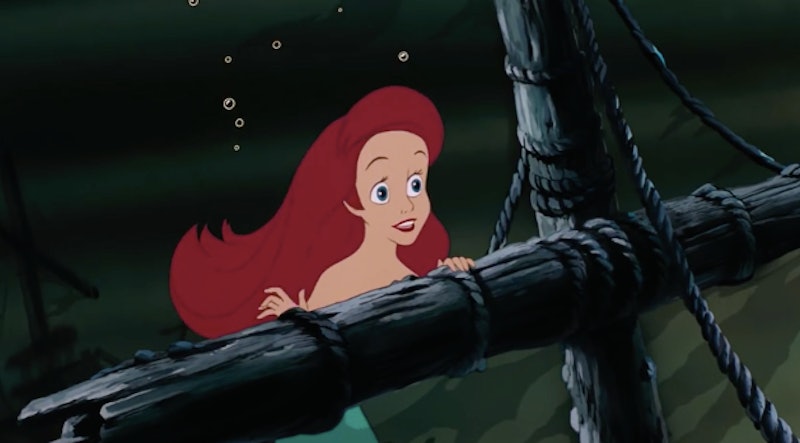 If you spent many summer days flipping your hair in the pool à la Princess Ariel, prepare to be thrilled. ABC is producing The Little Mermaid as a live action musical, and they're re-doing the Disney classic in a totally new way. According to Hollywood Reporter, The Wonderful World of Disney: Little Mermaid Live is going to be using "cutting edge technology" to retell the fish out of water story. This isn't your garden variety TV musical, kids. This will be animation and live music blended together.

Now, before you start worrying, rest assured that the timeless Alan Menken and Howard Ashman tunes aren't going anywhere. Standards like "Under The Sea" and the side-eye-worthy "Kiss The Girl" are reportedly going to come to life with celebrity performances. But here is the twist: It's reported that these performances will be "woven seamlessly throughout the original animated film."

Say what now? This isn't going to be the live-action Little Mermaid musical you'd die to see on Broadway? Another repurposed or reimagined Sound of Music, Grease, Peter Pan, or Hairspray? Nope. In fact, if nothing else, this approach seems more akin to Rocky Horror Picture Show... the in-theater performances, not the Fox remake with Laverne Cox.

I'm going to be honest with you, fam. As interesting as it sounds, I'm not entirely sure how I feel about the execution. Transitioning musicals for a live television audience is a hard enough task as it is. There are a multitude of ways networks can mess that up, and Twitter users will be the first to jump on anything wonky; people watch these for the snark value. So, attempting to ~seamlessly weave~ an animated film and live performances is... ambitious, to say the least. There is a lot of room for vocal flubs and technical difficulties.

I'm also not 110 percent sure what that whole "woven seamlessly" thing is supposed to mean. Are we going to have Selena Gomez and Zac Efron dubbed over the original soundtrack? Or famous faces super-imposed over King Triton and Ursula? Will someone show up dressed up like a gigantic lobster? These are the things I need to know. These are the things that will keep me up at night.

There's plenty of time for ABC to figure this out: Little Mermaid Live is slated to debut Oct. 3. And I am, in spite of my reservations, excited to find out (and see! and hear!) what direction the musical is going to take us. From under the sea to our TV screens, I'm sure it'll be a hell of an adventure.