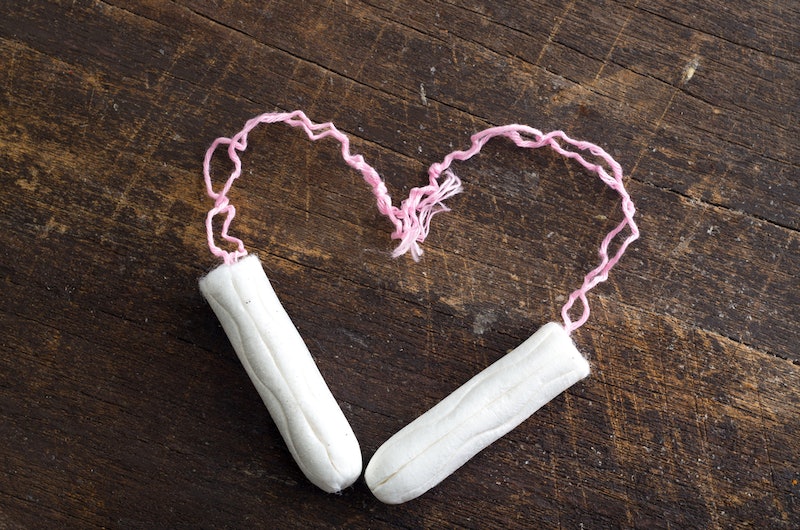 I'm currently three weeks postpartum after giving birth to my second child, and believe it or not, I'm already wondering when I'll get my period again. My post-pregnancy contemplations are, honestly, reminiscent of my post-abortion musings, and these days I'm reminded of the day after my procedure when my 23-year-old, crampy self silently wondered when I would get my period after having an abortion. Whether you're at the tail end of a full-term pregnancy or a terminated one, it's normal to ask yourself (or literally anyone who will listen) when things will essentially go "back to normal."

Of course, every person is different, so if you're wondering when you should expect to experience your first post-abortion period you should consult a health care provider who is familiar with your specific medical history. But there is a typical timeframe most abortion patients can count on. "We usually expect people who have regular cycles to have their first true period about a month to two months after the abortion," Colleen Denny, M.D., a clinical assistant professor in the Department of Obstetrics and Gynecology at NYU Langone Health, tells Bustle. "There’s a lot of variation between individual people — some people might have it as soon as three weeks later, some people might not have it until two and a half, three months — but the majority of people who have a first or second trimester abortion of any kind will have a period about one to two months later."

According to Denny, it's typical for abortion patients who have an in-clinic surgical abortion — a vacuum aspiration, administered in a clinic by a licensed physician who numbs and dilates your cervix, then uses suction to empty the contents, or a dilation and curettage (D&C), in which the cervix is dilated and an instrument is used to scrape the uterine lining — to experience "light bleeding or spotting" one or two weeks after the abortion itself. This bleeding isn't to be confused with a period, but is simply residual bleeding from the procedure itself. Patients who have medical abortions — abortions induced by two forms of medication that end the pregnancy and trigger what is essentially a miscarriage — and pass their pregnancies at home or at a location outside a clinic, should expect to start their period in the same timeframe and after they've experienced a pause in bleeding that signifies the end of the body passing the pregnancy tissue.

"Typically when I do a procedure, the procedure is over by the time the patient leaves the clinic versus a medication abortion, which tends to happen the next day [and outside of the clinic]," Maya Bass, M.D., a family medicine physician in Pennsylvania and Fellow with Physicians for Reproductive Health, tells Bustle. "So sometimes [with a medication abortion] there’s a little more bleeding and for a longer period of time, because your body is doing the work versus a provider in the office."

What will impact your post-abortion period, however, is birth control, and since abortion is safer than a colonoscopy and doesn't impact a patient's future fertility, Bass encourages all abortion patients who don't want to experience another pregnancy to consider a method of birth control as soon as their procedure is over. "I strongly encourage patients to take family planning decisions into consideration the second they get the procedure done," she says. "If the patient had a surgical abortion, they can start birth control right away. If they had a medication abortion, we typically have them start contraception at the follow-up visit when we confirm that they no longer have the undesired pregnancy."

Denny agrees and says that if a patient has an IUD or other form of hormonal birth control introduced the same day as their abortion, their cycle could change. "People who have a hormonal IUD might not even have periods regularly," she says, "so that would make sense — to expect the same post-abortion. The same with the depo shot or the implant: those tend to make people’s periods much higher and more infrequent. So [lighter periods post-abortion] would be something that isn’t due to the abortion, but just due to the new birth control."

If you don't typically experience regular periods due to a medical condition like Polycystic ovary syndrome (PCOS) or endometriosis, chances are your post-abortion period will be irregular, too. "PCOS patients tend to have very irregular and unpredictable cycles," Denny says. "The abortion wouldn’t make that worse or better, but the expectation of a period one to two months later might not be as reliable since PCOS patients don’t have regular ovulatory cycles to begin with, and the abortion won’t really change that too much." And if you have endometriosis, an abortion won't do anything to "cure" it or lesson your symptoms. "Usually we don’t associate endometriosis with irregular cycles, either after abortion or just generally," Denny says. "Endometriosis patients often have very painful periods, and an abortion probably won’t change that for endometriosis patients."

Holly Bland, a We Testify storyteller from Cleveland, Ohio, had an abortion when she was 19 after she confused her pregnancy symptoms with her PCOS symptoms. "The symptoms of a pregnancy very much mimicked what I was used to experiencing for PCOS," Bland tells Bustle. "When I found out I was pregnant, I originally thought I was just having really bad cysts at the time. I was really cramping, I didn’t feel good, and I kind of had a lot of gastrointestinal symptoms to go with that, like pain and diarrhea. I took a pregnancy test just basically for shits and giggles. Turns out what I was experiencing was a pregnancy."

Bland had a surgical abortion at seven weeks gestation. Her post-abortion period was the first "normal" period she had experienced in her life, Bland says, and actually came regularly for a few months after her procedure. "I had my abortion at the beginning of January and my first period was on Valentine’s Day, almost exactly a month after," she tells Bustle. "For the next three months I had a pretty normal period, which was bazaar." But as predicted, Bland's period did go back to only happening every few months. However, she says she has since found a hormonal birth control method that helps manage her painful cramps and other PCOS symptoms.

Managing your post-abortion period will look similar to any other period management, Bass says. "With any bleeding and cramping that anyone gets with their period, I recommend heating pads, good hydration, good sleep patterns, and you can use things like ibuprofen, Motrin, or one of those medications as long as it’s safe with any other chronic conditions that you have." Bass says it's fine to use tampons when your period comes if you want to.

While what's considered "typical" for a post-abortion period can vary from person to person, what isn't typical is heavy bleeding or missing a period entirely. According to Denny, heavy bleeding is going through a pad an hour for two or three hours in a row. If that's happening, see your provider as soon as possible. "It wouldn’t be the period really but a complication of the procedure," Denny says, and reason to call a physician immediately. If someone who has a regular cycle before their abortion doesn’t have a period by two and a half or three months after their termination, they should first take a pregnancy test to make sure they're not pregnant and, if it's negative, they should schedule a regular appointment with their OB-GYN.

Whether your pregnancy was planned or not, short or carried to full-term, becoming pregnant means experiencing physical changes that are beyond your control. Having your period after those changes cease can, for many people, feel like a welcome return to normalcy. And, since abortion is a safe medical procedure, you should expect that "normal" to return sooner rather than later.