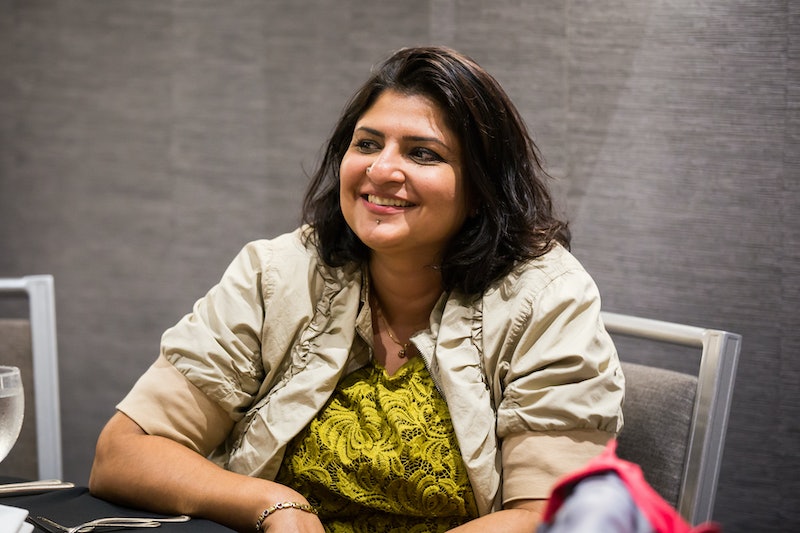 Courtesy of Les Talusan/Advocates for Youth
By Urooj Arshad
Feb. 14, 2019

In this op-ed, Urooj Arshad, co-founder of the Muslim Alliance for Sexual and Gender Diversity and director of International LGBTQ Youth Health and Rights Programs at Advocates for Youth, explains what she wants her younger self to know as a queer, Muslim woman.

I grew up in Karachi, Pakistan, in a middle class family where although getting a good education was a priority, I understood a heartbreaking reality early on: I was expected to marry and center the needs of my future husband and his family over anything else. Then, when I was 16, my family unexpectedly immigrated to the United States. I arrived broken and disillusioned, but also hopeful that I could start a new life away from Pakistan, and away from Islam. It was my chance to find happiness and pursue the life I had always wanted, which in my mind meant being able to make decisions about my life independently of what anyone, including my family, thought; to not have to think about marriage as the end goal; to be able to carve out a small space for myself and my ideas in this vast world.

That was over 20 years ago. When I look back on the heartbreak I experienced as a young person, not knowing if I was going to make it, feeling a deep sense of isolation, I want to write a love letter to my younger self.

I want to tell her that it is not going to be easy settling into her adopted country. That no one would tell her that the more that she tries to assimilate and forget where she comes from, the more depressed she will become. The depression will come from internalizing the racism she will encounter both in high school and in college. From times like when a teacher asked her if he can call her “Paki” because her name was too difficult to pronounce, and when everyone in class laughed at that joke. Her depression will deepen when her father passes away, three years after immigrating, leaving her family feeling very vulnerable.

I want to tell her that when she comes out as queer at 19, around the time of her father’s passing, she will find very little empathy within the white LGBTQ community at her college. She will find that her experiences as a recent immigrant from Pakistan, and her fear about the consequences of family finding out that she is queer, won’t be relatable for others. While many around her will speak casually about having LGBTQ members in their families, she will not even be able to think of “LGBTQ” and “family” in the same sentence.

And I want to tell her that despite everything that she will have to endure, she will find her community of LGBTQ Muslims and people of color who will show her that it’s possible to collectively fight for a just world. In 2019, against the backdrop of bigotry, she will see her own experience and identities represented in new and powerful ways.

From the first Bollywood film to have a lesbian protagonist to a gay, British Pakistani stylist on Queer Eye, this cultural tsunami is opening the door for so many conversations that LGBTQ Muslims are desperate to have with themselves and their loved ones. If my younger self had had role models like these, her own story — of being outed to her mom by her brother, and the ensuing heartbreak of feeling like she disrespected the sacrifices her parents made — might have had a different outcome.

But I would tell her one more stunning fact: that even though this country will be led by a president whose policies demonize Muslims to advance his own political agenda, for the first time ever, there are two Muslim women Congress members who are fighting for us. And when I hear Rashid Tlaib and Ilhan Omar speak, I am filled with hope about what can be possible. They are already an inspiration by winning on their own terms and being unapologetic about their identities: for Tlaib, being Palestinian and Muslim, and for Omar, being a hijabi Black Muslim refugee from Somalia.

This Valentine’s Day, I am writing a love letter to my young, queer, Muslim, immigrant self in the hopes that she understands what is possible, and holds on for what is yet to come.