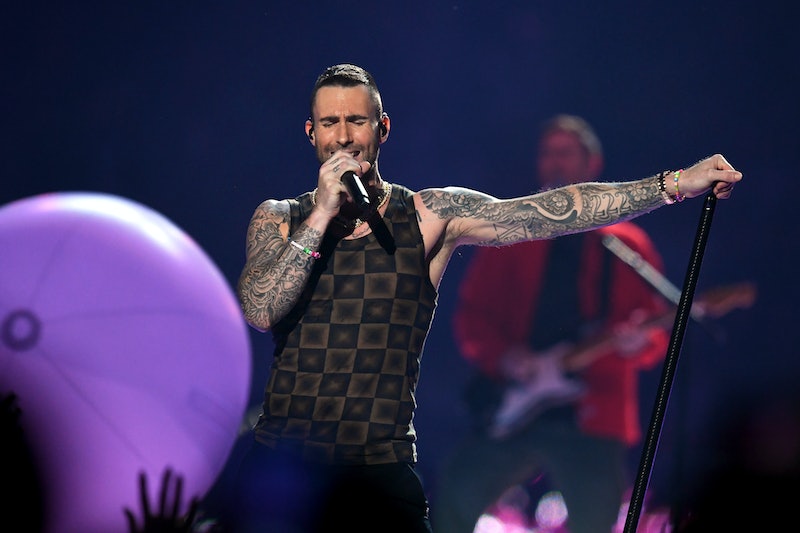 Mere minutes after singing the closing notes of the Pepsi Super Bowl haftime show, the Maroon 5 frontman took to Instagram to address the controversy surrounding the gig. And Adam Levine's response to his Super Bowl halftime performance thanked his fans and his critics, showing that, if nothing else, the band was well aware of the potential political context of their gig. (Though it's unclear how aware they are about the Twitter reactions to Maroon 5's halftime show.)

"When we accepted the responsibility to perform at the SBHTS, I took out my pen and just wrote," Levine said on Instagram, accompanied by two photos from his set, putting the "One Love" light display in the spotlight. "Some of the words that came to me in that moment eventually made their way onto the incredible lanterns that flew high and low tonight." As seen during the show, the lucky audience members were given lanterns during the show, and encouraged to let them loose. Levine continued:

It's hard not to see Levine's post-show message to fans (and critics) as a subtle nod to the backlash Maroon 5 got for agreeing to perform during the big game. The words "Endure," and "Kneel" seem especially notable given the NFL's treatment of Colin Kaepernick. Kaepernick, of course, is the former NFL player who led a silent protest against police brutality by kneeling during the National Anthem — an act which many believe led to his being essentially blacklisted by professional teams.

Before Maroon 5 confirmed that they would be headlining the halftime show, rumors emerged that Rihanna and other musicians were turning down the Super Bowl halftime show gig to show solidarity with Kaepernick. And any band that eventually accepted the gig was bound to get a bit of pushback, as it became impossible not to see an acceptance of the NFL's offer to play the Pepsi Super Bowl halftime show as a show of support for their actions regarding Kaepernick.

Levine previously addressed the criticism in the days leading up to the Super Bowl. "I'm not a speaker. I'm not a public speaker. I do speak, but it's through the music. My life's work and what I put out into the universe has been positive and hopefully inspiring," he said in an interview with Entertainment Tonight. "We are going to do what we keep on doing, hopefully without becoming politicians and continuing to use the one voice we know how to use properly."

In that same interview, Levine revealed that the message he wanted to send with his Super Bowl performance was simple. "To make people understand, we got you," he said. "We got you."

Based on the reactions to the show on Twitter, it's not exactly clear that everyone got the message. But, hopefully, Levine's Instagram post will help people understand his intentions going into the Super Bowl halftime show.