Olympic season gives people the feels. From those shipping Canadian ice dancing pair Tessa Virtue and Scott Moir to Shaun White's gold medal win on Tuesday, the feels are real. Now, there's another reason to get all up in your emotions. Adam Rippon and Mirai Nagasu's matching tattoos are the epitome of friendship goals — and the story behind them will make you love this pair together just as much as you love them individually.

Rippon and Nagasu have both already had major moments during the 2018 PyeongChang Olympics. During the team figure skating competition, Rippon skated a near flawless program while Nagasu made Olympic history as the first American woman to land an epic triple axel. While their performances undoubtedly helped Team USA secure bronze in the competition, they share more than a medal.

According to PopSugar, Nagasu and Rippon have matching, white ink tattoos as symbols of their friendship and shared experiences in the Olympic games. During the 2014 Sochi games, both Nagasu and Rippon failed to make the Olympic team. While you've probably heard the story about the pair eating In-N-Out on the roof of Nagasu's apartment, there's another part of the pair's journey, and that's their tattoos.

In an interview with Yahoo! Sports Rippon cheekily admits that "the rumors are true," and the pair do, in fact, have matching tattoos. How did it come about? Rippon details their story explaining that he told Nagasu that given their shared experience of not making the Olympics in 2014, that he wanted to get a matching tattoo with her. Nagasu agreed, and he gave her the reins on what they would inevitably get.

While they did at first joke about getting the Ambercrombie Moose, they ultimately settled on something different. Rippon says, "Finally, she found this little symbol, and it's a circle with two lines through it, and it's a glyph that means power. And she said I want to get this tattoo, and I said, 'OK.'" 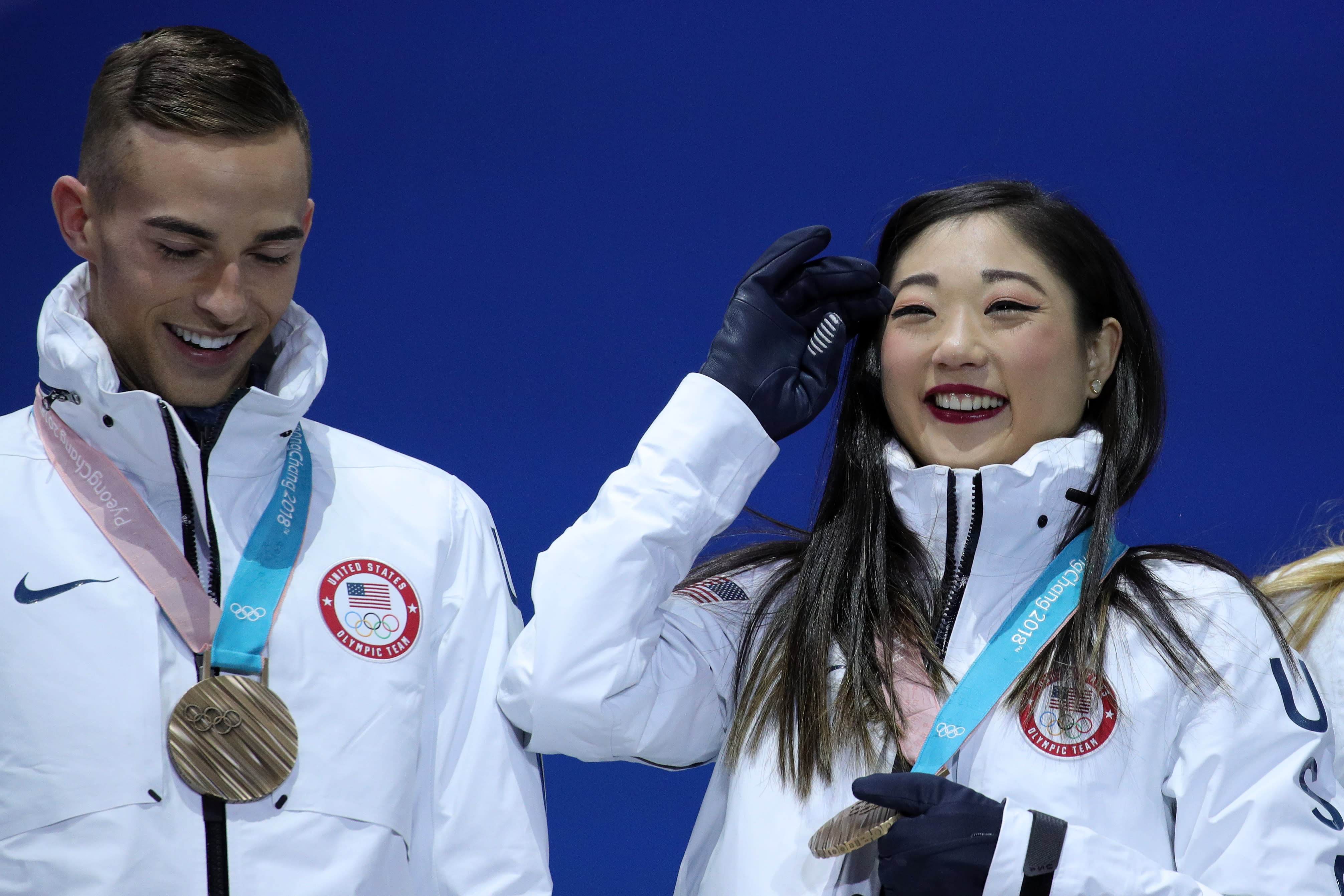 You probably won't be seeing them, though. Rippon has multiple tattoos, but they're all in white ink, so Nagasu also got the glyph in white ink on her wrist while his is located on his inner thigh near his knee.

While the story of the pair (and Olympic roommates) tattoos is sure to can more fangirling over their friendship, they were already the stars of the show anyway.

People were already on the Rippon-Nagasu train during the team skate.

Their love for one another is making viewers cry big fat Olympics tears.

Were you on the couch? At Starbucks? At In-N-Out getting a Double Double? Someone start a petition to get these two free Animal Style fries for the rest of their lives.

While everyone loves the dynamic duo that is Tara Lipinski and Johnny Weir, could be Nagasu and Rippon be next?

Of course, there's the fact that Rippon, an openly gay man, and Nagasu, the daughter of immigrants, are America's sweethearts, and nothing could be better than that.

Outside of the fun anecdotes, though, both Nagasu and Rippon are inspirations — and not just to other skaters. Their hard work, candidness, and love for one another is essentially what the Olympics are all about.

If you want to see more of Rippon and Nagasu, there's good news. They'll be competing in the individual medal competitions with the men's competition beginning Feb. 16 and the women's on Feb. 21. Grab your In-N-Out and your best friend, and get ready to cheer on these Olympic BFFs.