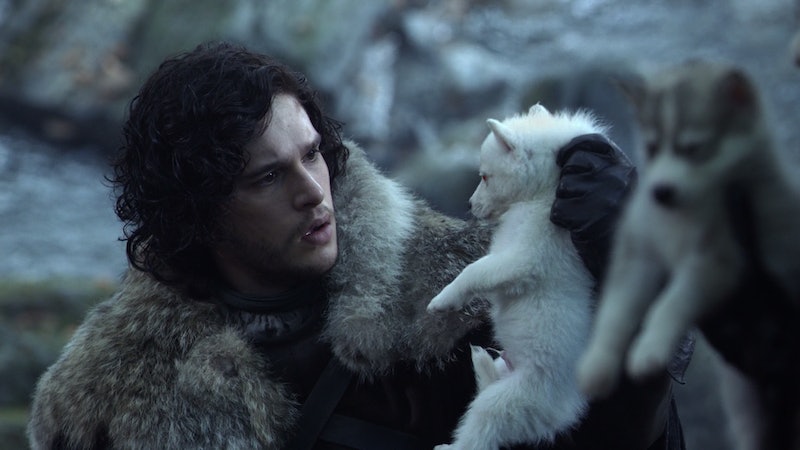 I mean, you know you were wondering. The whole time you were watching Season 7, you were trying to figure out which character you from Game of Thrones you should dress up as for Halloween — and which character your dog should dress up as. Because, while you know winter is coming for the both of you, you're more keen on the idea of being your own characters. And dressing up with your friends is great, but pairing up with your dog is way better because a) your dog will look adorable, and b) it's pretty much the best bestie you have. You two are just repping the Game of Thrones cast in totally different ways. Plus, you don't have to fight over who is who. You're the pack leader, it's your choice!

That said, depending on the size and shape of your pup, they might be a better candidate for certain costumes than you. I mean, I know personally that my pup will make a much better dragon than I ever will. Despite my fiery temper, my dog's just got the shape for a dragon costume. It's his destiny. So here are some GoT costume options you might want to consider for your pup. Remember, these are just some creative ideas that you can put together with pieces from various stores, most of which offer online ordering, making Halloween for you and your pup a piece of cake.

As the Queen of Dragons, Daenerys is one bad ass, well-dressed warrior. She takes the term "slaying" to the next level. Your pup will need a blue dress, a icy blonde wig, and a dragon toy.

With a fluffy messy of dark curls, everyone will know who your dog is dressed up as. Add some boots and a thick black coat, and not only will your pup be warm and protected, but he'll be totally Jon Snow.

If you're going for easy, cute, and comfortable, with a pop culture twist, this is the costume for your pup. All you'll need is a dragon costume and a few dragon pet toys. You can either attach them to the costume or allow your pup to carry them around all night!

The intense warrior costume will look plain adorable on your pup. And because putting eyeliner on your dog isn't OK at all, this costume might be best for dogs who have dark coloring around their eyes! You'll just need an epic pony tail, and some leather leashes.

Cersei might be a bit icy, but damn, she's got a great look. Perfect for the pup with a sassy attitude, this costume requites a red coat, a faux fur neck warmer, a crown, and a nasty bark.

This chick is fierce and badass, and in Season 7, she had some epic scenes. All your pup needs for this costume is a chic black coat, some fur, and a wolf toy.

I mean, this is a given right? Let your dog dress up as the Direwolf spirit it has inside. While you're at it, you might want to get yourself a mask too — every wolf needs its pack.

Make everyone's White Walker nightmares come true by dressing up your cute pup as a zombie dog. All you'll need is a skeletal costume and a rubber hand dog toy for you pup to carry around.

Tyrion always has a great, buckled coat. Which is perfect, because it's an excuse to get your pup a new chic fall coat. He's always drinking, so make sure you bring a toy wine cup.

Tormund is massive, hairy, and seems to be always covered with snow. This is a great combination of attributes that can be easily applicable to a dog! You'll need a furry dark coat, a mess of orange hair, some safe fake snow, and boots.

While Tommen might not have made it past the sixth season, it doesn't mean we can't bring him back for Halloween. You'll need a caped costume (you can improvise here with Batman or Star Wars, easily), some boots, an epic crown and a blond pet wig that you'll likely have to cut.

More like this
21 Absolutely Adorable Christmas Gifts For Dogs
By Carolyn Steber
30 Winter Outfit Ideas Courtesy Of Hailey Bieber, Rihanna, & More
By Dominique Norman
35 Genius Secret Santa Gifts For Someone You Don’t Know Very Well
By Rebecca Deczynski and Lauren Grant
13 Gifts From Latina-Owned Businesses For Everyone On Your List
By Marilyn La Jeunesse
Get Even More From Bustle — Sign Up For The Newsletter