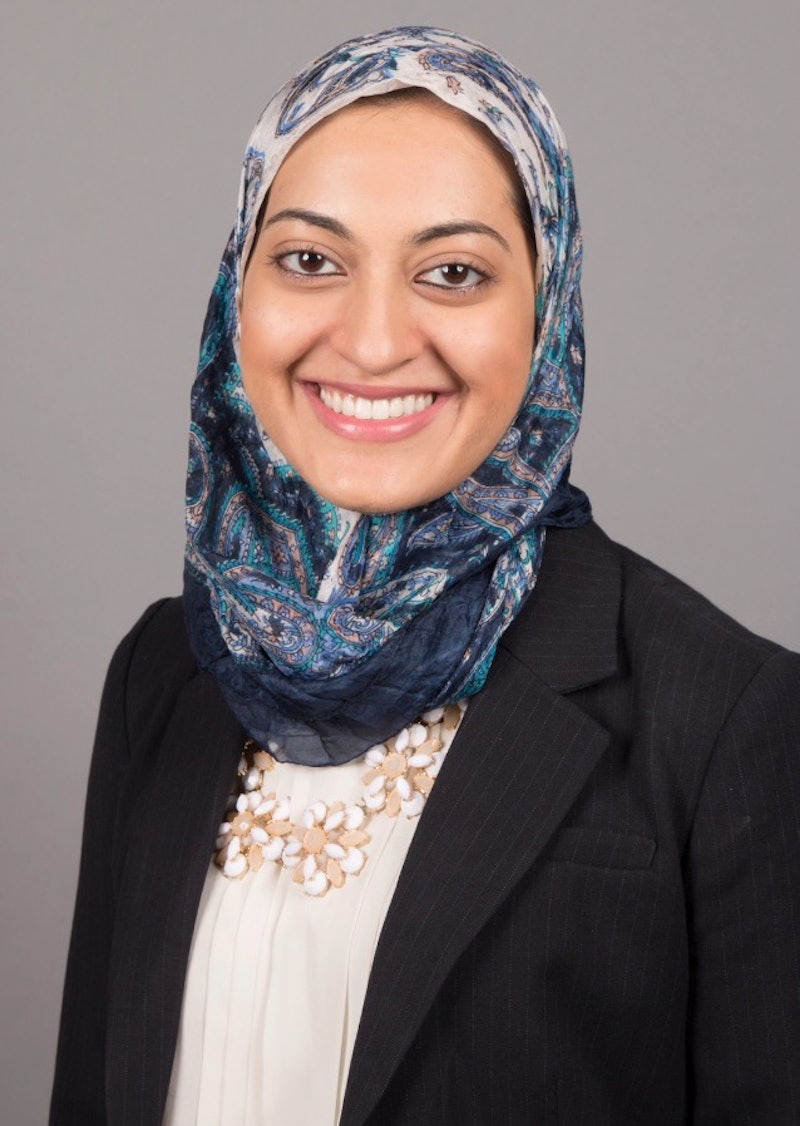 When she was in high school, Afreen Allam, now founder and CEO of the biomedical company SiNON Therapeutics, began volunteering at the Duke Cancer Center. “I come from a typical Asian family where medical school was the only route that was an option,” Allam, 28, tells Bustle; this volunteer work was meant to help further her progress along that path. But it wasn't easy — although not because of the work itself. “The first two weeks were extremely hard," says Allam. "I wasn’t used to seeing that kind of pain and suffering.”

Indeed, she frequently thought about quitting — but still, she kept going back, week after week. She ended up volunteering there for seven years, and over the course of her time there, she learned two very important things: One, she wanted to help people; and two, although she knew she didn’t want to work in the hospital system for the rest of her career, there was another way to accomplish that goal — through research. And with SiNON Therapeutics and her work developing remarkable new technology she calls the Carbon Dot, she’s been able to do just that.

Her path hasn’t been typical: She graduated from NC State with a double major in microbiology and biochemistry, but she doesn’t have a PhD, and she didn’t go to medical school. She does, however, hold an MBA from Duke University’s Fuqua School of Business — and between that degree, her undergraduate studies, and more than eight years of hands-on research in nanomedicine, she’s uniquely positioned to run a biomedical company. And although people have continually told her throughout her life that she didn’t have what it takes to accomplish her goals, she’s disrupting the system in powerful ways — and her work could provide breakthroughs not only for treatment of neurological diseases, but in a number of other arenas, as well.

SiNON’s focus is the Carbon Dot, a nano-particle that functions as a delivery tool that can transport medicine and other treatments through the blood-brain barrier. Allam actually began the research that would become the Carbon Dot during her undergraduate studies. During her sophomore year at the NC State she wanted to study abroad — but in order for her parents to agree, her program had to satisfy a few conditions. “My dad, who is from India, put two conditions,” Allam says. “First of all, it has to be in India, since I hadn’t been since I was four; and the second condition was, I had to get into one of the IITs” — that is, a program that was part of the Indian Institute of Technology, a network of prestigious engineering schools spread out across the entire country. Allam describes them as “basically like the MIT and Harvards of India.”

The conditions were seemingly impossible — but Allam was accepted to a position in the chemistry department with Dr. Sarkar at IIT’s Kanpur campus. She spent most of her time in the lab, during which time she began developing what would become the Carbon Dot. Originally she was planning on using this research merely as a stepping stone to help get into medical school, but the work turned out to be so unique that Allam’s father, who has a degree in organic chemistry himself, encouraged her to apply for a patent. She was only 20 at the time — but in 2013, the patent was granted.

According to a United Nations report from 2007, nearly one in six people will develop a neurological disease in their lifetime. The trouble is, as Allam explained recently at the 2017 CED Life Science Conference, that only two percent of the drugs used to treat these diseases and conditions can pass through what’s called the blood-brain barrier, a semipermeable membrane barrier that separates the brain’s circulating blood and the central nervous system’s extracellular fluid. To be fair, the blood-brain barrier’s job is, well, to be a barrier; it’s a defense mechanism meant to keep things out that aren’t supposed to be there. But this means that it can also interfere with treatment, so there’s been an ongoing struggle to try to find a way to easily and safely deliver the drugs that will help neurological diseases through the blood-brain barrier.

That’s where Allam’s Carbon Dot comes in. A nano-particle, the Carbon Dot can safely and non-invasively transport a wide variety of substances through the blood-brain barrier — drug molecules, diagnostic markers, you name it — in a way that improves drug localization, resulting in a reduction of the amount of drug that needs to be administered and lower risks of toxicity and side effects. She describes it as a sort of “Trojan horse” that carries drugs across the blood-brain barrier — and indeed, this description is where SiNON Therapeutics’ name comes from: In Greek mythology, Sinon was the name of the soldier who, having pretended to have deserted the Greeks, convinced the Trojans that the giant horse left outside the gates of Troy was a gift to the gods.

Allam during her undergraduate years.

Allam realized she didn’t know much about what it would actually take to run a company geared toward developing her research further. So, instead of applying to medical school, she applied to Duke’s business school and was accepted. In the fall of 2014, she entered the 16th annual Duke Startup Challenge, a university-wide entrepreneurship competition with a $50,000 prize for the winner.

“When I applied, I wasn’t expecting to win,” Allam tells Bustle. “It was more of getting a business plan ready, and getting things that you normally don’t focus on when you’re just worried about the day-to-day operations. This was something that forced me to get a business plan together, forced me to make a good pitch deck, be ready to present to potential investors or just people who would be interested in technology and collaborators.”

Indeed, the venture capitalist responsible for writing that $50,000 check was known for expressly not investing in life sciences; she focused primarily on tech companies. When the venture capitalist addressed this point in her keynote, says Allam, “I was like, I’m pretty much done for.” But, she says, “I was [also] like, I’m still going to give it my best shot, because this is a once-in-a-lifetime opportunity.” There were maybe 400 people in the room; maybe someone would be interested in what she was presenting, even if she didn’t win.

To her immense surprise, she discovered in the fall of 2015 — a year after she had first entered the competition — that she did win. With the $50,000 prize from the competition, Allam was able to further develop SiNON Therapeutics and the Carbon Dot. This win proved to be just the beginning as well; earlier this year, Allam and SiNON also won the NC IDEA grant for another $50,000, marking the first time this grant had gone to a life sciences company. The refrain here is familiar: “Before applying, people were like, ‘You’re not going to get it, don’t even waste your time applying,’” says Allam. But, she persisted; as she puts it, “I’m still going to apply — if I don’t get it, at least more people will know what I do.”

Throughout all her success, however, Allam has still continually come up against the same barriers: She is a woman of color in a white male-dominated field, and despite her knowledge and experience, she doesn’t have a PhD or a master’s degree in a science-related field. Every conference she attends, she says, the makeup is typically older white men; indeed, she says, “I’ve been to some conferences where there’s 500 [men] and maybe three [women]." It definitely affects the way they interact with her, as well. “When I present, this wall automatically goes up. First off, I’m female, I’m younger, I look different,” she says — and then, when they find out she doesn’t have a PhD, they often simply can’t understand how she’s been able to do everything she’s done without one. “Even when I go to talk to potential investors, they’re like, ‘Wait, you don’t have a PhD, so how are you going to run the company?’,” she says. “The first thing they want to do is, ‘OK, we’re going to get a new CEO.’”

Allam knows that she’s still facing an upward climb. “We always have higher obstacles to overcome,” she says. “Unfortunately, that’s been the case for many generations. Now, not being a white male in the U.S. is also going to add on to that, because of everything going on politically — where it does impact the different fields, and it does impact STEM women, especially STEM women of color.”

But still, she remains optimistic. For anyone else harboring dreams of entrepreneurship in STEM, she has this piece of advice: “If you believe in your dreams and your technology, don’t let anybody tell you otherwise. There will be many people that you’ll run into that will tell you that you’re not smart enough, you don’t have the right to do the research, you don’t have what it takes to be an entrepreneur in this field. But everyone starts somewhere, and without you making your mistakes and learning things as you go, nobody’s ever going to become successful.”

More like this
Wimbledon Alters All-White Kit Rule Amid Candid Period Discussions
By Catharina Cheung and Rachel Mantock
Iran Has Issued A Death Sentence Over Mahsa Amini Protests
By Catharina Cheung, Darshita Goyal and Maxine Harrison
Here’s How To Make The Spotify Music Festival Lineups Taking Over Instagram
By Alexis Morillo
15 Gifts That Bring Your Faraway Loved Ones Closer During The Holidays
By Kaitlin Marks
Get Even More From Bustle — Sign Up For The Newsletter