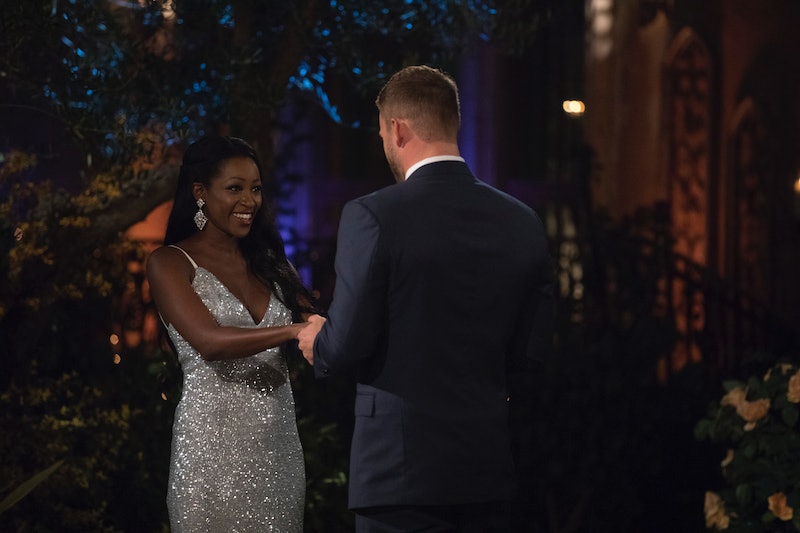 Everyone keeps talking about how Demi is a pot-stirrer on The Bachelor, but they're neglecting to mention that Onyeka seems to be one, too. Not only did she confront early-season villain Catherine for "stealing" too much of Colton's time, she also confronted Nicole for supposedly not being there for the right reasons. Onyeka is getting a side villain edit just as Demi is sort of fading from the drama — so what is Onyeka doing after The Bachelor now that filming has ended and she can watch it all played back to her?

Remember, all of this drama was filmed months ago back in the fall of 2018. Now that it's a new year, and she's seeing the show air, she wants people to know that she thinks it's not reflecting the real her. "This is your daily reminder to love yourself even when others don’t," she wrote on a recent Instagram post. She added:

"It’s only a small glimpse that you all see on TV and even though you think you have it all figured out..trust me, you don’t. I truly believe that everyone is entitled to their own opinion, but that’s all it is....an opinion. I’m going to continue living my BEST life which consists of me only caring about opinions from people who actually know me as a person."

Defending herself from Bachelor fans isn't the only thing Onyeka's done since filming concluded. Her social media accounts offer a window into her post-show life.

Being Super Relatable At The Grocery Store

Whose check out line hasn't looked like this at some point?

And Super Relatable At Work

Someone needs to fix the keyboard setup ASAP.

Preparing For The New Year

Joking About Her Bachelor Limo Arrival

"Wow. Still can’t believe he eliminated the other 29 girls after this magical moment," she joked in the caption of this photo from the premiere.

Fangirling Over Other Bachelor Stars

Former Bachelor Sean Lowe does have quite an epic Twitter game when it comes to livetweeting The Bachelor.

Dude, who starts a DM with an insult? Thank u, next!

Raising Awareness For A Cause Close To Her Heart

Dark blue is the color for colon cancer awareness, and Onyeka posted this in support of her friend who's in remission from the disease. "We should all continue the battle to put this awful disease to an end," she wrote in her caption.

Is it even Sunday if you don't take a selfie? (JK, I take them every day of the week.)

Promos for the Feb. 11 episode of The Bachelor teased the dramatic conclusion of Onyeka and Nicole's fight, and it remains to be seen if they'll make it through the rose ceremony that was left hanging on a To Be Continued note. But no matter what happens next, Onyeka wants you to know that there's more to her than the snippets you see on TV. And she's not going to listen to any of her haters.