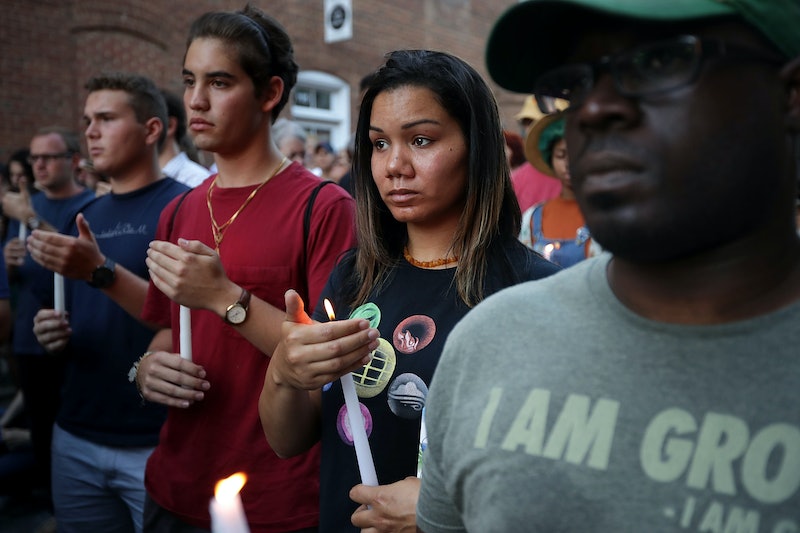 After the deadly white supremacist violence in Charlottesville, Virginia, over the weekend, scores of Americans walked into majority-white workspaces today feeling dread and anxiety. Had I not taken the entrepreneurial route earlier this year and started a business, I would have been among them. But I know the special apprehension and anguish many people of color feel after racist attacks on our basic right to exist as Americans anywhere. Events like those over the weekend make it harder to return to workspaces steeped with racial undertones and often outright bigotry.

I’ve worked hard not to harbor ill feelings towards colleagues just because they’re white and part of the ruling majority in most major industries. But in the years since the uprising in Ferguson, I have begun to resent the complicity in their silence. I have been astonished at the ease with which life can go on for them when, days and weeks after racist violence, while I am still looking over my shoulder, cringing at the double-talk from authorities, and watching in horror as the lives of people who look like me and my family are rendered worthless. And personally, after years of putting on a public brave face following the senseless beating of another black person, the state-sanctioned murder of someone living her life, the snuffing of immigrant lives, I'm glad not to have walked into a predominantly white office today.

Though each person experiences such Monday mornings differently, it’s easy to discern what some of us would identify as concrete reasons many people of color cannot bear days like today.

We don't want to, as is often expected, help white colleagues process what happened. Just as we resent being treated like in-house consultants on all things diversity, we are also not trained social workers, trauma therapists, or ordained clergy ready to suspend our own suffering for the sake of consoling, reassuring or absolving white colleagues who want to appear concerned while doing exactly nothing to change the status quo at work, in their gentrified neighborhoods and segregated schools.

Over the years, I have oscillated between doing all those conciliatory things and closing myself up to any and all comments and interjections from woke colleagues and indifferent ones alike. Other times, I cried quietly along with a woman of color in a bathroom or on a walk around the building because we were suffocating in our open work area.

We were bound by silence because we climbed so long and so hard to get to where were.

The looks of lasting heartbreak exchanged between colleagues of color in passing, in meetings, in line for coffee, really hurt. The knowing glances as bosses tried ineptly to say something, anything, to acknowledge the events could fill chapters in history books. But we were bound by silence because we climbed so long and so hard to get to where were. We sacrificed and endured so much. Holding back the lump in our throats only made our voices stronger when we spoke to one another, behind closed doors, over drinks, and while breaking bread.

So many will remain trapped in that emotional and existential crisis. This country will not change fast enough to free them from this anguished status.

In the racist violence I have witnessed, the only ones who have ever been able to claim "this is not us" are the somnambulant ones who showed up at work today as if nothing has changed in their world, quietly aware their callous indifference fuels the fires that ignited Charlottesville, and every place before.

I cannot pretend that what happens in places like Charlottesville does not impact me directly. Yesterday, I texted my college-age nieces in New York City to ask if they planned to attend any rallies or vigils, since, in light of Ferguson and Baltimore and Milwaukee, I relinquished the moral authority to dissuade them from acting on their beliefs, even in the face of almost certain violence. I can only remind them that they are right, that they are loved, that I stand with them and will support them.

I know they need to be there because they grew up knowing that this is their country and that if you want something bad enough, you have to sacrifice for it.

They are the reason I cannot walk into a mostly white workspace and pretend that it's not a bubble in which I'm expected to suspend the reality of what's happening an hour from where I live, where my children attend public schools, where I intend to set roots for their children.

I am glad I stepped away after almost two decades in predominantly white workspaces. I can no longer handle the practiced indifference, as if what happens to black women does not threaten everyone’s safety. I can no longer feign understanding at their confusion about coordinated reactions to police brutality, as if the targeting of black young men would never lead to a deliberate attack on any other group. I can no more listen to platitude-filled analysis in which there are “sides” and a “complicated history” and “misunderstood loners.” We know better.