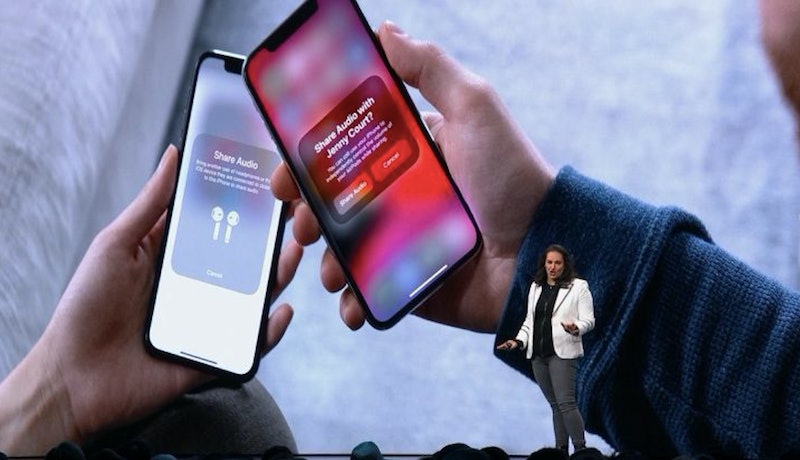 Many a romantic moment has involved sitting on a bus or in a park and giving that special someone one of your headphones so you can listen to some John Legend or Smash Mouth together (I'm a woman of eclectic taste). Well, sharing music is about to get a big techy upgrade. Apple's AirPods Audio Sharing in iOS 13 means you'll be able to share music — without sharing headphones. Sure, it's not as romantic, but it's probably far more hygienic.

Apple announced Audio Sharing at its World Wide Development Conference (WWDC) in San Jose on June 3. Per the presentation from Apple, all you need is a pair of AirPods and a friend with a pair of AirPods. While Apple didn't demonstrate how the share will work, it appeared from the photos shared at WWDC that if you put your phones close enough together, you'll be able to share audio both from music and videos, so you can enjoy listening together. According to The Next Web, this feature will be introduced as part of iOS 13, expected to be available this fall.

TechCrunch reported that some other pretty awesome audio features will be landing with the same update. There's Handoff support to HomePod — which allows you to make any audio playing on your phone jump to the HomePod when you hold your phone near it — and the ability to reply to messages directly through your AirPods with Siri.

Will you miss the romance of sharing an earbud with someone you're flirting with, just so they can hear your favorite song from The Shins or listen to the dulcet tones of Sisqó serenade you with "The Thong Song"? Maybe, maybe not. Apple is definitely changing up its music game at the moment. Firstly, the company announced it will be bringing iPods back, which seems like a weird flex, to be sure. It also announced that iTunes, the first place you ever downloaded music legally, will be retiring.

But don't worry, you won't lose your music when iTunes shuts down — everything will be redistributed into Apple Music, Apple TV, and Apple Podcasts with Apple's newest operating system, macOS 10.15 Catalina. But still, it's a pretty big shift for anyone used to operating out of iTunes. On the plus side, it looks like the iOS 13 Dark Mode, yet another feature announced with the update, will be a super sleek option that will make you feel like you're a superhero movie villain every time you use your phone. And that's something we can all get behind.

While listening to music together on the bus or at a park — and sharing earphones to do it — felt like a rite of passage, the truth is it will probably seem antiquated and cumbersome within two weeks of this rollout. The next generation won't even be able to imagine how we were tethered to our CD players, iPods, and phones — let alone how we somehow thought it was romantic to exchange earwax. The future comes at you fast — and Apple is just helping it right along.