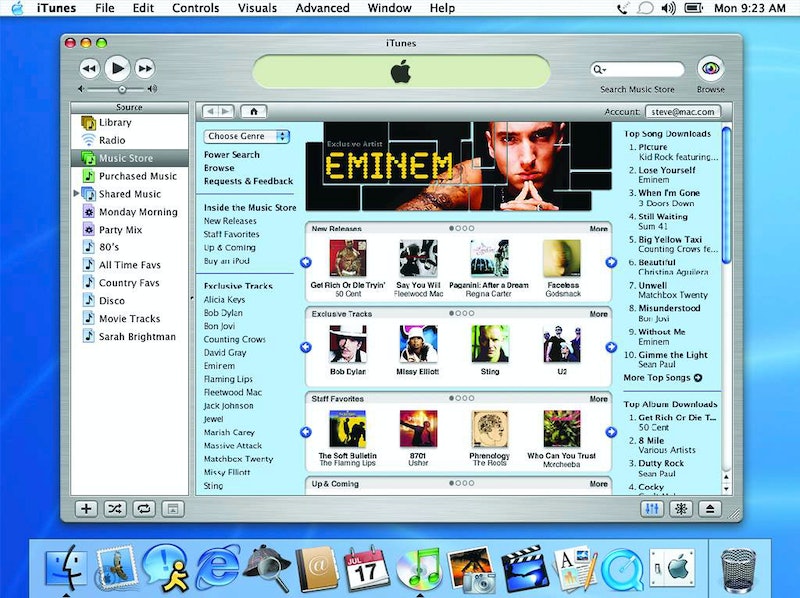 I'm sure you've heard the news, but ICYMI, iTunes is retiring. Yep, that's right: The 18-year-old media management program is getting the boot with the release of Apple's newest macOS operating system, according to an announcement made by the company at its 2019 WWDC conference on June 3. RIP iTunes! As we wipe a lil' tear and pour one out for the trusty program that housed our most precious slaps and bangers for nearly two decades, we're all probably also simultaneously wondering what will happen to your music stored in iTunes. Spoiler alert, not that you needed it: You'll be fine.

Apple's newest operating system, macOS 10.15 Catalina, is set to launch this fall — and as mentioned, it won't include iTunes at all. Instead, media that was formerly clumped together in our iTunes library will be simply be broken down into a trio of three separate apps: Apple Music, Apple TV, and Apple Podcasts. These three apps are where your files will end up — so while iTunes may be disappearing into the abyss of ancient software past, your music, movies, shows, and podcasts will be safe and sound in their new respective digital homes.

TBH, iTunes hasn't been particularly useful to me personally since my late teens — a special era of time during which my iPod Classic was practically an extra limb and I'd spend hours each day obsessively filling in the correctly-formatted artist, track, and album names in the program for the songs I'd ripped from mix CDs made by my friends. Those were the days.

If you don't like big changes, don't worry. Most iPhone and iPad users likely have already noticed the standalone Music, Videos, and Podcasts apps as being pre-packaged in recent operating systems, so it won't be too unfamiliar. The change will likely be a bit more significant for Apple desktop and laptop users (although, as of now at least, iTunes for Windows is reportedly remaining unchanged).

So as much as I love the drama of a looming, Y2K-level-paranoia technological catastrophe being on the horizon (i.e. losing your beloved music/video/podcast collection), updating to Catalina isn't likely to result in any disaster of the sort. That said, it's probably still a good idea to go ahead and back up your iTunes library anyway, as you should before any iOS update or hardware upgrade.

So, let's take a peek at where, exactly, your media files are going with Catalina's updates and the demise of iTunes. Here's a quick tour of their shiny, new, standalone-app homes:

This app should already be familiar to you, especially if you're an iPhone or iPad user. Here lies the updated home to all of your music and audio files — exclusively so, once iTunes disappears forever — and it will also offer personalized recommendations for music, according to the Verge. "How the transition will work is still to be confirmed in regards to your existing iTunes content, but moving downloaded media from iTunes to Apple Music or the Apple TV app shouldn't prove too difficult," wrote TechRadar on its site.

Welcome to the new home for all of your video media and streaming needs: That means movies, TV shows, video clips, the works. According to The Verge, this app will support both 4K HDR and Dolby Atmos audio. It'll also be home to an upcoming streaming service, if you choose to subscribe: "Set for release in Autumn 2019 ... the Apple TV Plus streaming platform is set to rival competitors like Netflix, Amazon Prime Video, and the yet-to-be-released Disney Plus," reported TechRadar.

And finally, your podcasts — which will, unsurprisingly, live in the Apple Podcasts app. This app will be familiar to iPhone/iPad users, but will make its first appearance as a standard Apple desktop app with the introduction of Catalina. The Verge reported that along with this app, Apple plans to introduce a "new machine learning feature that indexes shows so that people can search for content more easily," which should streamline the overall podcast-searching experience.

There you have it — your downloaded music, podcasts, and videos will all have new digital homes come iOS 13. Let's breathe a sigh of relief.