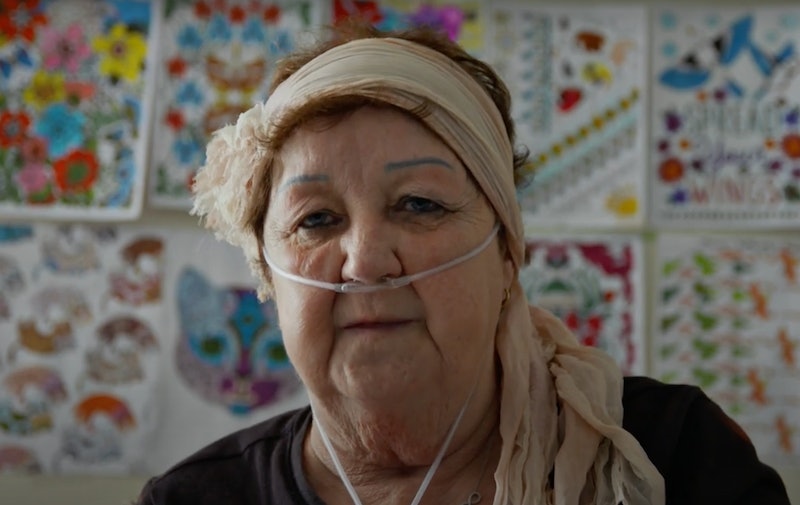 FX explores one of the biggest names behind Roe v. Wade in their newest documentary, AKA Jane Roe (out now). The landmark Supreme Court case would go on to define a large part of the feminist struggle for decades to come, making its plaintiff, Jane Roe, a household name. But it wasn't until much later that that Jane Roe stepped forward as Norma McCorvey — a complicated figure who would eventually become one of the biggest opponents of the Court's ruling. AKA Jane Roe charts McCorvey's transformation from a pro-choice hero to an anti-choice advocate, and also makes a startling revelation about its subject. Read on for more about Norma McCorvey's deathbed confession, explained.

Roe v. Wade was the landmark U.S. Supreme Court ruling that legalized abortion throughout the United States. In 1969, McCorvey, known only as Jane Roe at the time, became the first plaintiff in that case, with her story illuminating just how difficult it was to receive an abortion in her home state of Texas.

According to the Washington Post, when the case first began, McCorvey was pregnant with her third child; her first child was being raised by her mother, while her second child was put up for adoption. Though she would go on to have her third child, she remained the case's plaintiff.

For a long time after the conclusion of the case, McCorvey remained anonymous. According the New York Times, she attended rallies in support of abortion rights and worked in women's clinics.

But in 1995, McCorvey changed her stance on abortion. She became a born-again Chrstian, was baptized on television, and joined the staff of Operation Rescue, an anti-abortion group. McCorvey detailed her conversion in her 1998 book, Won by Love. That same year she told the Associated Press, "I'm 100% pro-life. I don't believe in abortion even in an extreme situation. If the woman is impregnated by a rapist, it's still a child. You're not to act as your own God." She would continue working as an anti-choice advocate up until her death in February 2017.

However, just months before her death, McCorvey made a startling revelation. In what she calls her "deathbed confession" she told the filmmakers behind AKA Jane Roe that her later-in-life anti-abortion advocacy had all been in an act. “I was the big fish,” McCorvey says in the documentary. “I think it was a mutual thing. “I took their money, and they’d put me out in front of the cameras and tell me what to say.”

Others in the documentary also corroborated her account. The New York Times reports that evangelical minister Rev. Rob Schenck admitted that they paid her to speak out against abortion. “What we did with Norma was highly unethical,” Schenck shares in the documentary.

The film's director, Nick Sweeney, never anticipated that there would be a deathbed confession of any kind in the film — though he's come to understand why McCorvey would want to come clean. "Throughout her life, many different people wanted Norma to fit their preconceptions of Jane Roe," Sweeney told CNN. "She just wanted to be unapologetically Norma."

More like this
How Andrea Riseborough Got Nominated — & Almost Disqualified For An Oscar
By Jake Viswanath
Anne Hathaway Shared A "Thrilling" 'Princess Diaries 3' Update
By Darshita Goyal
Kukulkan From 'Wakanda Forever' Has A Surprising Connection To Marvel History
By Grace Wehniainen
James Cameron May Come To Regret His 'Titanic' Door Experiment
By Stephanie Topacio Long
Get Even More From Bustle — Sign Up For The Newsletter
From hair trends to relationship advice, our daily newsletter has everything you need to sound like a person who’s on TikTok, even if you aren’t.