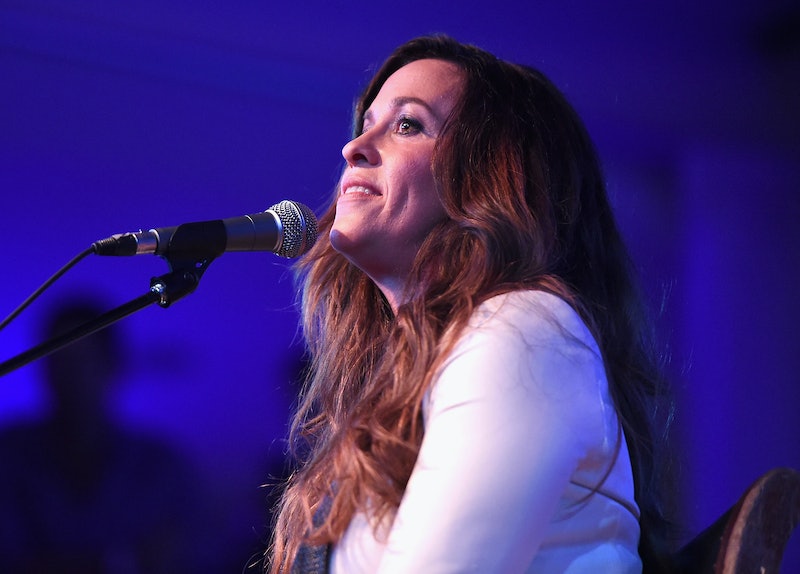 "For me [after giving birth] I would just wake up and feel like I was covered in tar and it wasn't the first time I'd experienced depression so I just thought Oh, well, this feels familiar, I'm depressed, I think," Morissette told Nicole Cliffe for SELF. "And then simultaneously, my personal history of depression where it was so normalized for me to be in the quicksand, as I call it, or in the tar. It does feel like tar, like everything feels heavy."

Unlike Morissette, who already lives with depression, people who have never experienced depression may have a harder time understanding PPD. How can you be depressed when you're holding your little miracle? Why aren't you glowing and nauseating everyone around you with your joy? Reading Morissette's description of her PPD experiences made me feel like that if I do decide to have a child, postpartum depression is normal and treatable. And if I never have children because I don't think I can handle PPD, that's OK too.

After she gave birth to her first child, Morissette told Cliffe that she tried to fix her PPD herself by going on tour and self-medicating with alcohol, which only made things worse. Despite knowing she was depressed, Morissette said she delayed getting help for almost a year and a half, and convinced everyone around her that she was doing fine. Now that she's expecting her third child, she has a team of people at the ready so she can get help right away.

According to the Mayo Clinic, symptoms of PPD can include severe mood swings, excessive crying, difficulty bonding with your baby, withdrawing from family and friends, changes in appetite and sleep patterns, extreme fatigue, feelings of worthlessness, shame, guilt or inadequacy, trouble concentrating, panic attacks, and suicidal ideation.

Many people experience what's known as "the baby blues" after giving birth. However, the Mayo Clinic recommends that if symptoms don't subside within two weeks, it's time to consult a doctor. There is absolutely no shame in asking for help. You've just pushed a human being out of your body. You might feel physically and emotionally wrecked, and now you're responsible for round-the-clock care of a tiny person. It's OK not to be OK.

As with other forms of depression, people often need professional help to recover from PPD. Because no matter what people say, you actually can't just snap out of it. Depression doesn't work like that.

"After childbirth, the levels of hormones (estrogen and progesterone) in a woman’s body quickly drop. This leads to chemical changes in her brain that may trigger mood swings. In addition, many mothers are unable to get the rest they need to fully recover from giving birth. Constant sleep deprivation can lead to physical discomfort and exhaustion, which can contribute to the symptoms of postpartum depression," the National Institute of Mental Health said on its website.

Postpartum depression can be successfully treated with talk therapy and medication. The sooner you get help, the better the outcome for both you and your baby, the NIMH noted. In addition, if you know a new mother you suspect is experiencing PPD, "Encourage her to talk with a health care provider, offer emotional support, and assist with daily tasks such as caring for the baby or the home," the NIMH advised.

Even if you don't see classic signs of PPD, check in on your friend or family member often because a lot of people who are experiencing depression are really good actors. By the time they show it to you, it may have been going on for a while.

"I have said to my friends, I want you to not necessarily go by the words I'm saying and as best as I can, I'll try to be honest, but I can't personally rely on the degree of honesty if I reference the last two experiences [with PPD]," Morissette told Cliffe. This time, she says she is asking for help right away, and there is zero shame in her game.