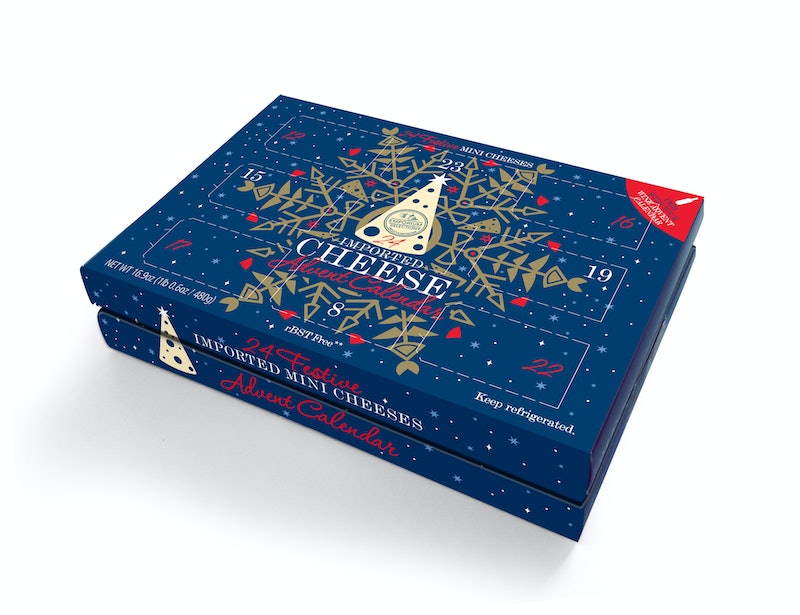 Big news, fellow cheese enthusiasts: Aldi’s cheese advent calendar is back for 2019 — and it goes on sale in just a few short weeks! Hitting stores on Nov. 6 — just after the Halloween season wraps up — the calendar will gift you with a tasty morsel of cheesy goodness every day as you count down the days until Christmas. Given how popular this calendar was last year, it’s no surprise that it’s set to make a triumphant return; here’s hoping it’s available in larger quantities than it was in 2018.

2019 marks the second year that Aldi’s cheese advent calendar has been available in the United States. Officially titled the Emporium Selection Advent Cheese Calendar, this delightful little box contains 24 “festive imported mini cheeses” — one for each day of the Advent period, which typically covers the three to four weeks leading up to Christmas. It will become available for purchase beginning on Nov. 6 at a price of $14.99.

(Worth noting: Technically, the starting date of Advent changes every year; the beginning of the period is always the fourth Sunday before Christmas day. Commercially, though, we usually think of it as running between Dec. 1 and Dec. 24 — hence why the vast majority of advent calendars contain 24 dates. Incidentally, in 2019, Advent does run from Dec. 1 to Dec. 24, so hey, this year’s crop of advent calendars is particularly accurate!)

We don’t know a ton about exactly what kinds of cheeses will be hiding behind each of the calendar’s 24 doors, but we can make some educated guesses, based both on the design of the box and on what ended up being in last year’s version. First, let’s look to the 2019 calendar’s box: Scrawled across the inside are a handful of phrases describing some general cheese varieties, including “savory and mild Edam cheese,” “nutty and delicious Gouda cheese,” “sweet, nutty, and rich Red Leicester cheese,” and both “sweet and strong” and “smooth and creamy” cheddar. I don’t know about you, but I’d be very disappointed if the calendar did not, in fact, include each of these options.

Then there’s the 2018 edition, which might give us an idea of what else we can expect. According to The Homespun Chics’ review of the “Happy Farms Preferred” cheese advent calendar, as it was called then, the box contained six pieces of Edam, five pieces each of Havarti and Red Leicester, and four pieces each of white cheddar and mature Gouda. The cheeses were all from the UK, Holland, and Denmark and weighed about 0.71 ounces each. In terms of presentation, The Homespun Chics did note that the 2018 calendar “[lacked] the zest and fun” of some of that year’s other options; however, the site also commented that the box was “attractive” and the cheese good, with the overall package making for a “reasonably priced and… pleasant departure” from the rest of the 2018 advent calendar crop.

At $14.99, Aldi’s 2019 cheese advent calendar is a few bucks more expensive than 2018’s edition; last year, the Happy Farms Preferred calendar cost $13. To be fair, though, it’s only a difference of $2. That’s not a huge jump, so the calendar can still be considered affordable — especially compared to, say, its boozier counterparts.

Oh, did I forget to mention that? The Aldi wine advent calendar is back for 2019, too — and it brought some new friends with it: Also on offer this year are a sparkling wine advent calendar and a beer advent calendar. The Festive Collection Wine Advent Calendar and the Beer Advent Calendar both contain 24 mini bottles of booze; they’re priced at $69.99 and $49.99, respectively, and will be available the same day as the cheese calendar, Nov. 6. The sparkling wine calendar, meanwhile, is meant to serve as a “Countdown To The New Year” date marker; as such, it contains only seven mini bottles, so as to cover the week between Christmas and New Year’s. Available starting on Dec. 4, it’ll set you back $24.99.

Both Aldi’s wine and cheese calendars sold out within minutes last year, so if you want to grab one this year, make sure you get to your local Aldi early; otherwise, you might find yourself paying a hefty markup for the same calendars on eBay if you absolutely cannot celebrate the season without one. You can find your nearest Aldi here. Good luck!