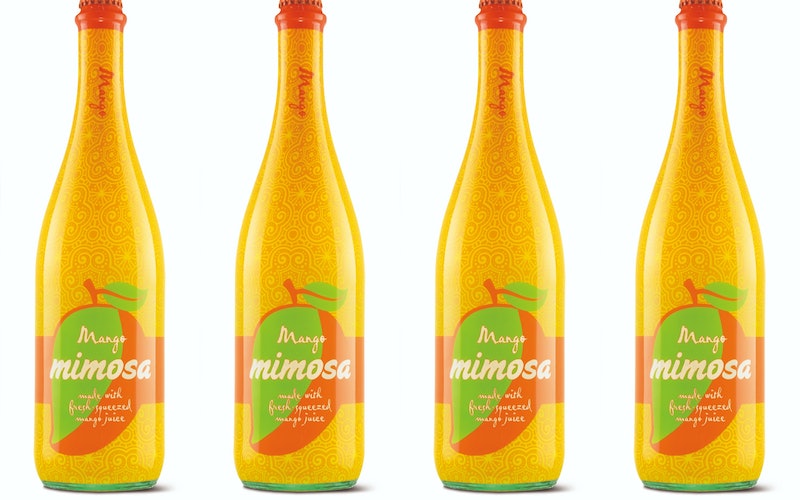 Aldi's June Finds have been announced! And since this place is known for some affordable adult beverage options, there's a few summery ones on the list this time around. For one, there's the Aldi Mango Mimosa bottles, which take all the hard, strenuous work out of making a mimosa.

OK, so mimosas are very easy to make and only require two ingredients. But, if you're going to a party or want to take a cold mimosa to the beach or a park, this is a somewhat more convenient way to do it. Just don't forget cups! (Or trust that the people you're with aren't sick and drink out of the bottle. Either way.)

The Mango Mimosas will be available June 19 for a limited time, and will only be $8.99 a pop, which is another reason that pre-mixed could be the way to go with your mimosa. Nine bucks is probably less than you'd be spending on wine and mango juice if you bought them separately.

Yes, I did say wine, not champagne or Prosecco. Ever since the Aldi mimosas were first launched in other flavors, they've included dry white wine and juice instead of something more bubbly. In the past, Aldi offered traditional orange mimosas in a bottle, as well as pineapple mimosas, both of which also costs $9. But even without bubbles, Cosmopolitan reported taste testing the orange variety and said the drink was still tasty: "Its dry white wine pairs well with the freshly-squeezed orange juice to deliver your favorite breakfast cocktail sans any sweet aftertaste." The site also noted that the ABV is 8%.

It might take a bit to get used to drinking a mimosa that isn't sparkling.(I imagine it would seem like drinking mimosa that went flat at first.) But there are some very positive reviews of the Aldi mimosas on Twitter. For instance, one user wrote, "The premixed mimosa bottle from Aldi’s? So awesome." Another posted, "the bottle of premade mimosa from aldi is so. damn. good." And another passionate Twitter user tweeted, "Aldi’s sells this orange mimosa. When I say it’s fireeee!!!"

While there are Aldi stores in many states throughout the U.S., if you are looking to buy the mimosa bottles, make sure that your local store sells alcohol, because not all locations do. You can find a store near you and determine whether it stocks alcohol on the Aldi store locator here.

In addition to the Mango Mimosas, Aldi's June Finds also include some other summer-appropriate alcoholic drinks. There's a Mar-Go-Rita Wine Cocktail ($4.99; available June 26), which is a ready-to-drink margarita-like beverage that's made with wine instead of tequila. (Aldi stores that sell alcohol sell beer and wine, but not hard liquor.) There's also a rosé sangria boxed wine ($9.99; available June 26), which follows in the footsteps of other boxed wines Aldi has offered. You'll have to add your own cut up fruit, but, conveniently, that's is also an Aldi Find this month. The store will have Red and White Sangria Blends ($3.49; available June 12), which are bags of frozen fruit that pair with either red or white wine sangria.

No matter what you go with, one thing is clear: Aldi is ready for some summer partying this year.