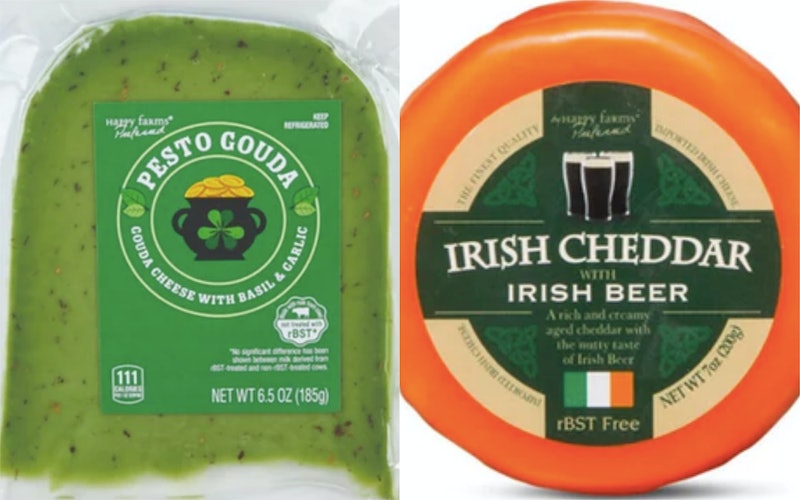 Aldi has long been known for their excellent wine options, but it's really been stepping it up with their cheese selection this year (gotta have something to pair with your full-bodied reds and dry whites, right?). And now, just in time for St. Patrick’s Day, Aldi has added five new cheeses to its roster — cheeses that are perfect for the holiday: Two of them are green; three of them are imported from Ireland; and two of them are made with Irish beer and whiskey.

According to People, the new cheeses are all made by Happy Farms, a staple of the brands found at Aldi. Starting on Feb. 27, folks will be able to snap up a Pesto Gouda, an English Sage Derby, and three Irish cheddars — an Aged Irish Cheddar, an Irish Cheddar With Beer, and an Irish Cheddar With Whiskey. All three of those cheddars, by the way, actually are Irish; People reports that they’re imported from Ireland. All the new picks are affordable, too; each is just $3.99 per block.

Some details about each cheese:

The Pesto Gouda is a colorful new riff on a long-standing classic. Indeed, gouda is one of the oldest cheeses still being made today; the earliest reference we have to it dates back to 1184. This version of it gets its bright green color from the basil and garlic pesto with which it’s made. (Bonus points for the pot of gold on the label.)

The English Sage Derby, meanwhile, is similarly green; however, it gets its color from a different ingredient: Sage. (Surprise!) A type of cheddar, Derby gets its name from the region from which it originates — Derbyshire in the UK — while Sage Derby’s magic ingredient and cheese-making produces “produce a glorious green marbling effect and subtle herb flavor,” according to specialty cheese resource Cheese.com.

Then there are the three cheddars. Oh, and hey, fun fact! Cheddar, like Derby, is named for its place of origin: It was first made in Cheddar, a village in Somerset in the UK. However, cheddar is made in many locations now (and, in fact, there’s only one remaining cheddar producer in Cheddar itself) — and Irish cheddar is top notch. Aldi’s is described as “rich and creamy” with a “tangy taste.”

For the curious, Irish whiskey differs from Scottish and American whisky in more than just the spelling, according to the delightfully-named whiskey resource Whiskey For Everyone: Irish whiskey is typically distilled three times, while in Scotland and the United States, it’s only done twice; additionally, Irish distillers tend not to use peat, so it doesn’t have the smoky quality for which Scotch is known. Just, y’know, FYI.

Clearly folks are loving these literally cheesy trends, so maybe we’ve got more to look forward to in the future, too. You can find your nearest Aldi here.