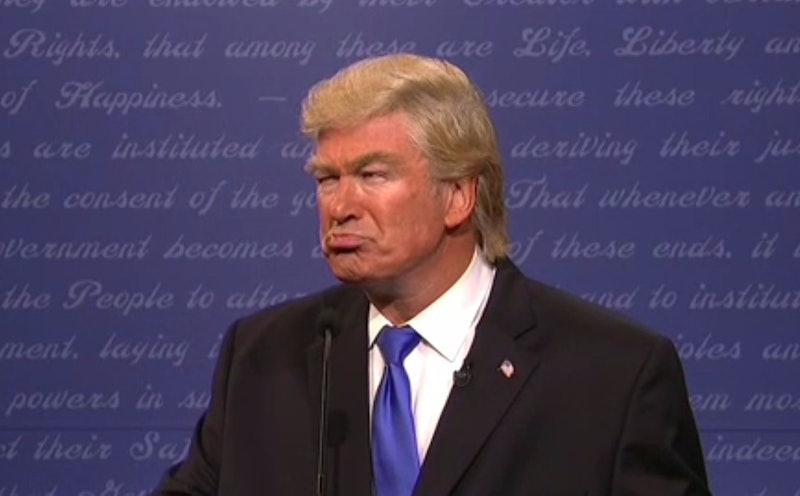 Donald Trump is now president of the United States and it's been hard to work through. But the comedy of it all has been on point in light of recent events. Alec Baldwin's on-point Trump impressions on Saturday Night Live has been a source of relief and levity during the 2016 election and Trump's victory. And that's why it was super exciting when SNL announced via Twitter that Alec Baldwin is hosting SNL for a record-breaking 17th time on Feb. 11 with Ed Sheeran as musical guest. While his Trump impressions are definitely amazing, I think all his time on the episode shouldn't be spent in that specific character. There's a lot more to Baldwin on SNL than Donald Trump — and he has 16 previously hosted episodes of the show to prove it.

One "bit" I would love to see pursued that has absolutely nothing to do with our current president is something that plays on the friendly competition between Baldwin and Steve Martin, another SNL favorite. The two have both hosted SNL more than any other humans, with Baldwin surpassing Martin's 15 times in 2011 — so that "rivalry" has got to play in somehow. It's only recently that Baldwin took a Trump impression to SNL, but fans shouldn't forget his legendary past work on SNL. Remember his classic performance in an NPR-inspired radio skit called "Delicious Dish"? Enough said.

Don't get me wrong, I want, nay, need Alec Baldwin to stick out his lower lip in that oh-so-special way. Donald Trump is already allegedly instituting policies that have many Americans on edge, and I think we could all use a laugh. But at the same time, I don't need the entire emphasis to be on that one bit.

And Baldwin doesn't need SNL to get his Trump on — the actor got into character at an pre-inauguration protest outside Trump's International Hotel and Tower in New York to the cheers of the crowd. While I definitely agree that I can always use some more Baldwin-as-Trump, I don't need the entire focus of an episode to be on the president and some time away from politics would be appreciated.

No matter if Baldwin does the whole thing as his version of Trump or not, President Trump might just be tuning in and tweeting his feelings afterwards, as the commander-in-chief has done for past episodes of the show. Almost consistently after Baldwin's performances, Trump has tweeted statements that describe Saturday Night Live as "unwatchable," "totally biased," and "sad."

I'm confident SNL on Feb. 11 is going to be great, because Alec Baldwin is consistently brilliant as a host and guest star. No matter what sort of comedy the gang chooses for the evening, it's bound to give fans some humor during these tough times.