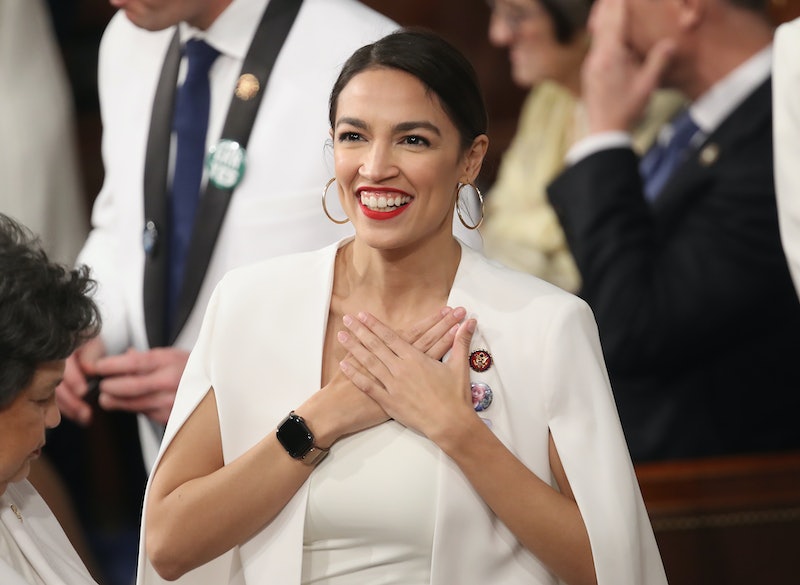 Twitter lit up on Tuesday as Rep. Alexandria Ocasio-Cortez made plans with Queer Eye's Bobby Berk, the interior design expert for the "Fab Five." It looks like the Netflix star is gearing up to remodel the freshman congresswoman's office while he's in Washington D.C.

Ocasio-Cortez and her staff work in the Cannon House Office Building. After receiving a good lottery number in the suite assignments process in November, she was able to choose a room that was fairly spacious and well-lit, according to the New York Post.

But that doesn't mean the office's decor is in great shape. As Ocasio-Cortez tells it, she's had a makeshift setup while she and her staff focus on more pressing matters. Currently, she thinks the highlight of the office's design is probably a wall of post-it notes that Ocasio-Cortez's supporters left outside her door at the beginning of her term.

But Berk might swoop in and help out. "Hey @AOC!" he tweeted on Tuesday morning. "I'm in DC all week girl! Put me to work! 'Have time... will work for democracy!'"

"Swing by our office!" the congresswoman replied. "We've barely had time to hang anything up, three of my staffers are expecting babies, and we've got a bach pad/warehouse type situation out here. SOS! (The good news is that people are leaving a rainbow of positive post-its on our wall so that's cute)."

Here's the exciting part: This Twitter exchange might actually lead to a meeting IRL. It seems like a Berk and Ocasio-Cortez rendezvous is actually going to happen.

Just a minute after the congresswoman wrote to him, Berk replied, "Yay! Would love too [sic]! Sending you a DM now!" After realizing that Ocasio-Cortez's page doesn't allow for direct messages, he asked her to send him one, and she replied, "I gotchu." So it's possible that they hashed out the details on Tuesday, and Berk will really stop by for some redecorating later this week.

Her office couldn't be in better hands. Berk may not be the Queer Eye fan favorite (possibly because the design process tends to get less screen time on the show), but he's still beloved. Cosmopolitan's Hannah Chambers calls him the "most underrated" character, "the literal angel emoji," and praises how Berk "seemingly executes each makeover without a single hiccup."

Many viewers consider Berk's task — completely remodeling the client's home — to be the hardest of the Fab Five's jobs; Geek.com's Stephanie Mlot writes that he's usually "out-working the rest of the team."

Berk has been involved in interior design for the last 20 years, according to his website. He launched a company in 2006 and a full-service, custom-made design practice in 2015. But of course, he's perhaps best known as one of the stars of Queer Eye, a reboot of Queer Eye for the Straight Guy that's been running since early 2018. The show has become massively popular and was even considered by some critics to be the best show of last year.

It seems fitting that a lead from an enormously popular show would team up with one of the most popular representatives on Capitol Hill.