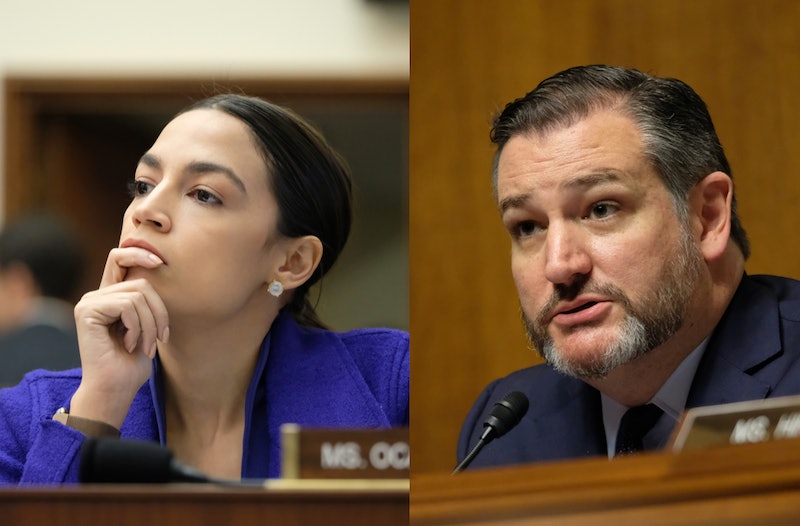 Every now and then, lawmakers from opposing ends of the political spectrum will find themselves seeing eye to eye. In what some may call an unexpected turn of events, Ted Cruz and Alexandria Ocasio-Cortez tweeted about teaming up to tackle lobbyist influence on Capitol Hill, The Week reported.

Over time, both Cruz and Ocasio-Cortez have separately decried former Congress members becoming corporate lobbyists and using their influence for political gains. "Here's something I don't say often," Cruz tweeted on Thursday. "On this point, I AGREE with @AOC. Indeed, I have long called for a LIFETIME BAN on former members of Congress becoming lobbyists."

In what appeared to be cautious optimism, Cruz then added, "The swamp would hate it but perhaps a chance for some bipartisan cooperation?" In her original tweet, Ocasio-Cortez said that former Congress members who become lobbyists shouldn't be able to "leverage [their] service for a lobbyist check."

It looks like both lawmakers may even work on a bill to address the issue. In response to Cruz's agreement, Ocasio-Cortez proposed, "If we can agree on a bill with no partisan snuck-in clauses, no poison pills, etc — just a straight, clean ban on members of Congress becoming paid lobbyists — then I’ll co-lead the bill with you."

"You're on," Cruz responded.

Earlier in May, Ocasio-Cortez gave her Twitter followers a look into how, she said, political lobbying worked. "When I was looking at lobbying from the outside, just as a normal voting citizen, it appeared to me as more transactional in nature than it actually is," she tweeted.

"It's not necessarily that a lobbyist calls you and says, 'Vote or don't vote for this bill or we won't donate to you again.'" Instead, according to Ocasio-Cortez, corporate lobbying would "identify" bills that had to be "killed." Such lobbyists, she tweeted, "come up with 'sensible' talking points to make [their] intent and say [a] policy is 'misguided,' then schmooze policymakers in secret into accepting said talking points."

In her tweet, Ocasio-Cortez linked to a report from The Intercept that highlighted how a lobby firm called Center Forward treated lawmakers to drinks and music at a luxury resort in order to ultimately criticize Medicare-for-All as a proposal.

In May, Ocasio-Corte said of lobbyists in general, "It's that bundle of [money] for elections, so you pick up their call, accept invites, become friends. In practice, it's not transactional; it's social."

For many, Cruz and Ocasio-Cortez agreeing on the same topic is strange because both lawmakers have publicly feuded with each other on Twitter. In April, Cruz mocked Ocasio-Cortez's support for a livable minimum wage, at $15, on Twitter.

The New York Democrat originally tweeted that croissants at the LaGuardia Airport were being sold for "seven dollars a piece" and that "some people think getting a whole hour of personal, dedicated human labor for $15 is too expensive." To this, Cruz said, "Oh the humanity! Here’s the answer: government-mandated FREE CROISSANTS FOR ALL."

Those differences, however, seem to have been put aside for the moment. It looks like the unlikely duo may join forces to create a bipartisan pact aimed at changing lobbying.