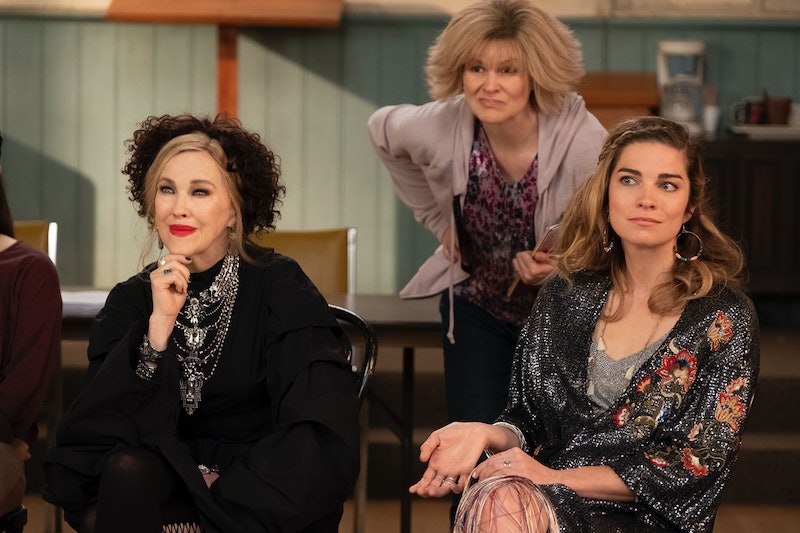 Hide your diamonds, hide your exes, because a lot of Alexis is barreling towards you in a cute, huge yacht. On the Feb. 27 episode of Schitt's Creek, we learn that Alexis (Annie Murphy) had a brief career as a reality star/singer, and the results...were glorious. "A Little Bit Alexis" on Schitt's Creek served as the theme song for her short-lived, 2007 reality show by the same name. And not only do we now know this incredible Easter egg, but the former socialite also sings an a cappella version of her single during an audition for Cabaret (with dancing). And fortunately for Schittheads everywhere, we now have the full track in all its breathy, talk-singing glory.

We already know that Alexis led a bizarre, jet-setting existence before arriving in Schitt's Creek, which "A Little Bit Alexis" explores in detail. The song lyrics are the stuff of legend, with lines like, "I'm a hieroglyphic / I'm an open book / I'm a little bit cray-cray / If you steal my look." According to a tweet from Schitt's Creek star co-creator Dan Levy, Murphy wrote the song herself, and Murphy clarified in her own post that she penned "A Little Bit Alexis" with the Canadian band Hollerado. O Canada, we stand on guard for Annie!

The danceable track riffs on real pop songs from the era — most noticeably Britney's "Work Bitch." However, "A Little Bit Alexis" is also a nod toward rich socialites who release terrible, overproduced singles, such as Tiffany Trump's 2011 "Like a Bird," Paris Hilton's pre-DJ music career, and Kim Kardashian's iconic "Jam (Turn It Up)." Even so, there's hints of Alexis's distinct personality in the song, her unfounded confidence coming through loud and clear. She exclaims, "Ew, David!" at one point, and calls herself expensive sushi. And although there's no mention of her former lovers like Aroon, Stavros, or Prince Harry (maybe they dated after her hot single dropped), Alexis declares that she's a little bit single even when she's not.

What's more, "A Little Bit Alexis" is a legitimate banger, and fans can't seem to stop listening to it. It's an incredible feat of songwriting, and honestly, an entire wing of the MoMa should be dedicated to it.

Paired with Alexis' incredible audition dance, and "A Little Bit Alexis" has already entered the Schitt's Creek musical hall of fame (alongside Moira's "Oh Danny Boy" funeral performance and David's Tina Turner lip-sync, naturally). And since Murphy hinted on Twitter that a music video might be coming, there may be a little bit more Alexis on the way. Vroom vroom, bitches.