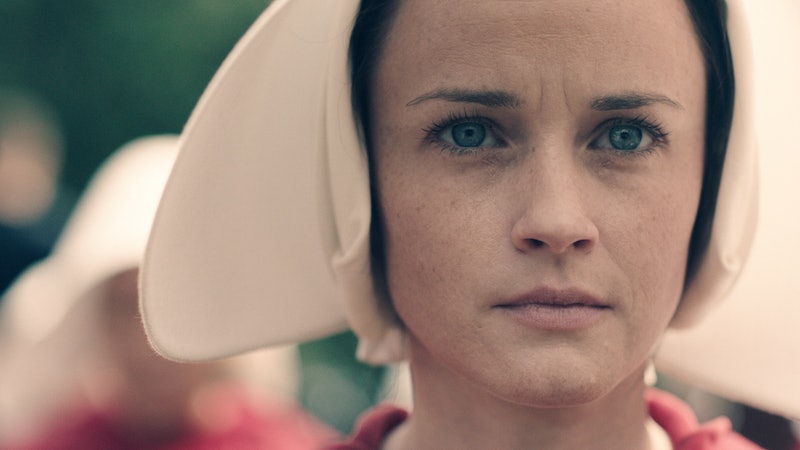 When things are feeling particularly crazy, one thing that always helps me is a reminder that we're all in this together. For that reason, it actually reassures me to hear that Alexis Bledel says The Handmaid's Tale was hard to shoot after the election. It's not that I ever want other people to be in a bad way just because I am, but the sensation of heaviness that Bledel describes feeling on set after Nov. 8, 2016, is the same one that I and many others have felt ever since.

"I only had a few scenes to shoot after the election. I certainly felt a great heaviness coming back to finish out my scenes," Alexis Bledel said to Vulture, when asked how her experience shooting the show changed after Donald Trump was elected. "I might have had just one scene left, but when I see it I can tell what headspace I’m in because it just felt so heavy."

Yup, that's pretty familiar. And, somehow, knowing that the feeling is shared actually makes me more optimistic, especially because the smash hit Hulu show is so difficult to watch in and of itself. I don't want to spoil anything, but, depending on how far you are into the episodes, you've definitely had to cringe your way through a few moments. The show is incredible, from the writing to the acting to the story and beyond, but it's not something I'd recommend watching with a glass of wine to unwind.

It's nice to be reminded that the actors have thoughts and feelings too, and they can be just as nervous about the things happening in this uncertain political climate as the rest of us.

But Bledel points out that there are positive aspects about the show as well, that we can carry through to real life:

I think that the show really depicts women as very strong, capable, and inventive, and there are a lot of really positive things that people can take away from it and hopefully find strength in the story. I certainly did, and Lizzie and I did talk about the strength of the characters — that reserve that they have. There’s so much fortitude underneath all of their vulnerability. They’re very careful, and not bold. They can’t be bold in Gilead. But within, they’re incredibly dynamic and incredibly strong.

I've figured out how to use some of that strength in my personal life and to shore up my boundaries against the crazy world around me. Now, if I can just summon some of it in order to be strong enough to get through some of the more intense episodes of The Handmaid's Tale, then that will be perfect.